An important fishing port of Morocco, Agadir owes its fame to its fine sandy beaches and sunshine for about 10 months a year.
Average temperatures are between 7°C and 22°C in January, they can go down to 2°C and up to 31°C in some years. 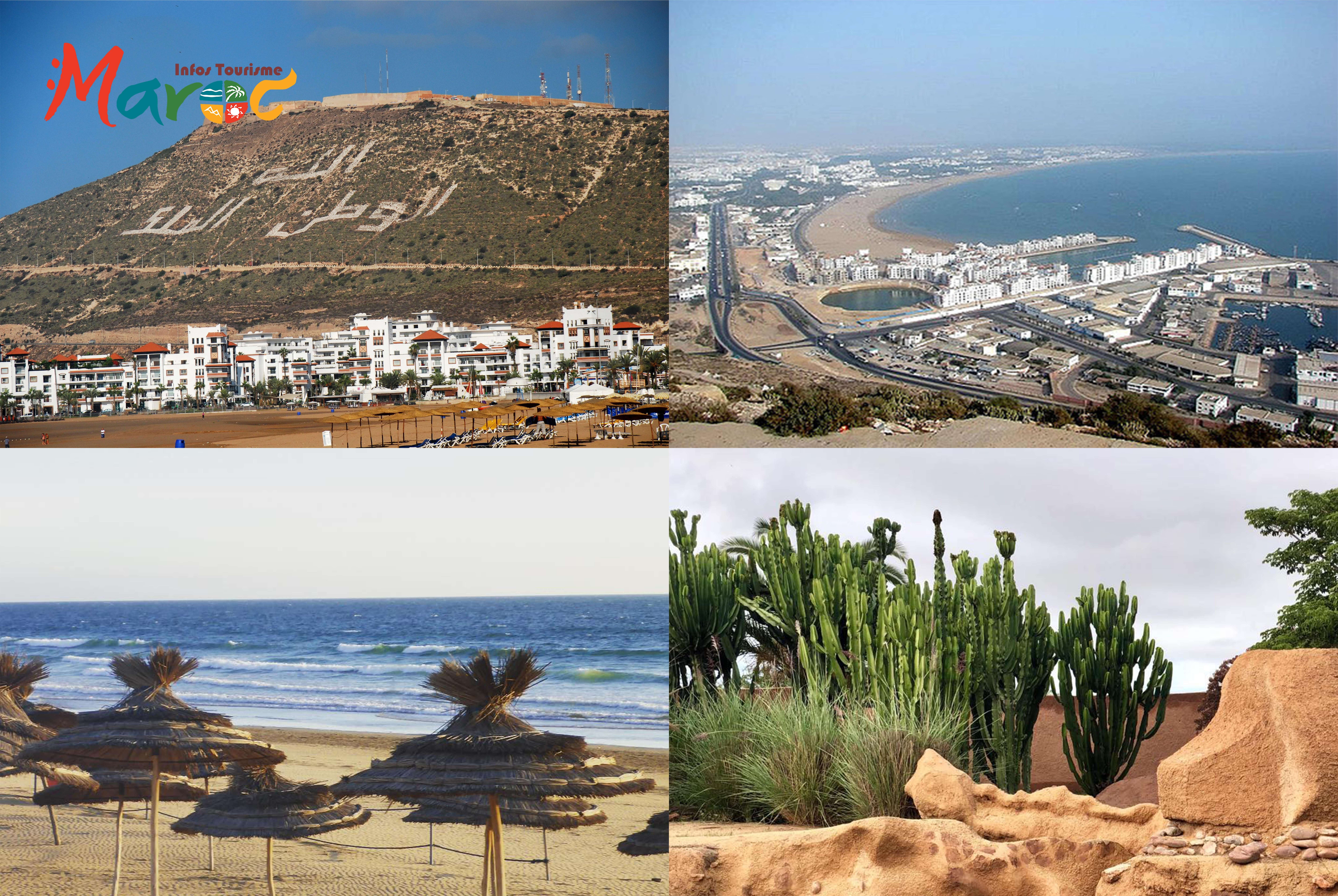 Agadir is less than an hour's flight from cities such as Casablanca and Marrakech, and fewer than three hours from the major capitals of Europe and West Africa. It is accessible by sea and by motorway and has an excellent air service.
It is a true-to-life city with a marina.

Asilah is located 45km south of Tangiers. With its white houses and narrow streets, it enjoys sunshine for about 5 hours a day with temperatures in January between 10°C and 17°C on average. 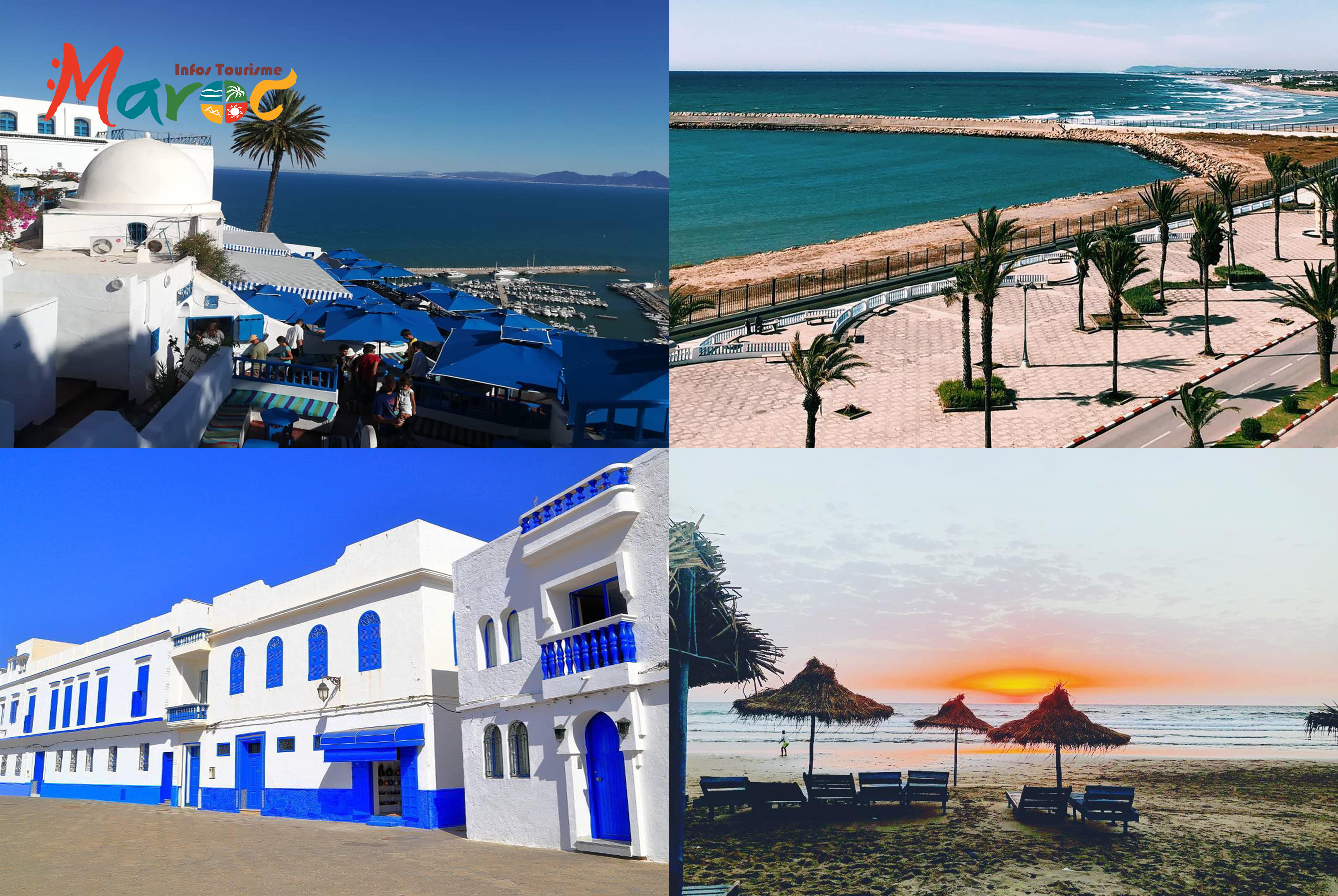 Today it is a seaside resort of increasing popularity for visitors. It has a rich history with its Portuguese ramparts built in the 15th century and its beautiful beaches.
Asilah is the top destination for hippies and cool cats as it is an artist-oriented city and has been for many years.

Casablanca enjoys about 5 hours of sunshine per day at this time of year. Average temperatures are between 11°C and 18°C in January. 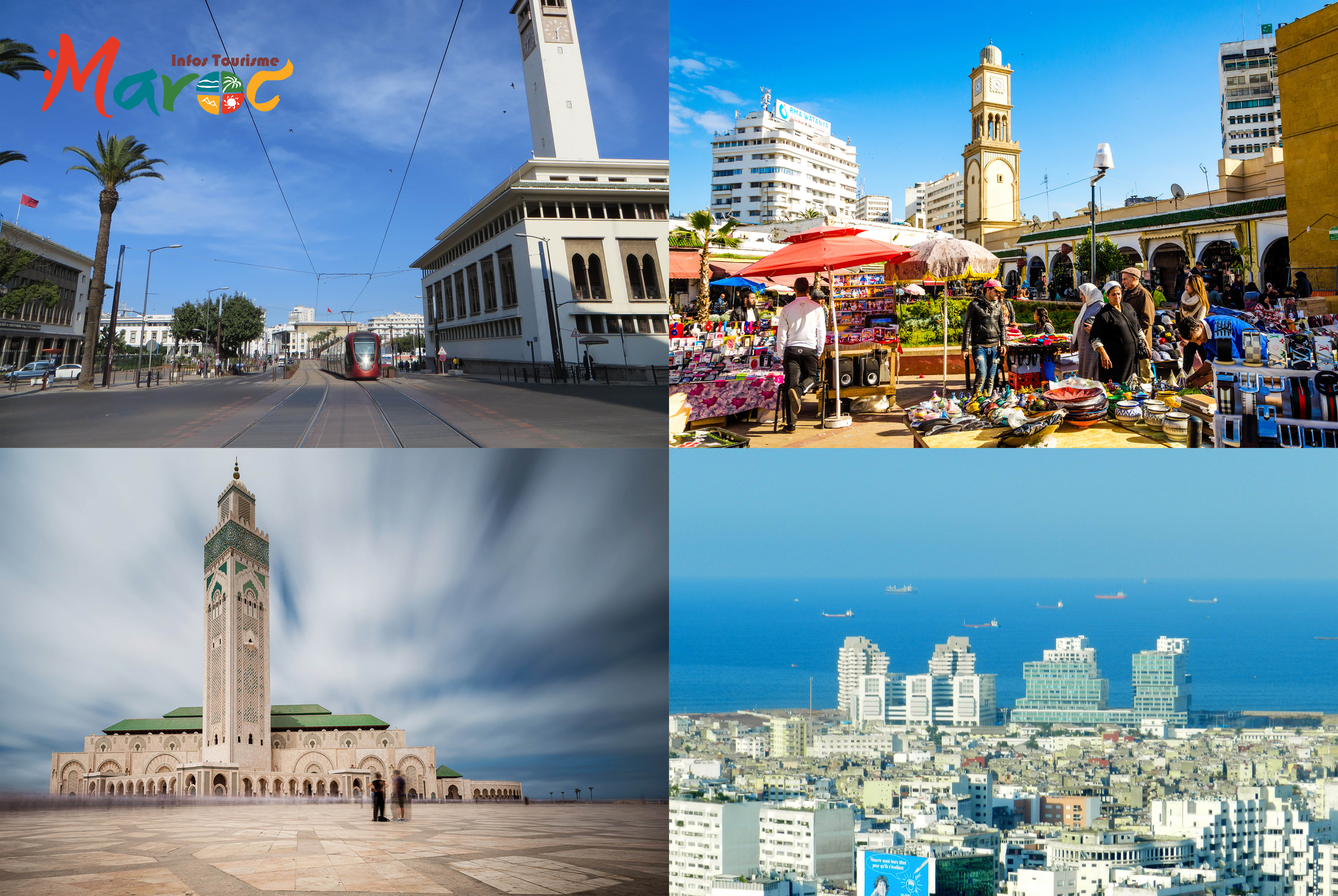 Casablanca, Morocco's largest city, located 90km south of the capital  Rabat and stretching along the Atlantic coast, is the economic and commercial capital of the Kingdom.
With an estimated population of 4.75 million it is the third largest city in Africa after Lagos and Cairo.
Casablanca is distinguished by its architecture with its old Medina, its urban districts, its large buildings from the time of the protectorate and its art deco edifices. After independence it became known for the construction of skyscrapers, administrative buildings, company headquarters, shopping malls, banks, hotels, social, cultural and sports facilities.

Chefchaouen gets about 5 hours of sunshine per day in January with an average temperature between 11°C and 18°C. 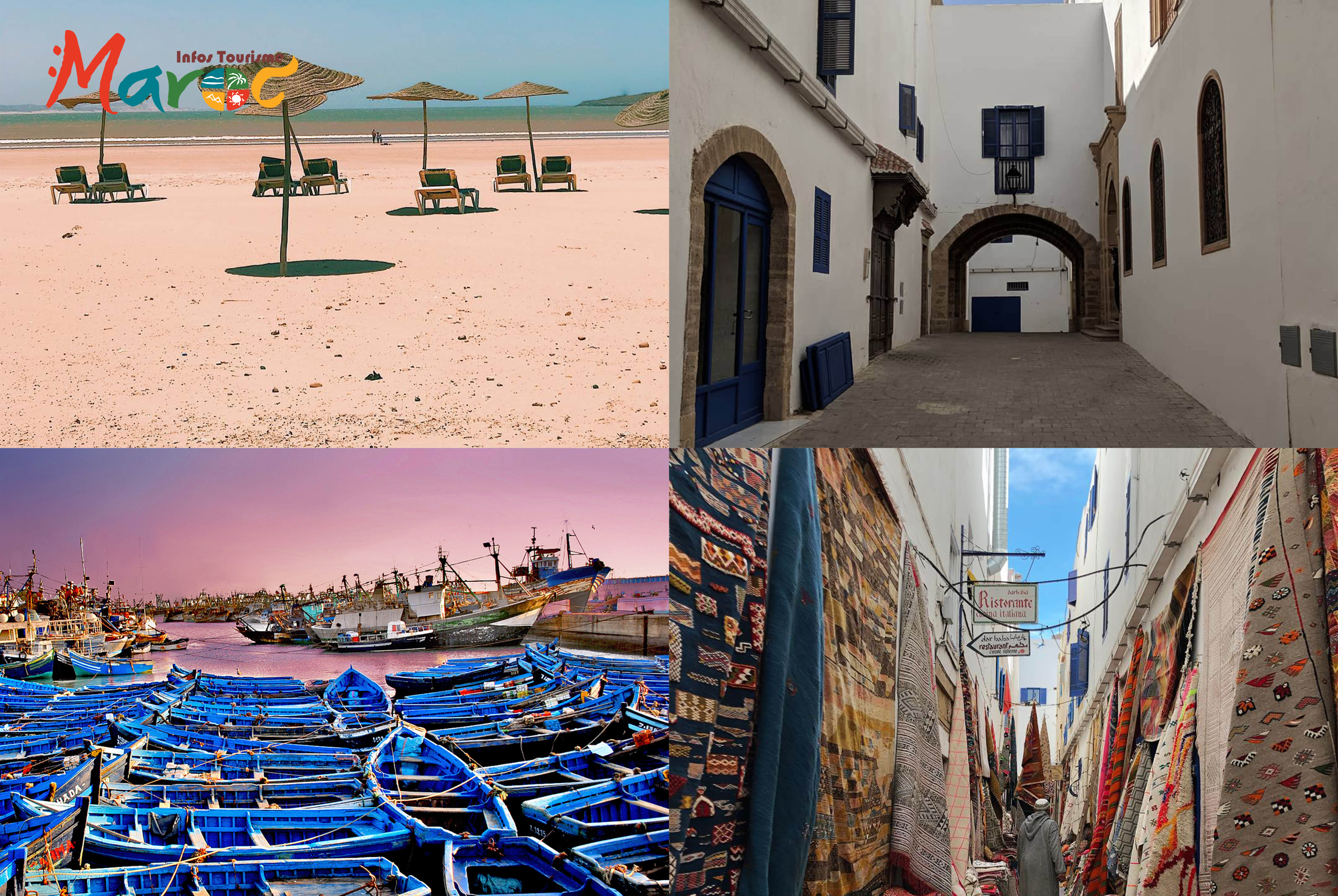 This small town of about 40.000 inhabitants at about 660m above sea level and with very little car traffic,  it has clear and fresh air and invites you to spend a few days to discover its beauty and its surroundings.
The varied colours of the different products in the bazaars contrast with the dazzling bluish white of the houses.
The alleys that inevitably wind their way to the meeting and resting point of the Place Outa El Hamam, will charm you and take your mind on an idyllic voyage.

Essaouira gets about 8 hours of sunshine a day, with temperatures averaging between 11°C and 19°C in January.
At the foot of the Great Atlas, Essaouira is built on a rocky peninsula.
With a large choice of leisure activities to make your stay more enjoyable, from aquatic activities to other land-based activities, you will have a great time.
All around the region there are plantations of argan trees. This is an opportunity for tourists to see and appreciate argan oil, unique in the area around Essaouira and down to Agadir.

Fez enjoys about 5 hours of sunshine per day. Average temperatures are between 5°C and 16°C in January. 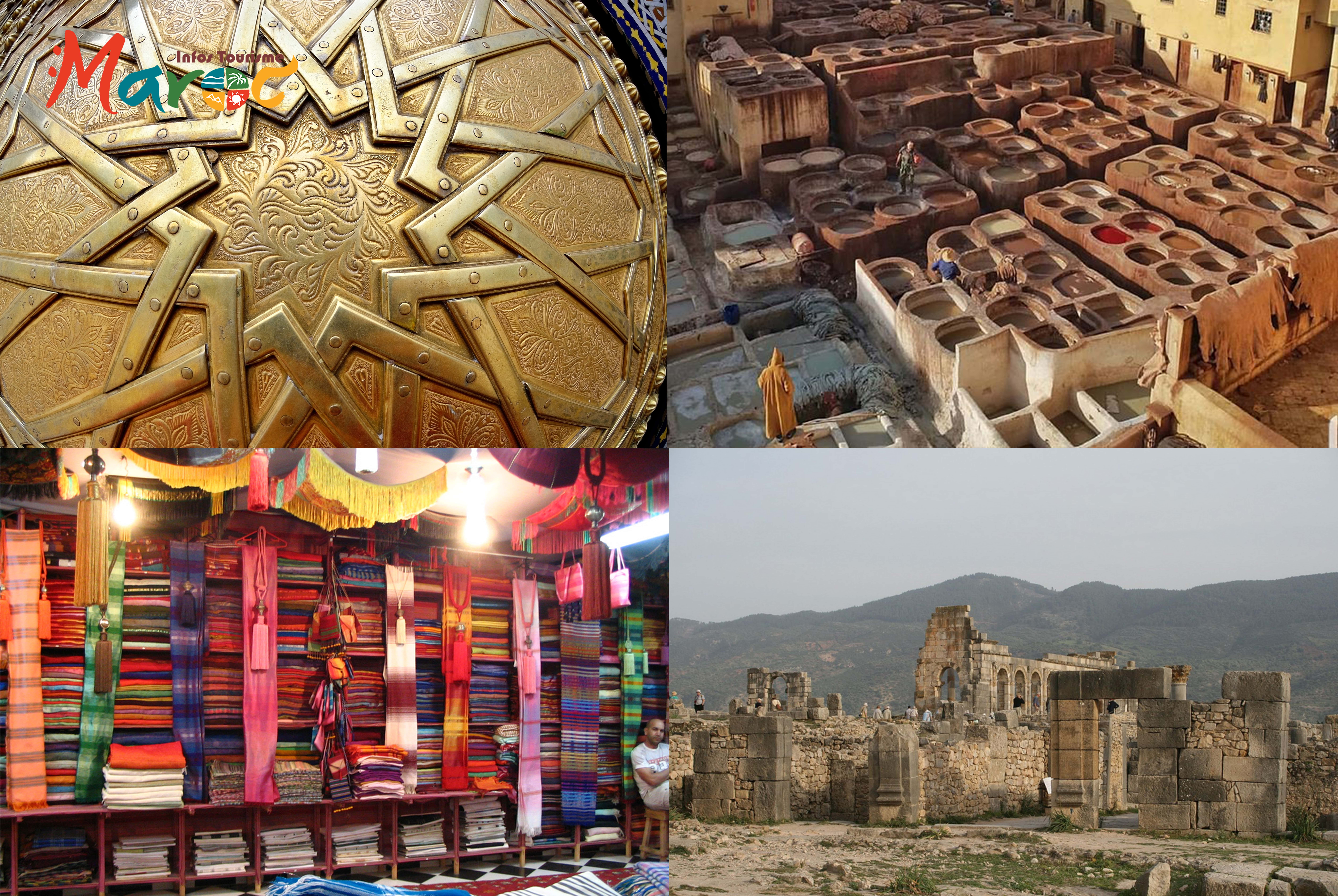 This imperial city is the capital of Morocco's traditional culture. A cradle of knowledge, its superb madrassas are its flamboyant symbol.
The medina of Fez, listed as a World Heritage Site since 1981 and home to a variety of craft activities, is the most visited area in the region. Then the mountain area and its spas make the region an ideal destination in January.
As well as all this tourist potential, the region of Fez Meknes is also the capital of thermal therapies. 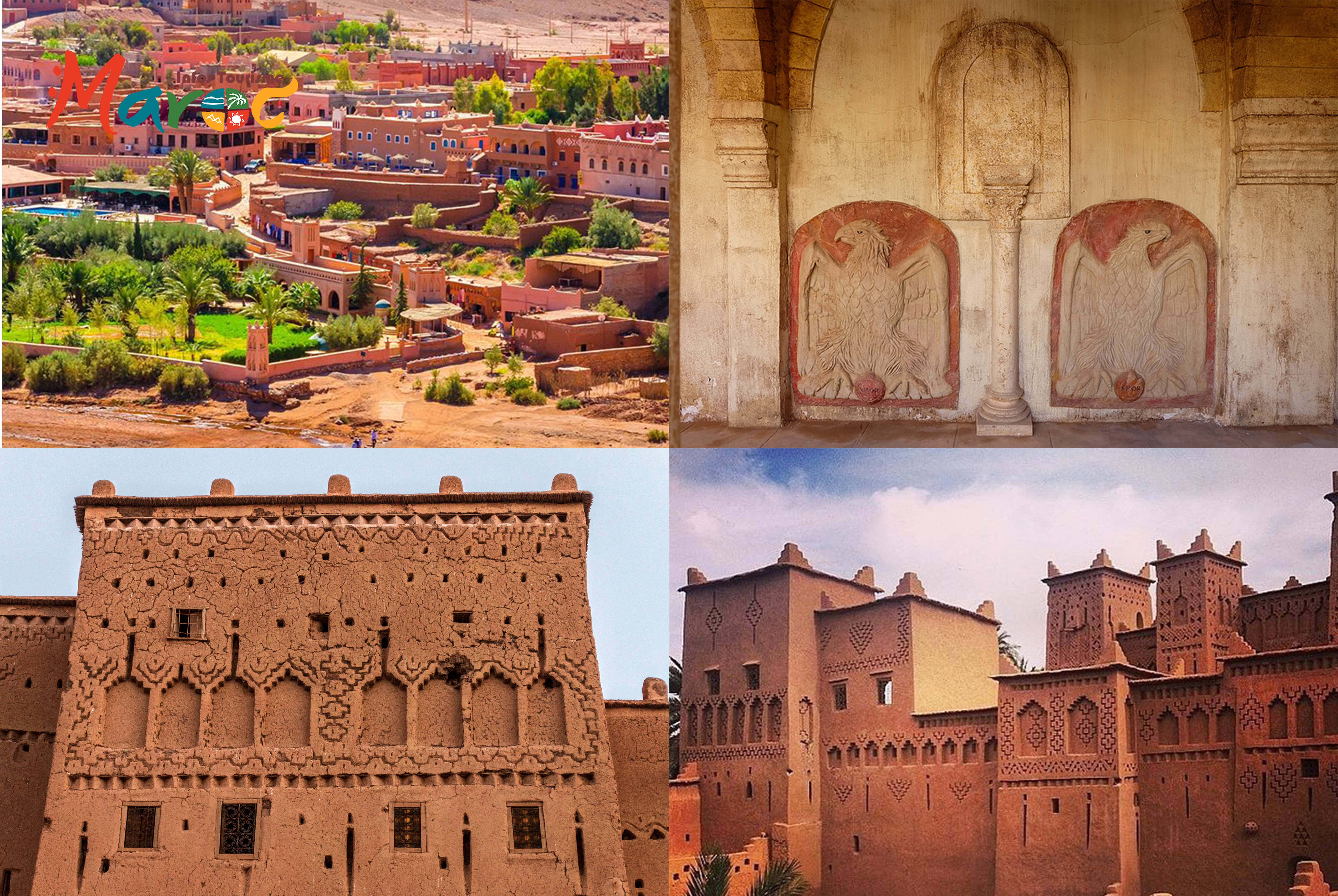 In January, Ouarzazate enjoys a good 7 hours of sunshine per day. Average temperatures are between 3°C and 18°C.
The majestic Ouarzazate, a mixture of Kasbah, oases, flourishing valleys and a vast desert plateau, attracts tourists of different nationalities, filmmakers, adventure-seeking tourists, writers seeking serenity and tranquillity and those who only want to spend a good holiday.