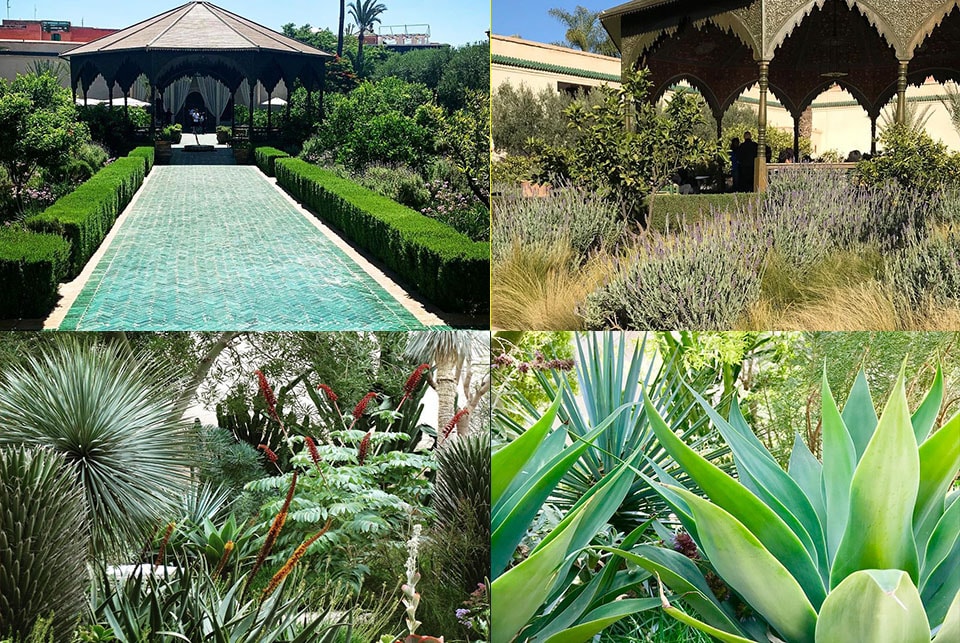 The Secret Garden is made up of two very distinct parts, each of them being considered as a riad.
Surrounded by high walls without windows, the riad, with a rectangular plan, is built around a vast garden.
In the centre of the latter, where the intersection of two raised walkways divides into four parterres, stands a marble basin.
The pavilions of the Secret Garden, ornamented by porticoes with pointed arches and wooden lintels, have beamed ceilings, double doors and low windows.
The green spaces of the Secret Garden are now divided into exotic and Islamic gardens. 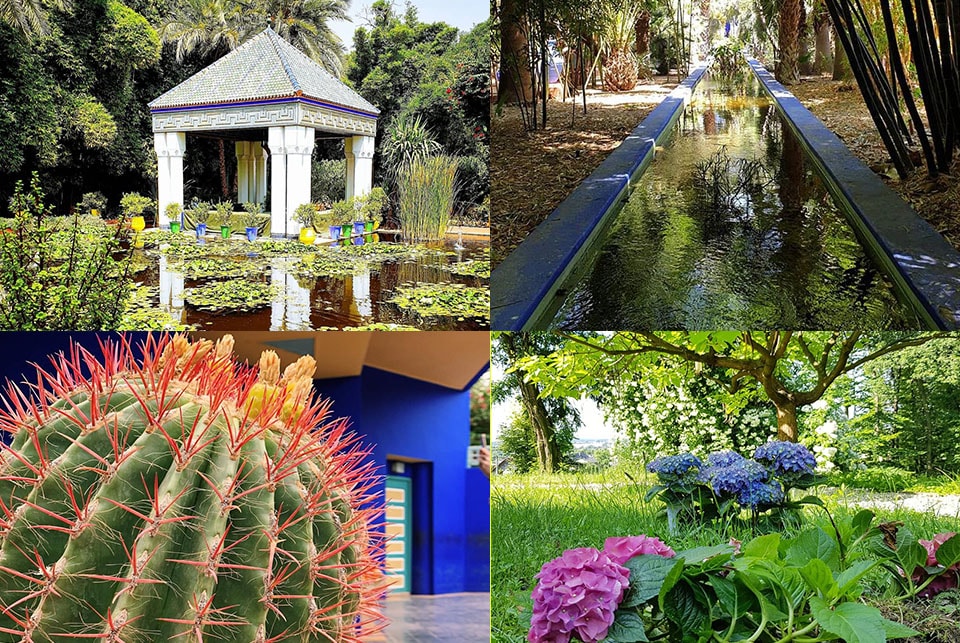 The Majorelle Garden, which covers 9,000m2 today, is one of the most enchanting and mystical gardens in Morocco.
The beauty of its exotic plants as well as the inventiveness of their arrangement make this place an invitation to reflect and contemplate.
This haven of peace and greenery was created in the 1920s by the French painter Jacques Majorelle, botanist and great lover of Moroccan flora.
In 1980, Yves Saint Laurent and Pierre Bergé, who discovered Morocco in 1966, bought the Jardin Majorelle to save it from a hotel complex project that would have resulted in its destruction. 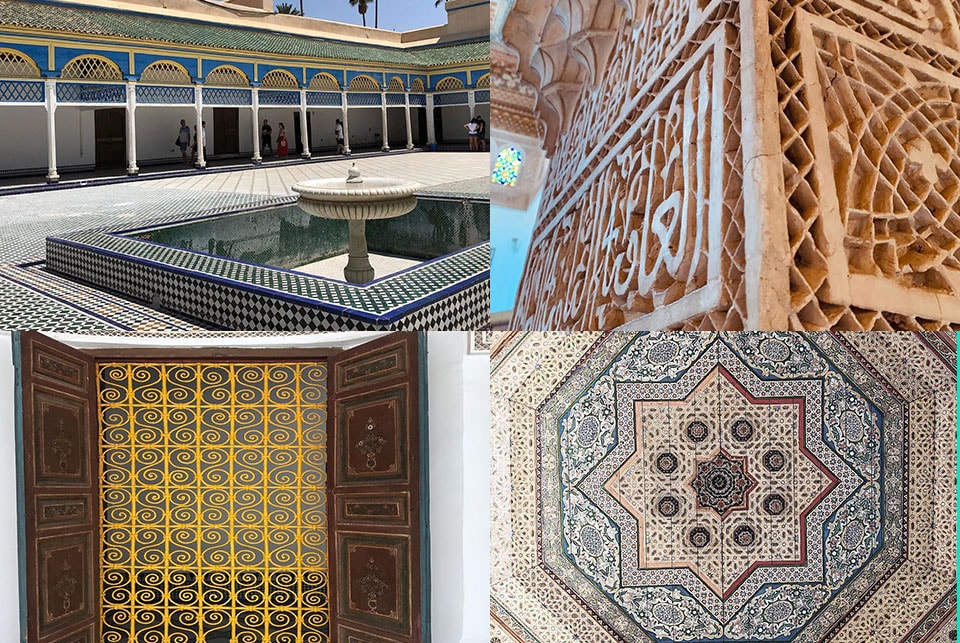 This is one of the masterpieces of Moroccan architecture, one of the major monuments of the country's cultural heritage and one of the main tourist destinations in Morocco.
The palace is open to visitors, to Arab-Andalusian music concerts and art exhibitions.
The palace is made up of about 150 rooms richly decorated with mashrabiya, marble, beech and cedar wood carvings and paintings, stucco, zellige, the first stained glass windows of the Maghreb all housed in heterogeneous buildings. They have no established order and are organised around numerous green and refreshing Islamic patios and a garden planted with orange trees, banana trees, cypresses, hibiscus and jasmine which are irrigated by khettaras. 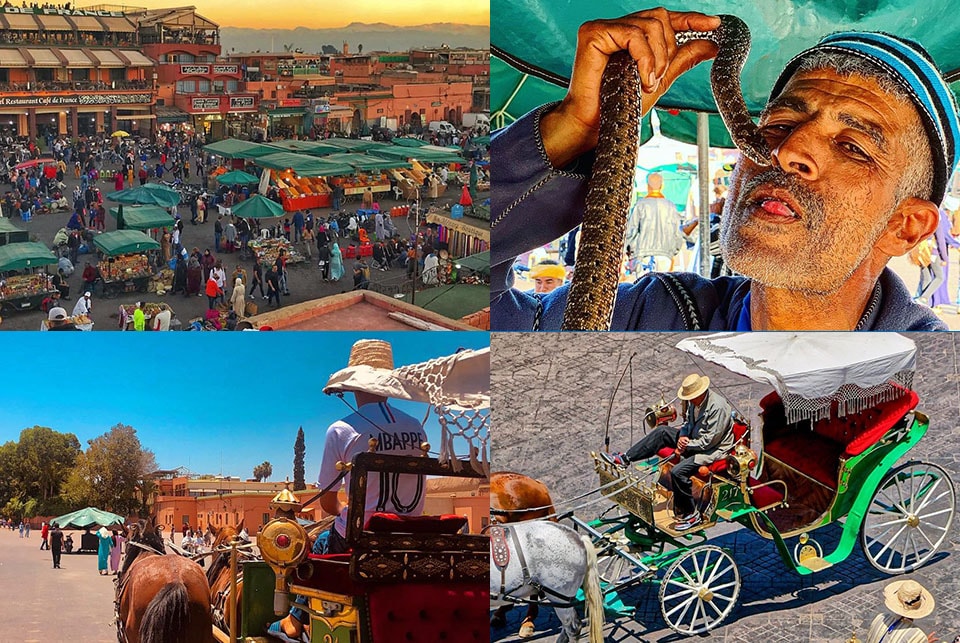 Djemaa el Fna square is a must see in Marrakech. The real show starts later, towards the end of the afternoon (from 5pm, it's ideal).
This is when the Gnawa dancers, descendants of the black slaves of Guinea, appear and the Amizmiz acrobats come to perform their human pyramids and spectacular dervish pirouettes, to the delight of the crowds of onlookers.
The square becomes a monumental theatre stage where each actor takes his place in the centre of a circle formed by the spectators,
This is the time to watch the public scribes crouching in the shade of their black umbrellas, toiling over their work, to muse among the itinerant salesmen, to listen to the storytellers tell you about the djinns hovering over the city's minarets or evoking the fabulous treasures of the ancient sultans with treasures hidden in abandoned riads in the medina or to be told your fortune by veiled clairvoyants. 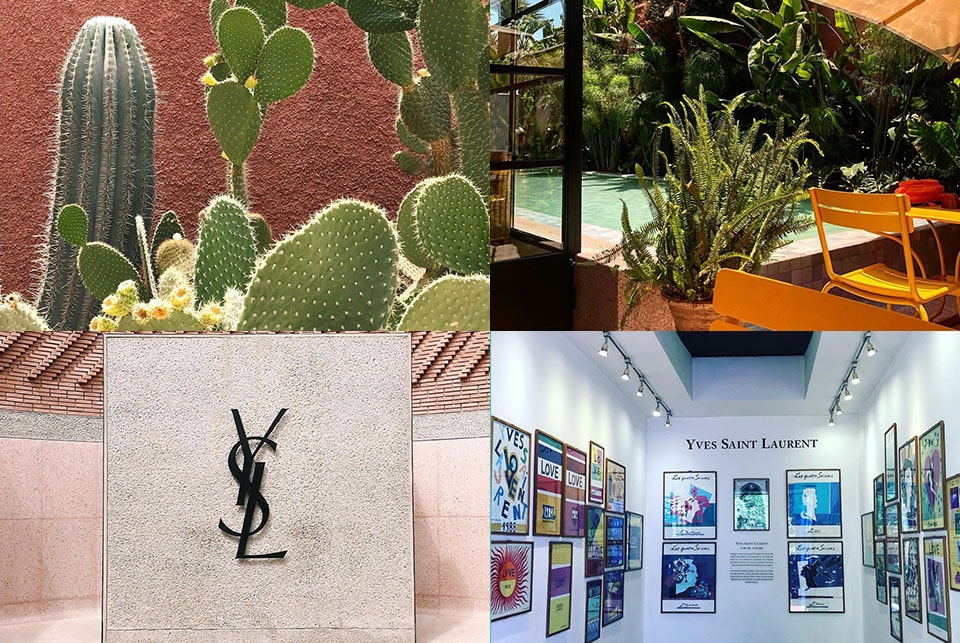 This contains part of the "Pierre Bergé-Yves Saint Laurent" Foundation's collection, which includes haute couture clothes and accessories, as well as various drawings and objects. It is displayed in a permanent exhibition space of 400m2.
We discover the first black tuxedos, the Bougainvillea cape inspired by the Majorelle garden, the embroidered Van Gogh jackets, the famous Mondrian dress. To better appreciate these wonders, the visitor can see an original screenplay by Christophe Martin.
The building also houses a 150m2 temporary exhibition room, a 130-seat auditorium, a bookstore, a café-restaurant with a terrace and a research library.
It includes some 5,000 works dedicated to the work of Yves Saint Laurent and to fashion, but also to literature, poetry, Andalusian-Arab history and geography, botany and Berber culture. 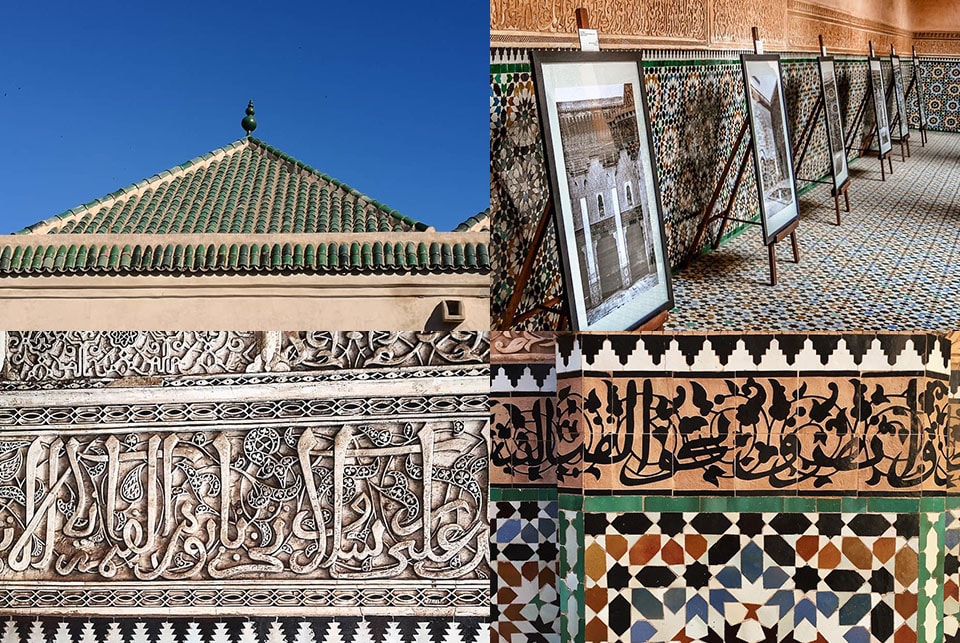 The Ben Youssef Madrassa, one of the largest madrassas in the Maghreb, is one of the most remarkable historical monuments of Marrakech and is undoubtedly worth a visit. The entrance door of the madrassa opens first on a long closed corridor decorated with mosaics and carved beams and is rather dark because it is only lit by skylights.
The madrassa is open every day from 9:30am to 6pm, and only until 3 pm from April to September. It is closed on the 1st of May and on religious holidays. The entrance fee is 40 Dhs per person. 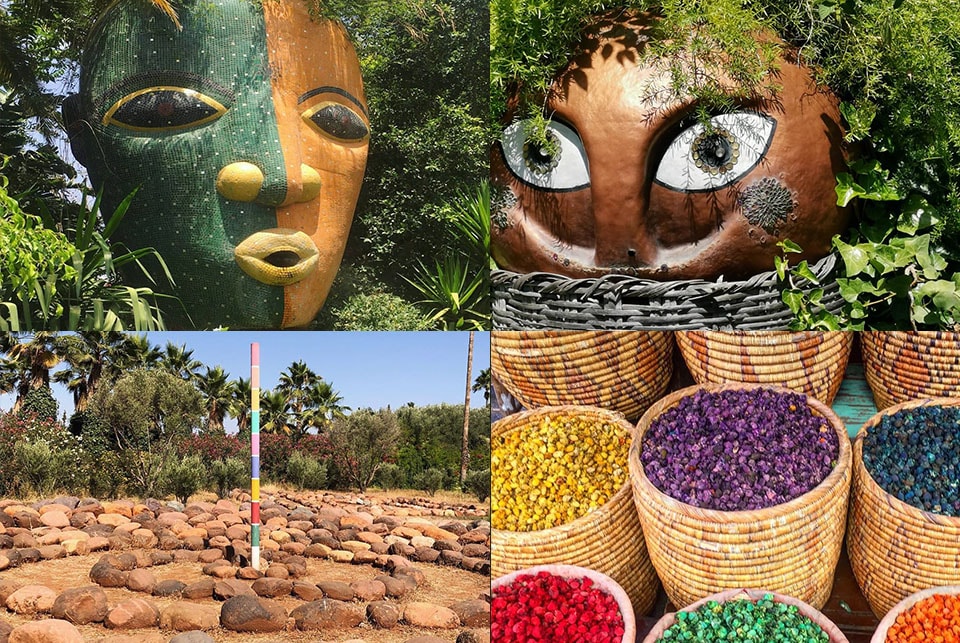 The wonderful garden of the artist André Heller offers a new and magnificent curiosity close to the city of Marrakech.
It is located 27 km outside the city, in the Ourika Valley. 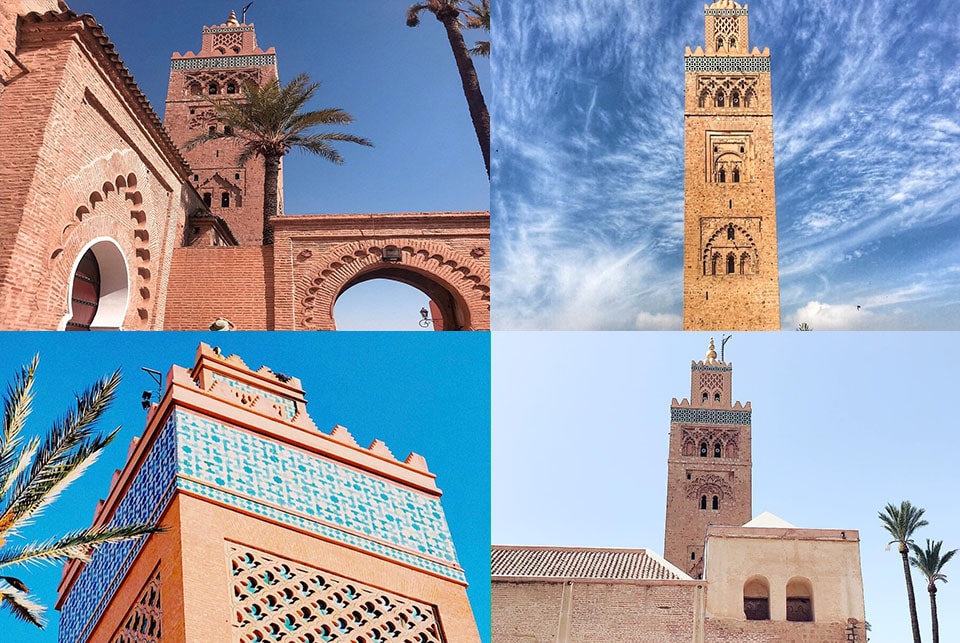 This is one of the most emblematic mosques of Morocco. Its architecture is representative of the art of the Almohads.
Its minaret is 69 metres high, it has 17 naves and its exterior decoration is very sober having few ornaments. The minaret - surmounted by three gilded copper balls - is the most decorated element of the Koutoubia, and for good reason: the minaret was built later and was therefore not as influenced by the austere architecture of the Almohads.
The building was restored in its entirety in the spirit of the original plans in the 1990s and its immense minaret reappears today in all its beauty. 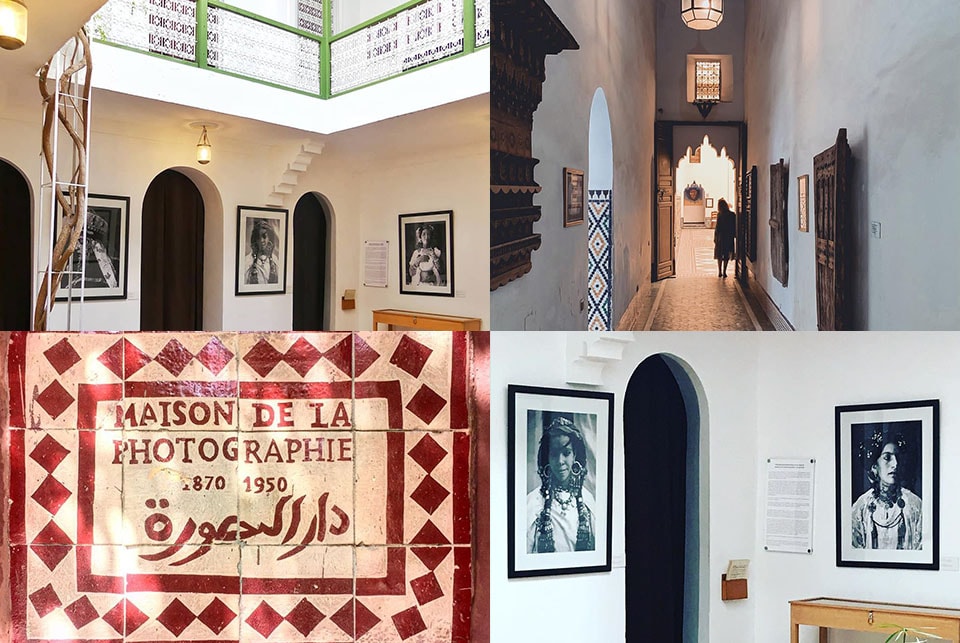 This lovely dar plunges one into the daily life of Moroccans between 1870 and 1950, with portraits of local inhabitants and scenes from their lives.
Fascinating thematic exhibitions are organised in the House of Photography, but also in schools and various cultural institutions.
The museum also has a superb roof terrace with a breathtaking view of the Medina of Marrakech.