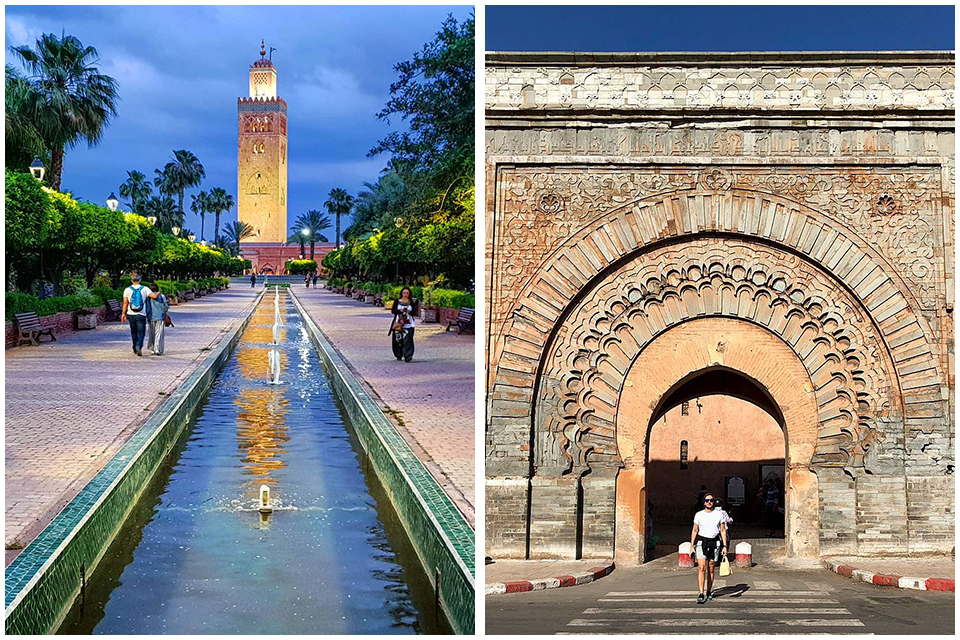 The exotic destination of Marrakech. You will certainly take a little bit of Marrakech home with you as an unforgettable dream as it’s a place full of surprises! With its countless markets, gardens, palaces and mosques, you'll be amazed. Also called the red city, Marrakech is the fourth largest city of the Kingdom after Casablanca, Fez and Tangiers with more than a million inhabitants and it remains the tourist capital of the country. More than a city, Marrakech is a pearl polished by history and has known how to welcome its guests with open arms since the beginning.

The city of Essaouira has a strong tourist potential, thanks in particular to its natural, historical and cultural assets and has thus become a major tourist destination. Its medina, a UNESCO World Heritage Site, the islet of Mogador, its port dating from the 18th century, and its beaches, which allow the practice of water sports, make the province a quality tourist destination. Located on the Atlantic coast, Essaouira is a fishing-port city on the Atlantic coast with a population of about 78,000. The city is 173km north of Agadir, 174km west of Marrakech, and 316km south of El Jadida.
A lively seaside resort overlooking the Atlantic Ocean, is a true pleasure of old-style architecture yet modern too, with hotels set in traditional Moroccan Riads within the old town which is increasingly English-speaking. 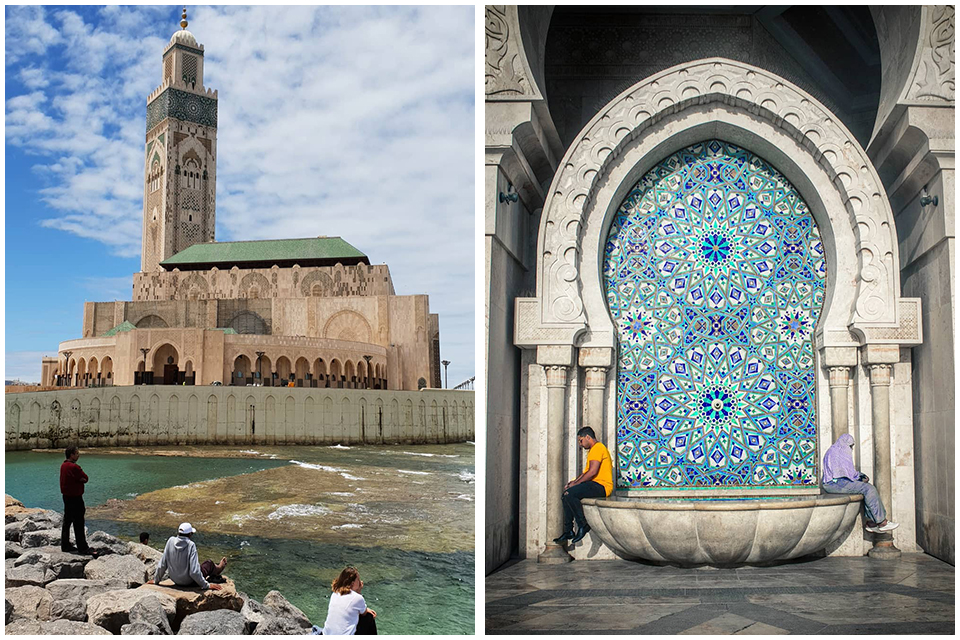 Casablanca has grown from a small town to one of the largest thanks to its new forms of modern architectural construction and it has become a major industrial and commercial centre more open to the Western way of life than other cities in Morocco. Casablanca is today the economic capital of Morocco and its largest city, located on the Atlantic coast and bordered by beautiful beaches that make it a seaside destination too. It is about 80km south of Rabat, 100km from El Jadida in the south via the motorway and  has a population of over 4 million, making it the most populous city in the Maghreb. 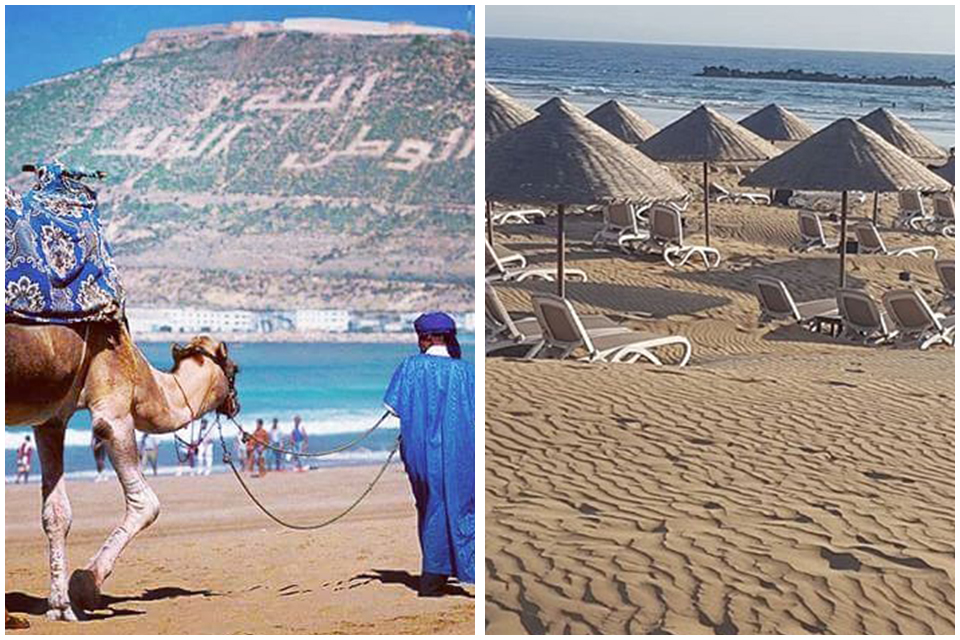 The ocean offers immense beaches about 10km in length. Here, the softness is that of fine sand and the caress of the sun. It is a paradise all year round, just 3 hours from the main European cities. Agadir is an Amazigh city in southwest Morocco, located on the Atlantic coast in the Souss region, 508km south of Casablanca, 173km from Essaouira and 235km west of Marrakech. With 900,000 inhabitants it is in a beautiful location and has an idyllic climate that will make you forget all your worries. Lined by palm-fringed boulevards and its waterfront bars. Agadir, the premier seaside resort of Morocco, has a decidedly very western atmosphere because of its modernity and the many visiting tourists. 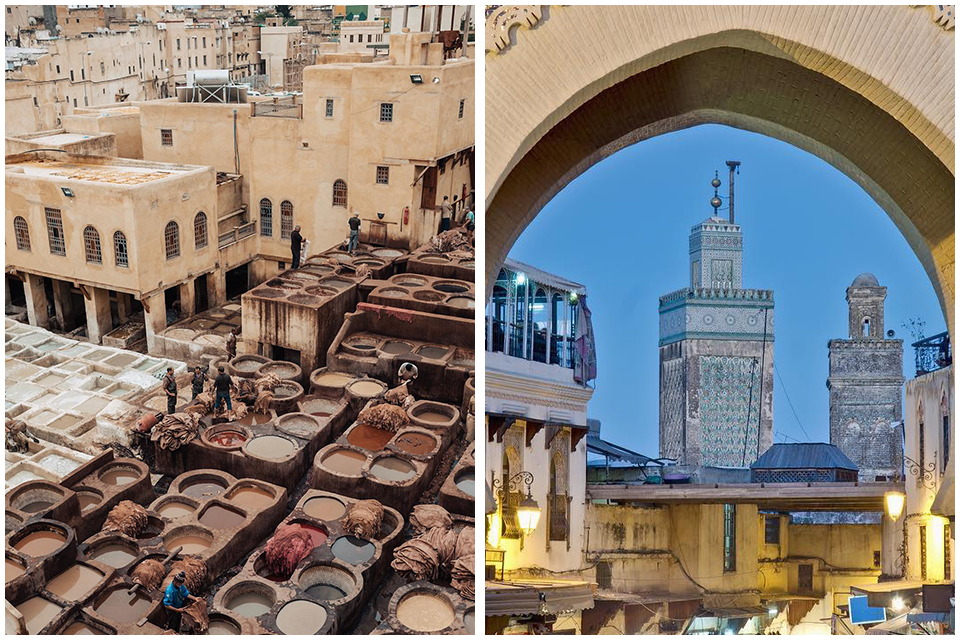 This imperial city is the capital of the traditional culture of Morocco. A cradle of knowledge, its superb madrassas are its flamboyant symbol. This fortified city, listed as a UNESCO World Heritage Site, will take you back to the Middle Ages. Located inside the medina, the entrance to the Bab Bou-Jeloud district is through its huge 1913 gate, decorated with blue and green tiles, the colours of the city. Fez has two sections, the old city and the new one. 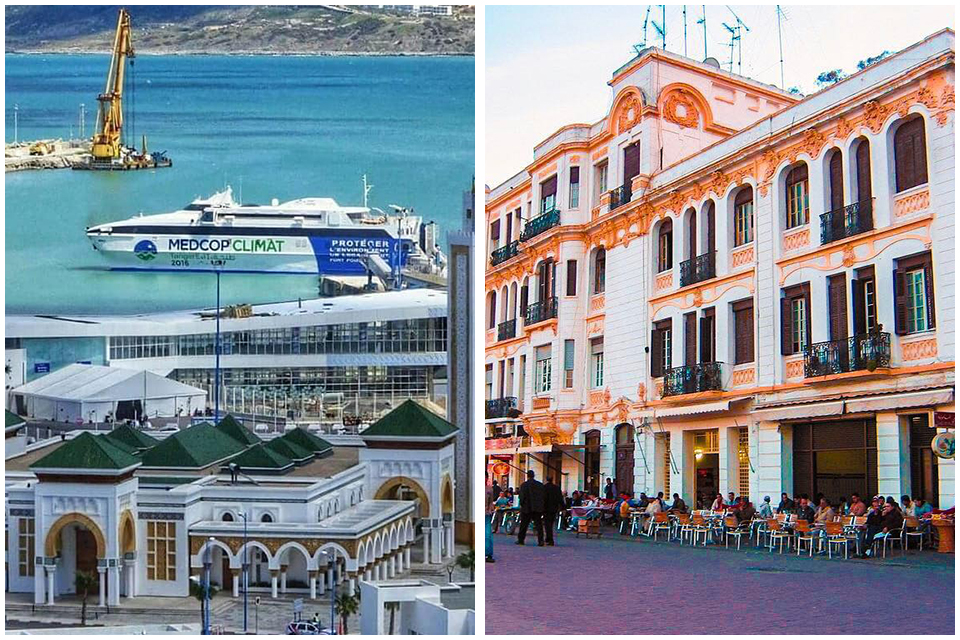 Tangiers long served as an unofficial cultural capital for a number of writers and artists from all over the world, it also attracts property developers mainly from the Rif and elsewhere. Located on the Strait of Gibraltar that separates Africa from Europe, about 15km from the Spanish coast, and on the edge of the Rif mountain range, it offers an exceptional view of the other side. Tangiers has long been an important strategic location. With two thousand five hundred years of history, it has a population of one million today and is one of the oldest cities in North Africa. Its medina, Kasbah, bazaars and souks are among the most lively in the country, and its beaches are superb, about 7km long. In the last century Tangiers became one of the favourite places for the international jet set. An important seaside resort, Tangiers has a varied hotel and tourist infrastructure, and a medina that attracts huge numbers of visitors, where Spanish is spoken more often than French. 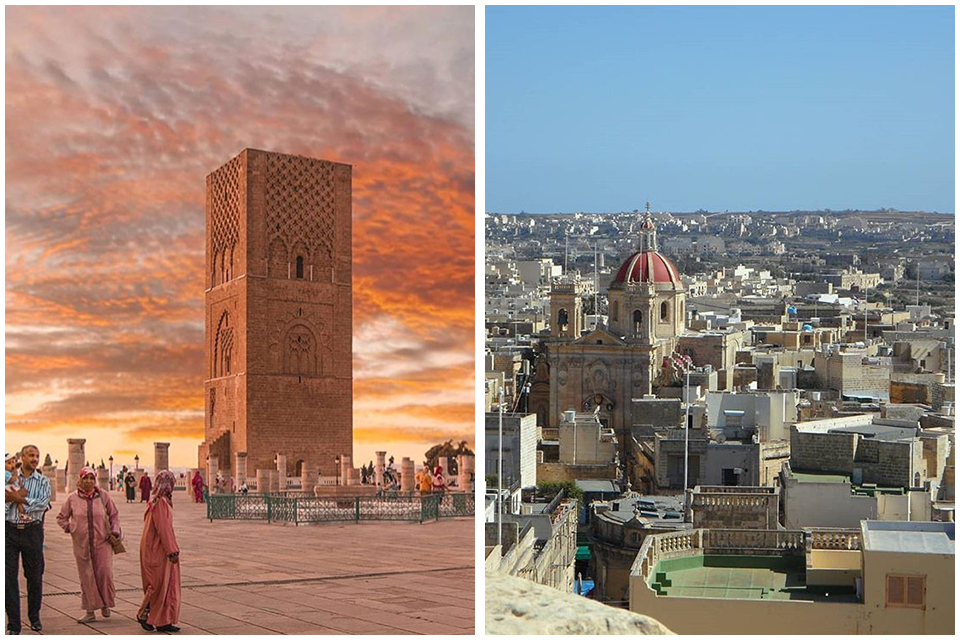 A coastal town, its coastline is almost 60 kilometers long with a succession of rocky creeks or fine sandy beaches and its hinterland offers an ideal ecological diversity for hiking. Rabat is the administrative capital of Morocco and is located on the Atlantic coast and on the left (or south) bank of the mouth of the Bouregreg River opposite the city of Salé. These two cities are for this reason dubbed "twin cities". It has a population of just over a million. A pleasant climate all year round, a privileged location on the edge of the Atlantic and an exceptionally rich history all make Rabat a first-class tourist destination. It benefits from a unique historical heritage, reflecting the diversity of civilisations that have shaped the Two Banks of the Bouregreg over the centuries. Rabat is one of the few cities that has preserved its historical and cultural heritage. Since June 2012, a group of sites in the city of Rabat was inscribed on the UNESCO World Heritage List as cultural patrimony. The ministries and the governmental administration are to be found there and of course the Royal Palace. 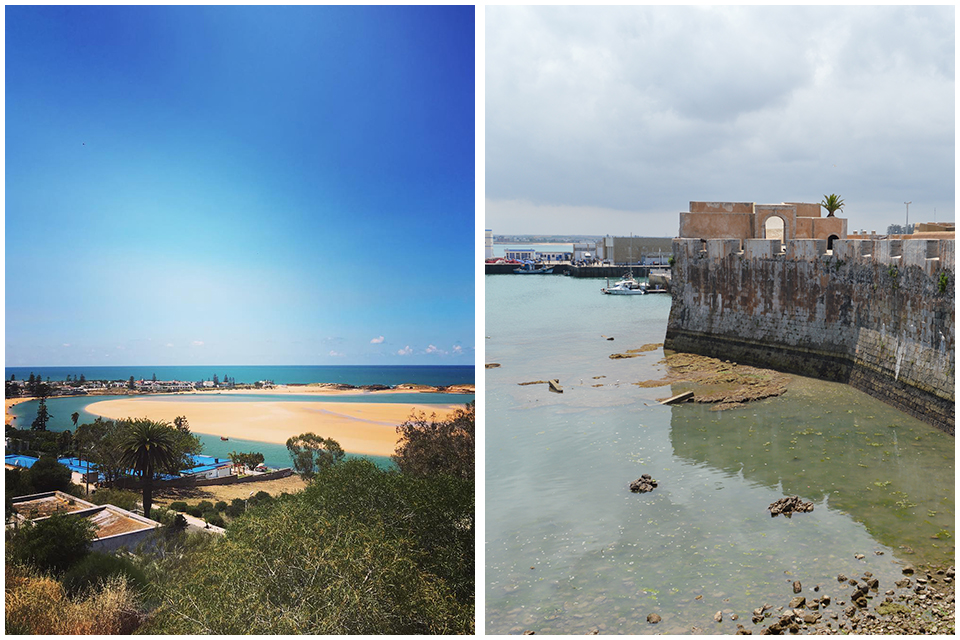 Known for its remarkable "Portuguese City" listed as a UNESCO World Heritage Site, the fortifications of the Portuguese city with their bastions and ramparts are an early example of Portuguese military architecture of the Renaissance. The Portuguese buildings still visible are the Portuguese cistern, the fortress of Mazagan and the Church of the Assumption built in the Manueline style. Located 96km from Casablanca with a growing population of 300,000 mostly speaking French as a second language, it is one of the developing cities in the tourist field which attracts more and more local and foreign visitors. Retirees also settle there thanks to its geographical location on the ocean shore, its benign microclimate, a good quality of life and its value for money. With the commencement of the “new” city of El Jadida being built on the road to Azemmour and guaranteed to be carbon neutral, El Jadida is a city of the future. 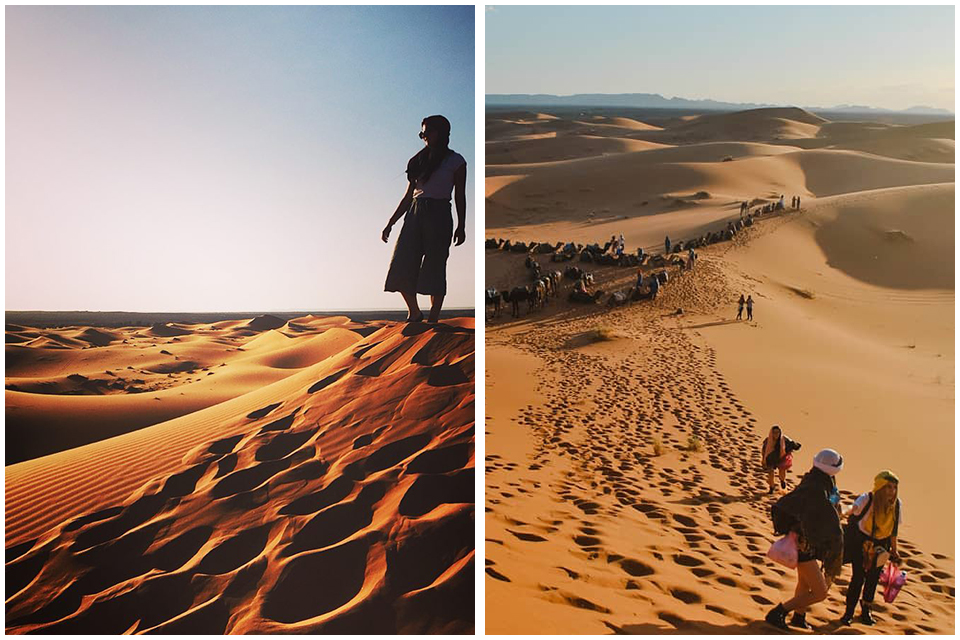 The dunes next to thevillage of Merzouga are nestled in the Moroccan desert. Merzouga is famous for its huge sand dunes in the region Draa-Tafilalet of the province of Errachidia. Many activities are available there such as camel riding, quad biking on the dunes, sandboarding, nights under the starry sky, hiking in the desert to admire the beauty and the changing colour of the dunes. For an adventure, Merzouga is the perfect place. 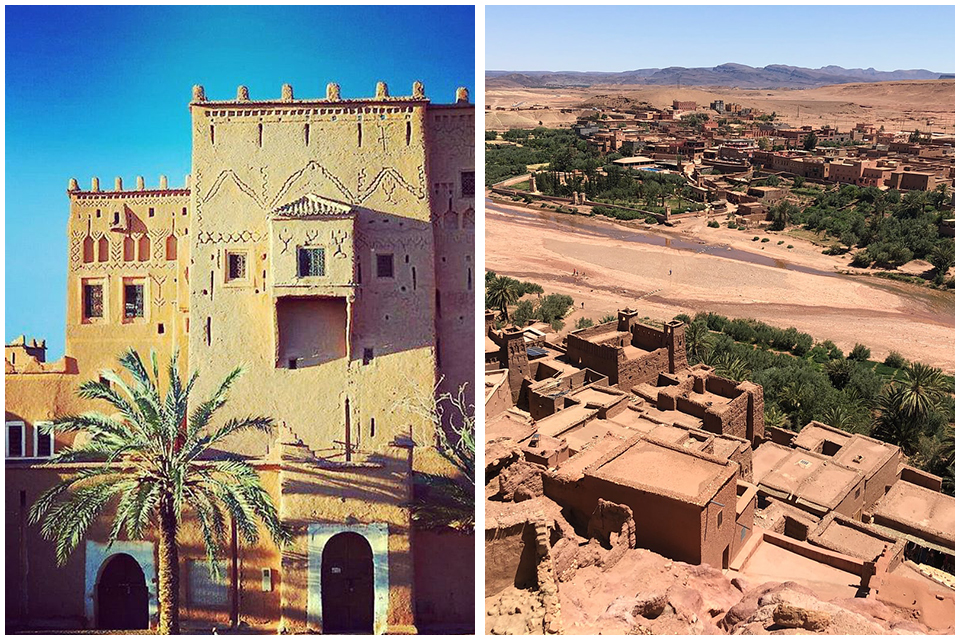 The film studios have given it its nickname The Hollywood of Morocco or Holly-Ouarzazate. It is a caramel-coloured oasis enhanced by the cloudless blue of the North African sky with its innumerable adobe Kasbahs, arid mountains and plains, lush green valleys and oases, palm groves and villages of red or ochre earth that make up the charm of this region and give it its tourist appeal. The symbol of the city is the Kasbah of Taourirt which belonged to the Glaoui and was built around the middle of the 18th century. It is represented in the new 50-dirham notes and is adjacent to the medina. This Moroccan city located at the meeting point of the valleys of the Ouarzazate river and the Dades river (from the High Atlas) which form the Draa river downstream of their confluence is the nerve centre of a vast region of southern Morocco. Ideal for holidays in an idyllic setting.