The 11 Wonders Of Fez Morocco

The imperial city is the capital of Morocco's traditional culture. A cradle of knowledge, its superb madrassas are its flamboyant symbol.
This fortified city, listed as a UNESCO World Heritage Site, will take you back to the Middle Ages. Located inside the medina, the entrance to the Bab Bou-Jeloud district is through its huge 1913 gate, decorated with blue and green tiles, the colours of the city.
Inside this district, visitors can visit the Bar Batah Museum, which brings together the Arts and Traditions of the city.
The latter is in the palace of the same name, erected during the 19th century.
The Bou Inania Koranic school’s architecture is full of various ornamentations.
Built in the middle of the 14th century, this madrassa is part of the process of dynamisation of the city initiated by the Merinid dynasty.
Tourists can also stroll along Talaa Kebira Avenue, one of the longest in the city, dotted with shopping boutiques. 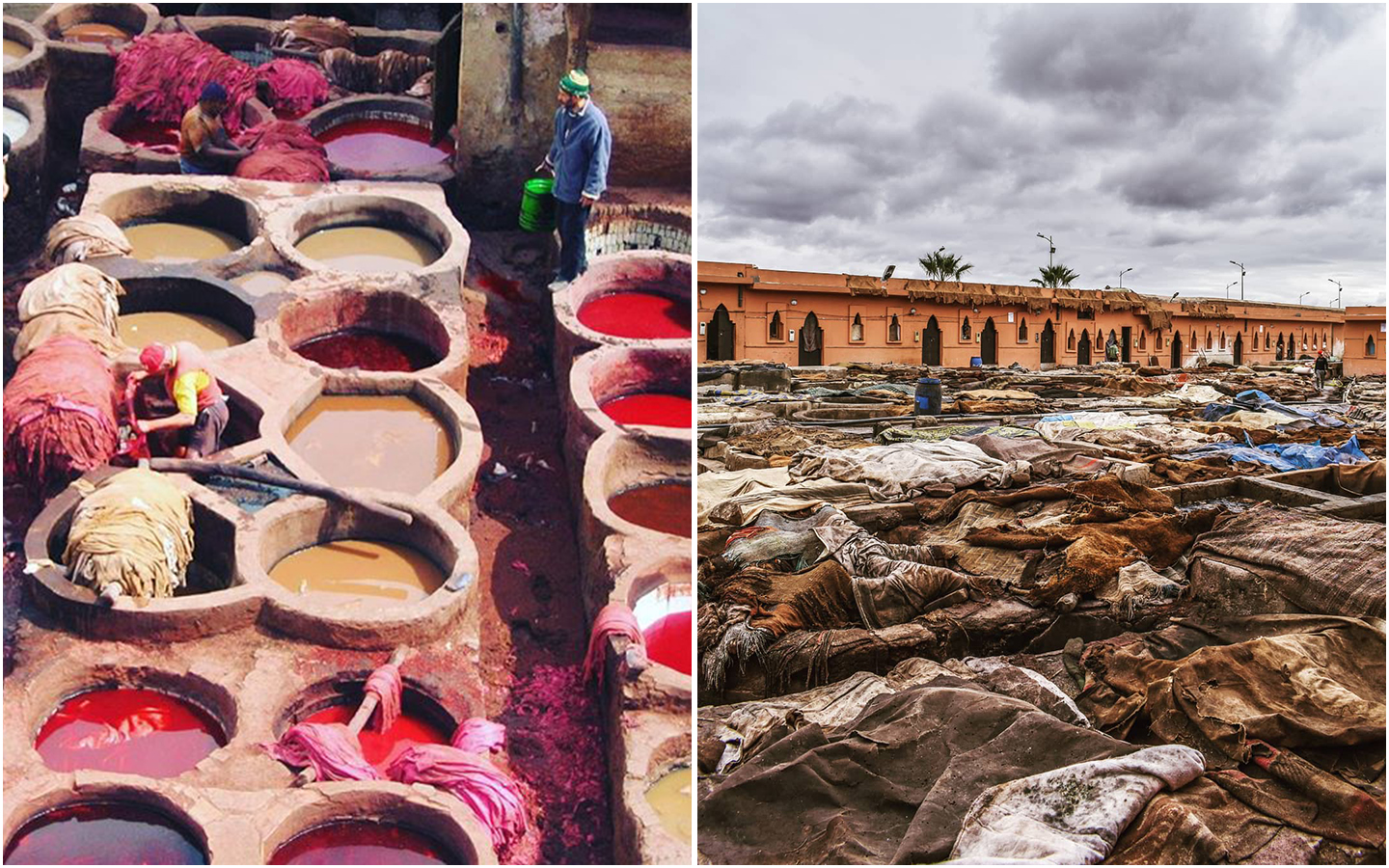 True spiritual and cultural heart of Morocco, the city of Fez is also synonymous with leather. To reach the souk of the tanners, the Chouara district, you have to take the Mechatine street which will take you a little bit away from the center of the Medina, This district with its very strong smells has been placed a little bit away from the most frequented districts.
The tanneries of Fez, like those of Marrakech, have not changed since the medieval times of Morocco. When you enter this district, you will immediately be immersed in the heart of the craft industry, discovering skins carried on donkeys to dry in the sun as well as a series of basins where the colour is more than ever present.
In the tanners' quarter, most leather goods manufacturers have a terrace where they can observe the dried earth brick and tiled wells where the tanning and hanging of the hides is carried out: a spectacle of sunny colours before your eyes.
The smells are certainly much less pleasant but a visit to these tanneries is nevertheless a very interesting experience that will allow you to discover the process of manufacturing babouches, bags, wallets and other picturesque souvenirs of Morocco, made thanks to the centuries-old know-how of these craftsmen. 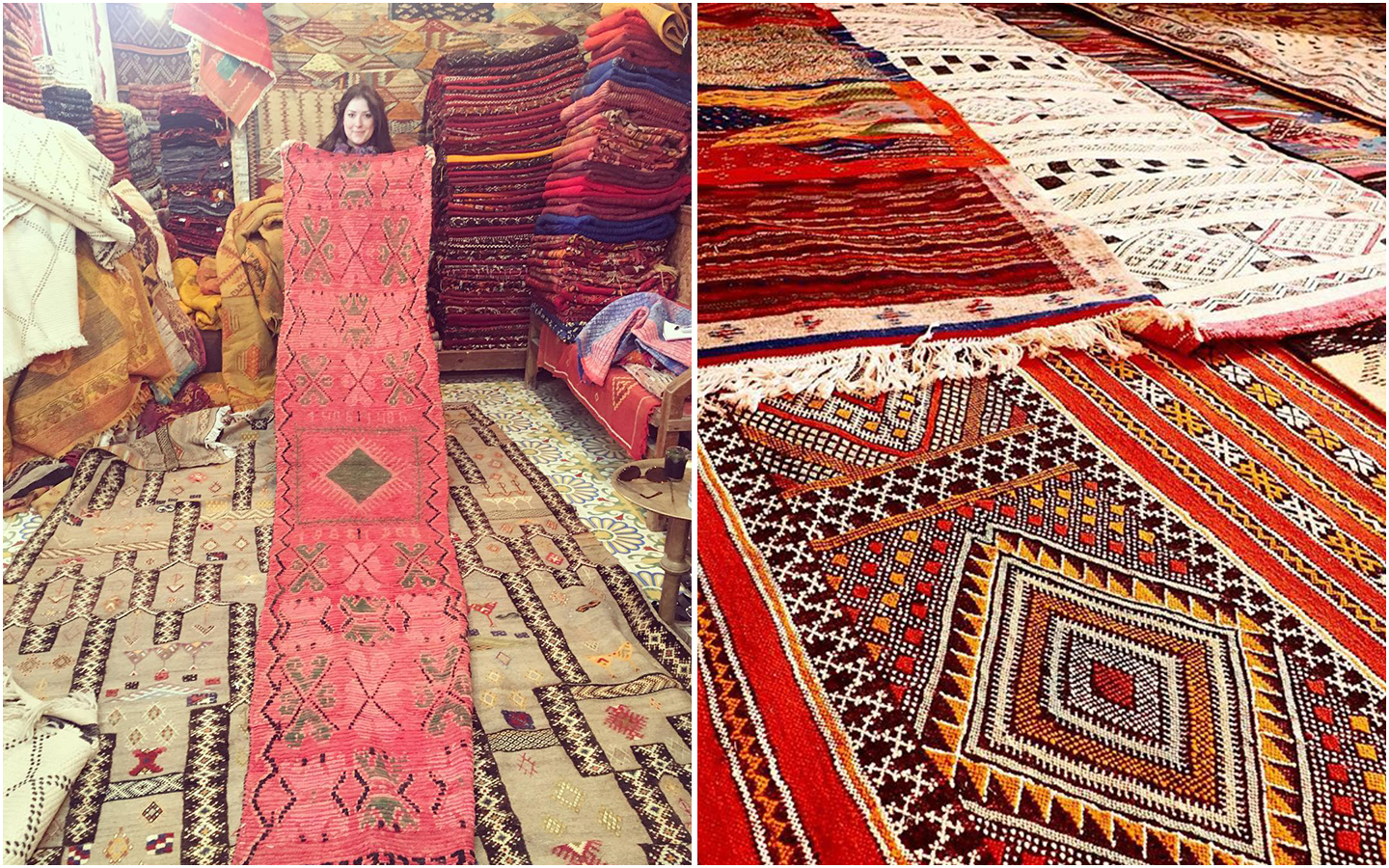 Browse the exquisite antiques and feel the antique carpets under your feet at Coin Berbère, a small group of shops specializing in Berber carpets and antiques from all over Morocco.
Belonging to two brothers, these old traditional shops are full of wooden chests, embroidery, 17th century wooden doors and 18th century carved portals.
Cobalt-blue Fez earthenware, brass pieces and jewellery are displayed in this cabinet of authentic curiosities with old silk caftans and perfumes from bygone eras. 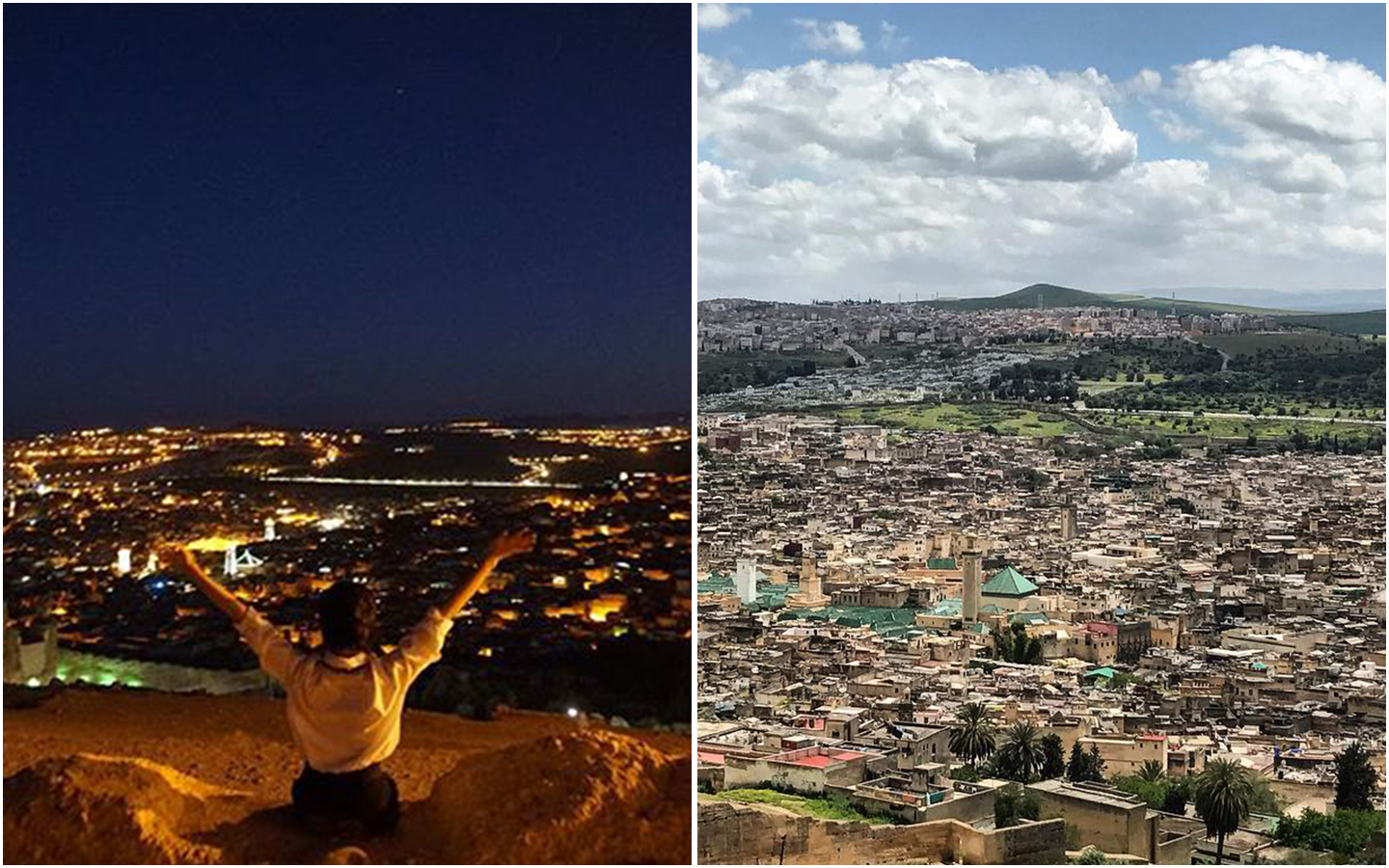 The North Borj was a Saadian fort built in 1582 during the reign of Sultan Ahmed Al Mansour north of Fez Al Bali.
Inspired by the architecture of the Portuguese fortresses of the 16th century, it was one of the largest surveillance posts in the city.
Nowadays, the North Borj is home to the Weapons Museum. The weapons on display date from prehistoric times to the present day and are presented chronologically, from cut stone to cannon, and are weapons of all nationalities.
The visitor will see, among others, axes, halberds, spears, spears, swords, swords, Iranian helmets, saddles with their ornaments, as well as rifles, pistols, revolvers and cannons of all types. 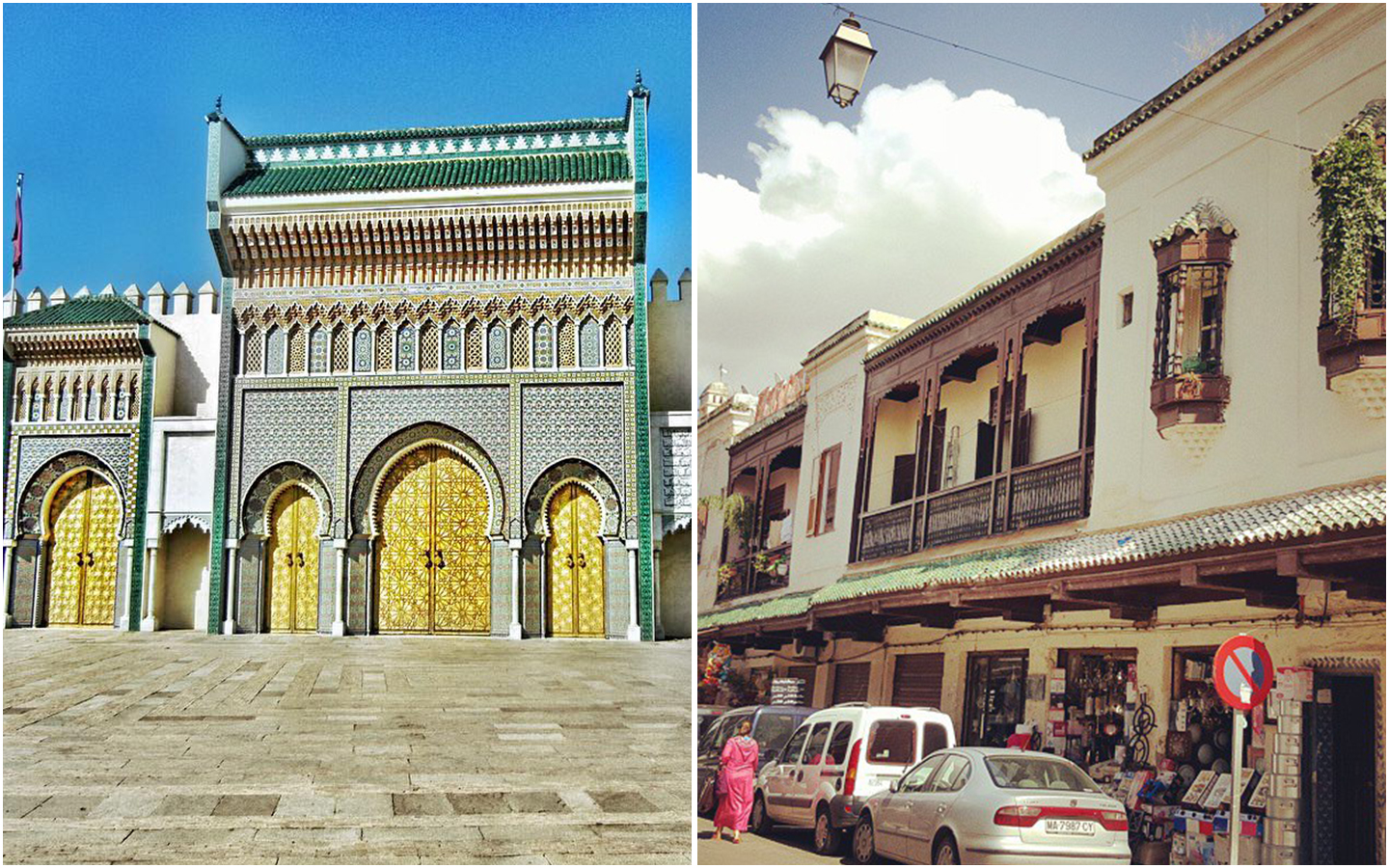 El Jdid is a city in its own right to the north of Fez el Bali, the ancient city. It was built in the 13th century by the Merinid dynasty who wanted to give the city a new dimension.
And what a dimension! The objective of the Merinids was to build a fortified administrative city with mosques, barracks, markets, dwellings and a royal palace to house the princes of the new dynasty.
The Dar el Makhzen or royal palace alone covers almost 80 hectares. 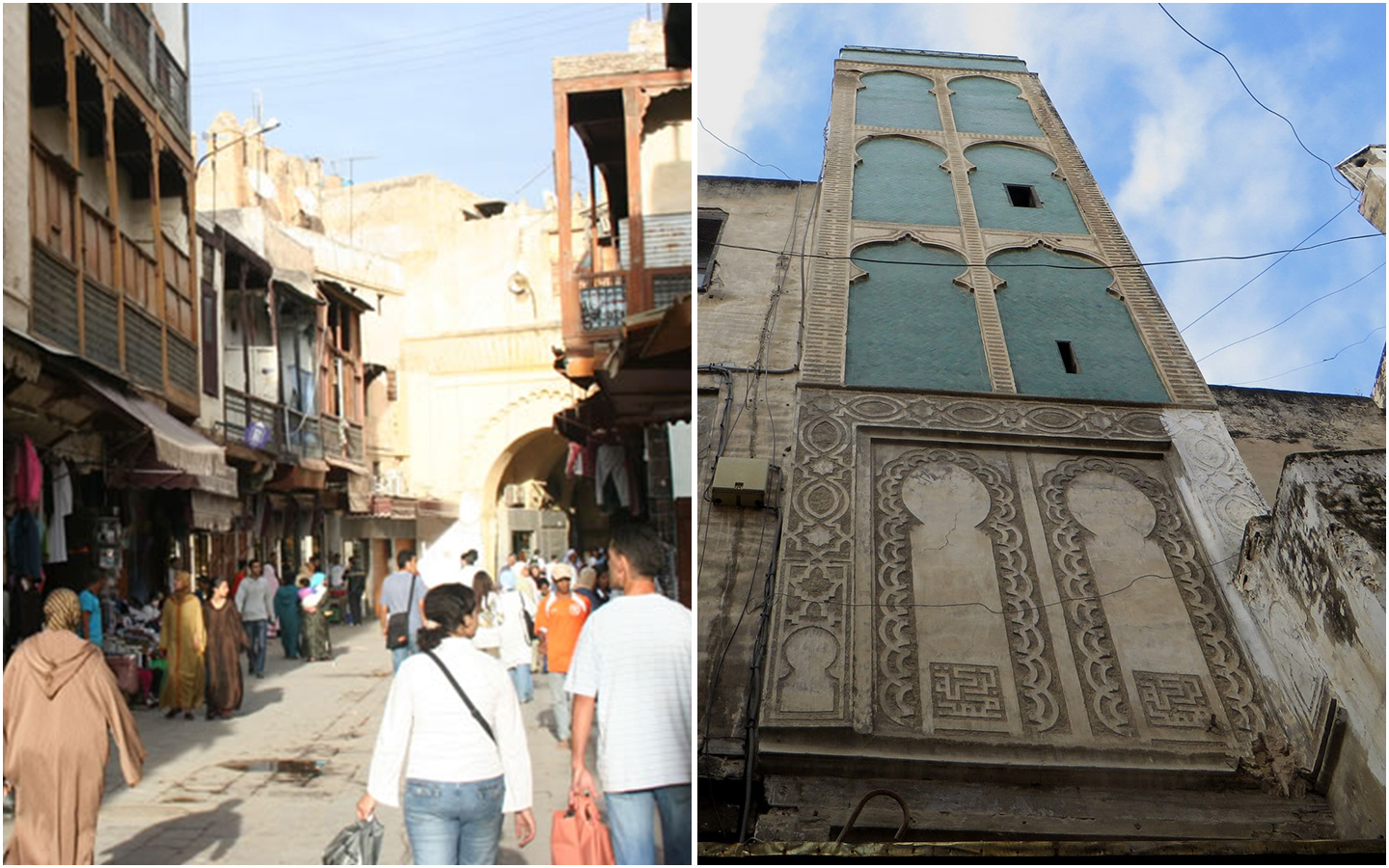 The Andalusian influence in Morocco began as early as the 9th century during the massive invasion of the Spanish population onto Moroccan territories.
Arriving in northern Morocco and especially in the city of Fez, the Andalusians gradually imposed their way of life and their societal organisation.
The Andalusian district of Fez was born. It is made up of about 1000 Andalusian families who had fled the south of Spain.
Today, it is possible to observe the culture shock around two sites that cannot be ignored - the Es-Sahrij madrassa, the Muslim theological university, and the Mosque of the Andalusians, a monument whose embellishment has continued to grow. 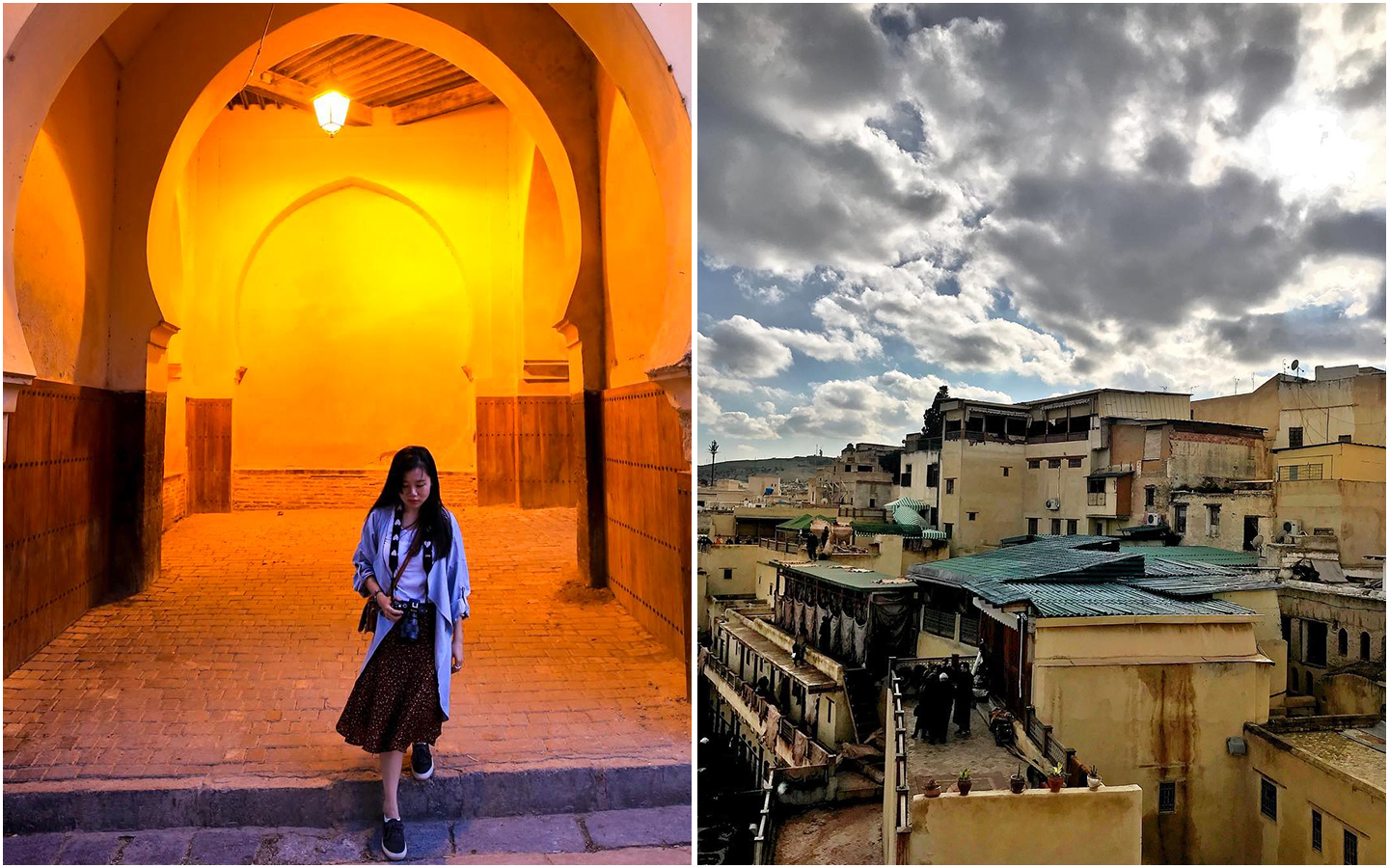 Fez el Bali is also the oldest neighborhood. Classified as a UNESCO World Heritage Site, Fez el Bali is full of monuments and historic sites scattered throughout the 9,500 narrow streets of the medina.
Surrounded by ramparts, the medina is a large medieval city that has hardly changed in 1000 years. Still inhabited, the medina is the liveliest place in the city.
Thousands of Fassis, inhabitants of Fez, cross there every day with donkeys loaded with goods heading towards the souks. A bewitching place worthy of a thousand and one nights ! 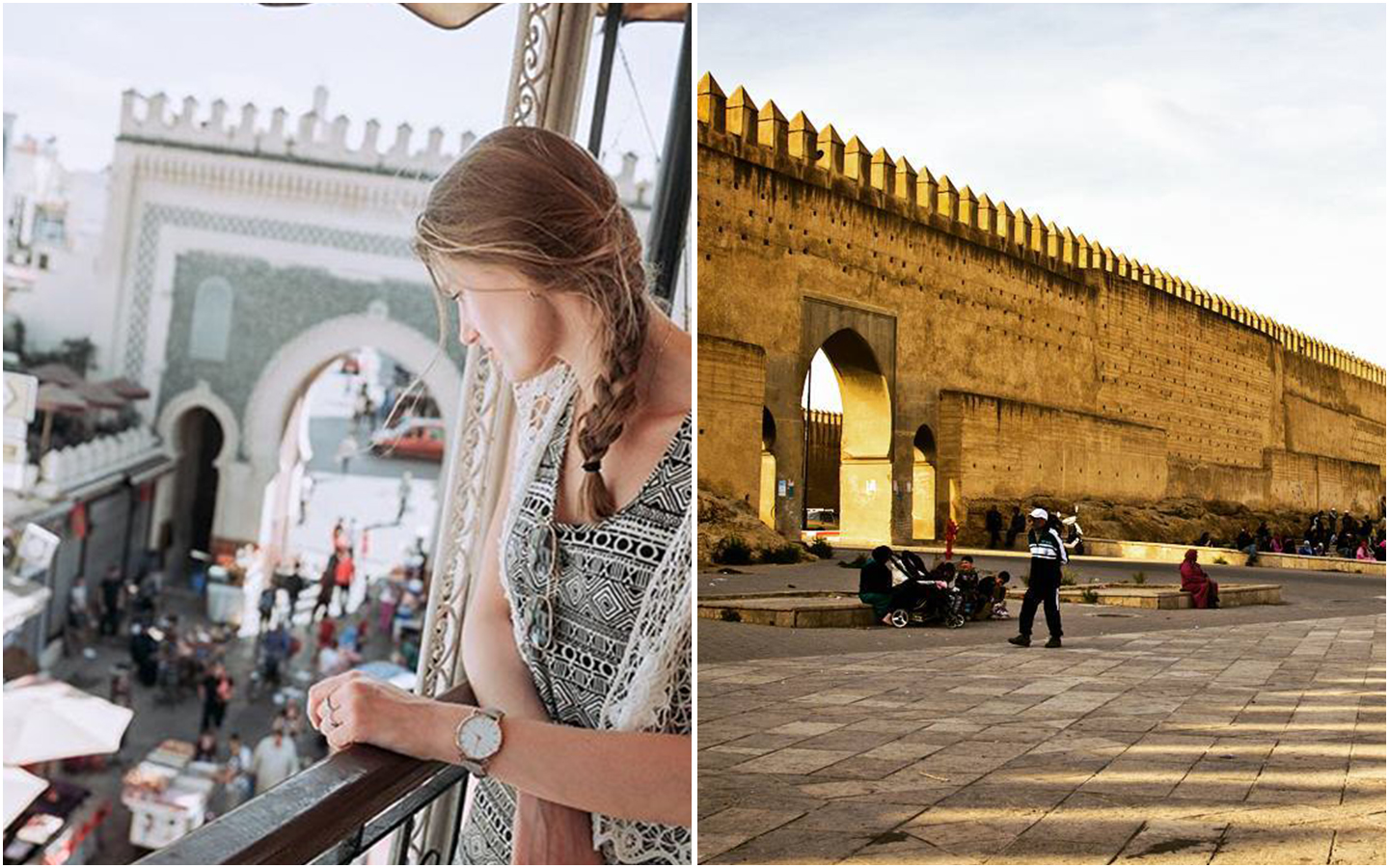 Located inside the medina, the entrance to the Bab Bou-Jeloud district is through its huge 1913 gate, decorated with blue and green tiles, the colours of the city.

Inside this district, visitors can visit the Bar Batah Museum, which brings together the Arts and Traditions of the city. The latter is in the palace of the same name, erected during the 19th century.

The Bou Inania Koranic school has an architecture full of various ornamentations. Built in the middle of the 14th century, this madrassa is part of the process of dynamisation of the city set up by the Merinid dynasty.

Tourists can also stroll along Talaa Kebira Avenue, one of the longest in the city, dotted with shopping boutiques. 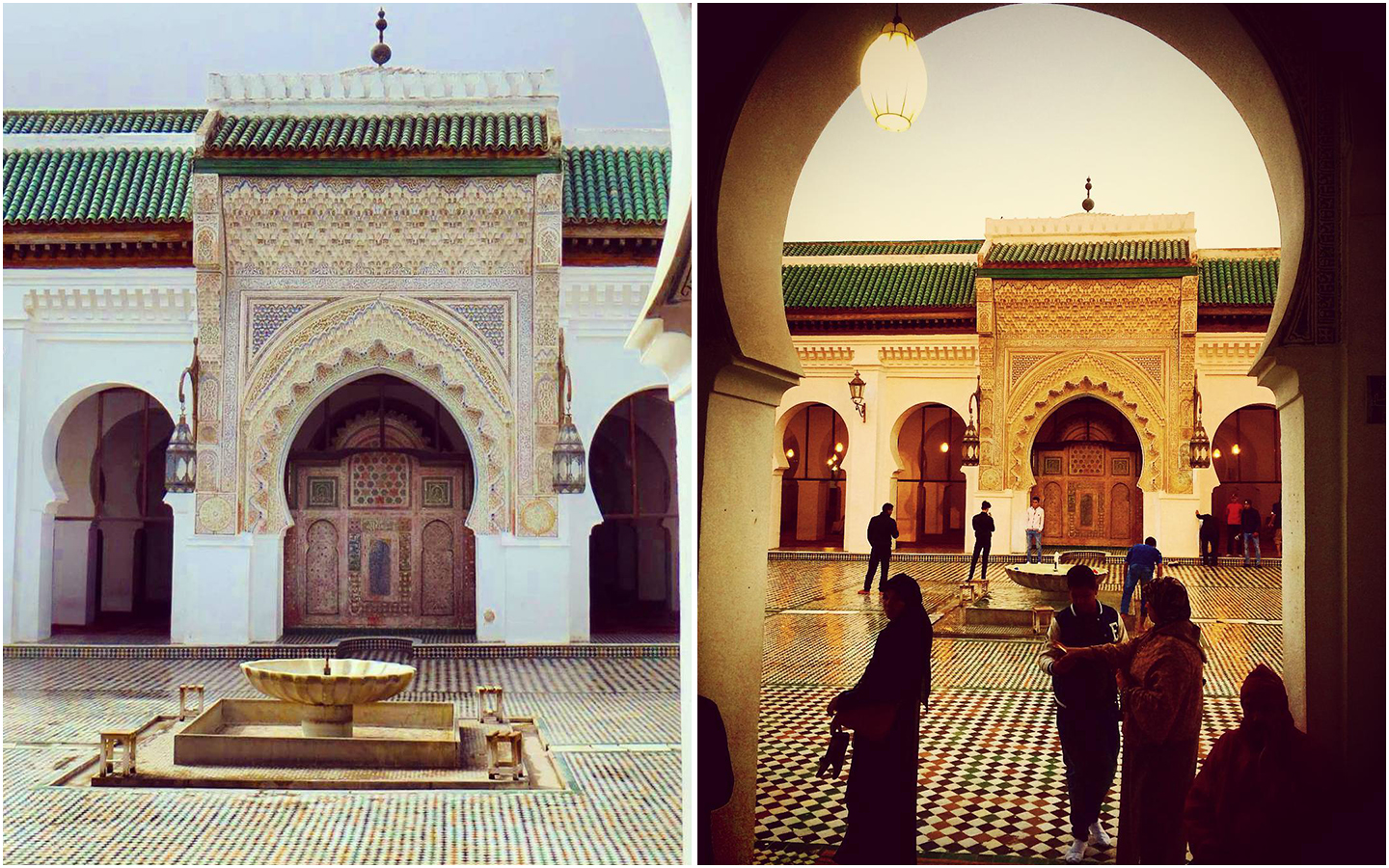 The Karaouine Mosque, one of the oldest and most illustrious in the Muslim world, was the first university in Morocco to have been attended by famous scholars such as Ibn Khaldoun, Ibn Al Khatib, Averroes.
Still considered one of the main spiritual and intellectual centres of Islam, it takes its name from the neighbourhood in which it was built, that of the Kairouanese refugees.
It houses the headquarters of the Muslim University of Fez. Built in several stages, the Karaouine Mosque was first founded in 859 by Fatima El Bint Mohamed Ben Abdellah el-Fihri, a pious woman from Kairouan.
This sanctuary, transformed into a mosque in 933, originally consisted of a prayer hall, four naves parallel to the Qibla wall, and a wide courtyard whose north wall housed the Minaret.
It was enlarged under the Zenets in 956. Some annexes (library, detention rooms, ablution rooms) were annexed to the building during the reign of the Almohads, Merinids, Saadians and Alaouites. It has a capacity of 20,000 people. 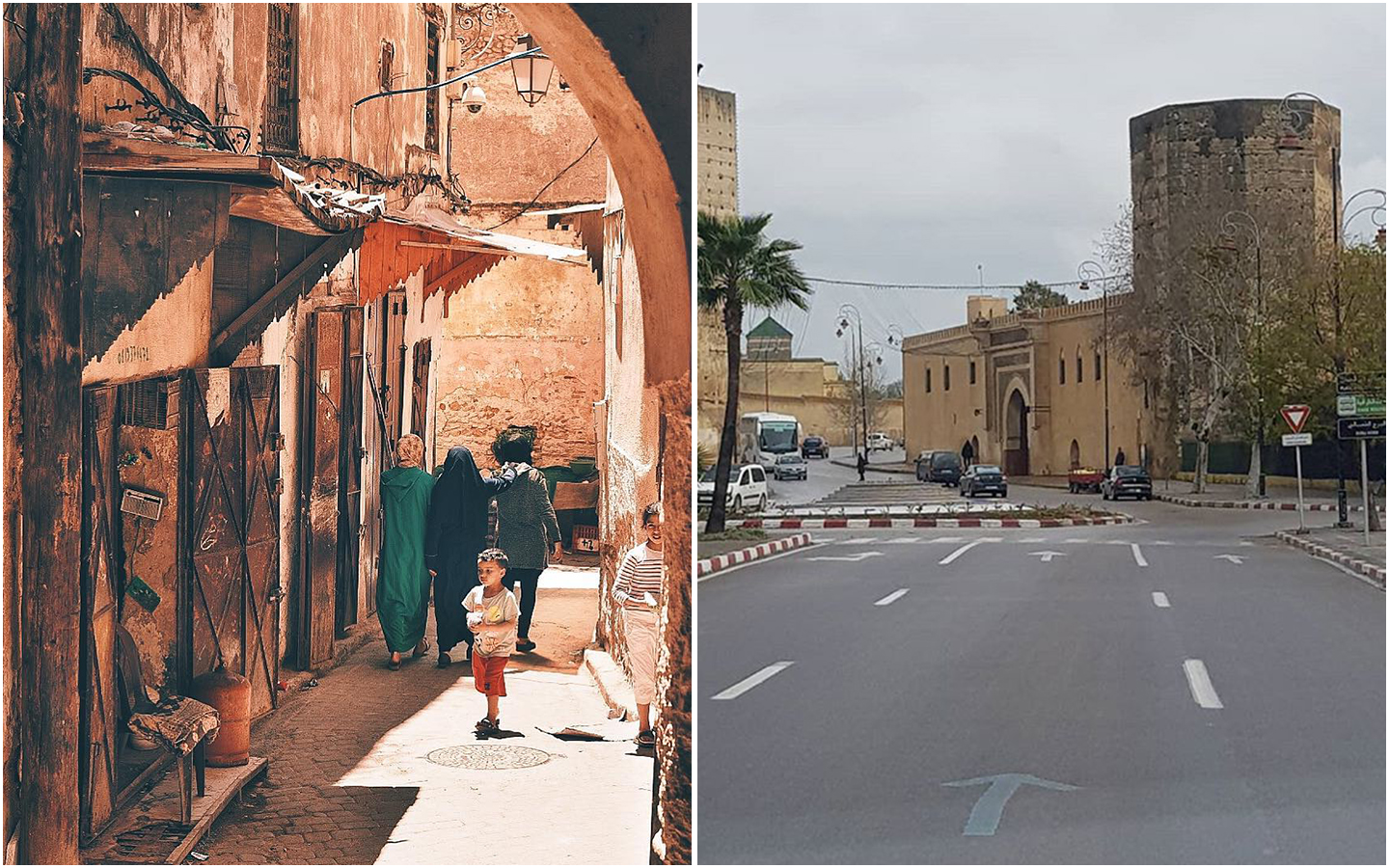 When visitors arrive in Fez, their eyes will immediately turn to the various gates that make up the city walls. First of all, in the south, the Borj-sud, meaning the southern fort, offers a magnificent panorama of the whole city once you reach its terrace.
Then, close to the Msallah mosque, visitors will be able to explore the potters' district called Ain-Nokbi, a space where one can discover their craft skills.
Still touring the city, visitors will linger in the Merenid tombs, containing the bodies of the rulers of this dynasty.
Finally, to complete the walk, tourists can visit the Weapons Museum, located north of the fortifications of Fez, which exhibits swords, sabres and firearms from medieval times.
A long walk along the city walls to reveals its architecture, traditions and the vestiges of its history. 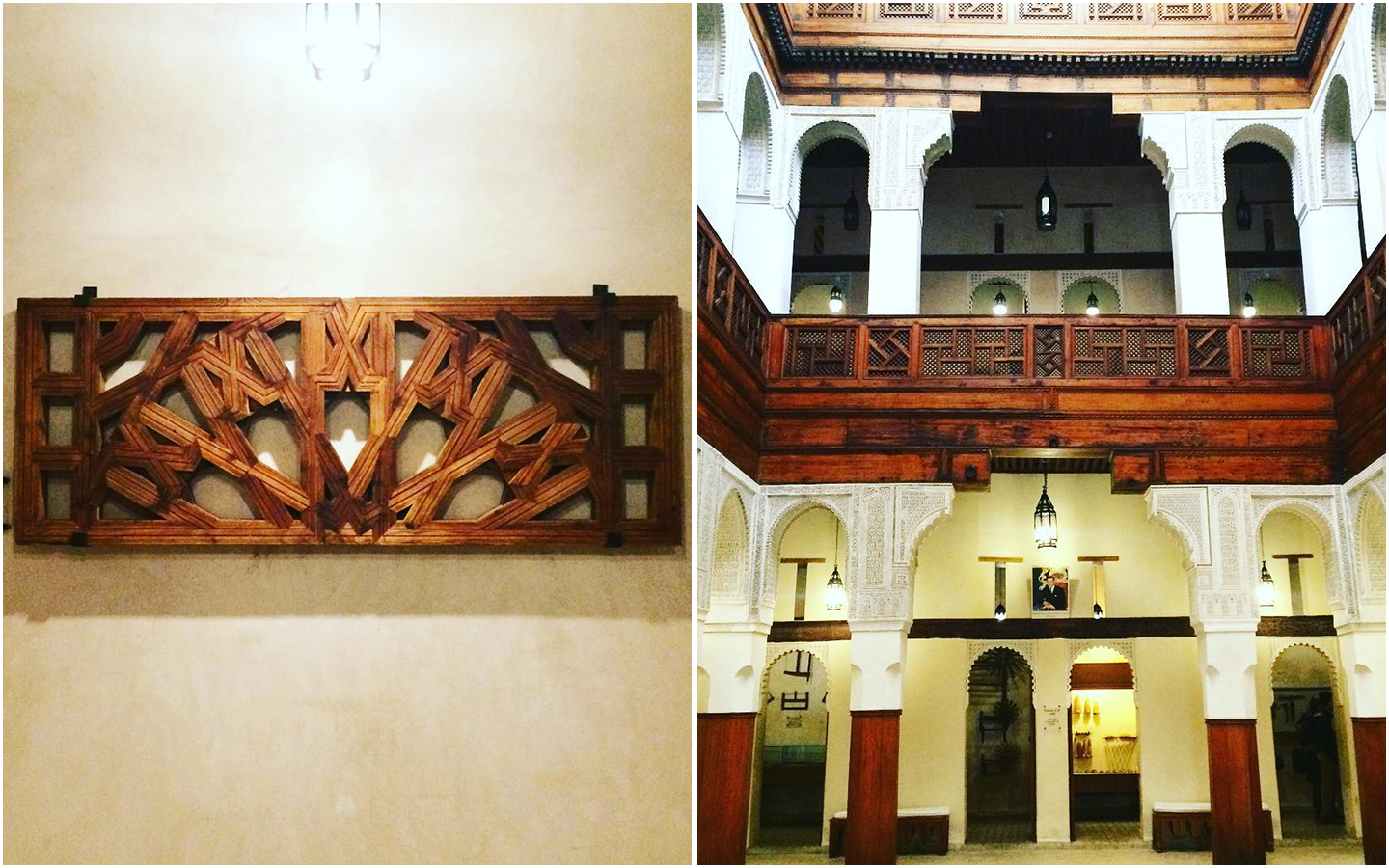 This is located in Fez, in the Medina. As indicated on the site of the Moroccan Ministry of Culture, these are 18th century buildings overlooking the square of the same name.
Their architecture bears witness to the new trends that marked the art of building and monumental decoration in Fez at the beginning of the Alaouite period.
The Nejjarine district is famous for its woodwork. Located along the main axes of the medina and near the main gates, the fondouks were once used as a place of trade.
In 1997, a museum of woodworking arts and crafts was created on the initiative of Karim Lamranid within the walls of the beautifully restored Fondouk Nejjarine.
Today, the Nejjarine Museum is the first private museum specialising in the arts and crafts of wood in Morocco. From the top of its terrace there is a beautiful view over Fez and the surrounding hills. 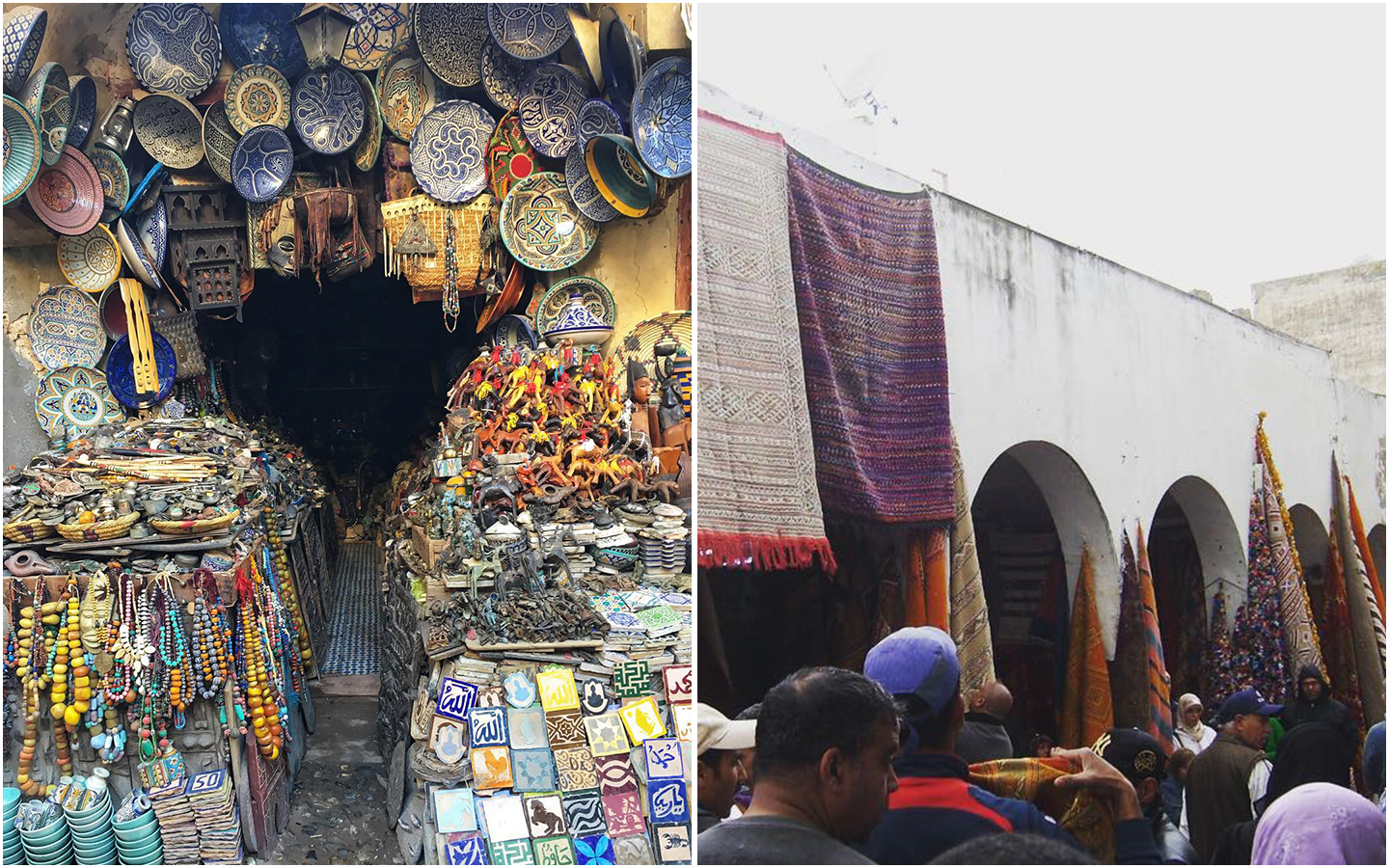 This is one of the oldest in the medina. Historically it was linked to the Maristain (hospital specializing in the care of the mentally ill).
For centuries henna has been sold there, but also other traditional cosmetic and pharmaceutical products such as rassoul, black soap, kohl, rose water. More recent shops have also specialized in the sale of handmade pottery.