A Selection Of Tourist Sites In Meknes 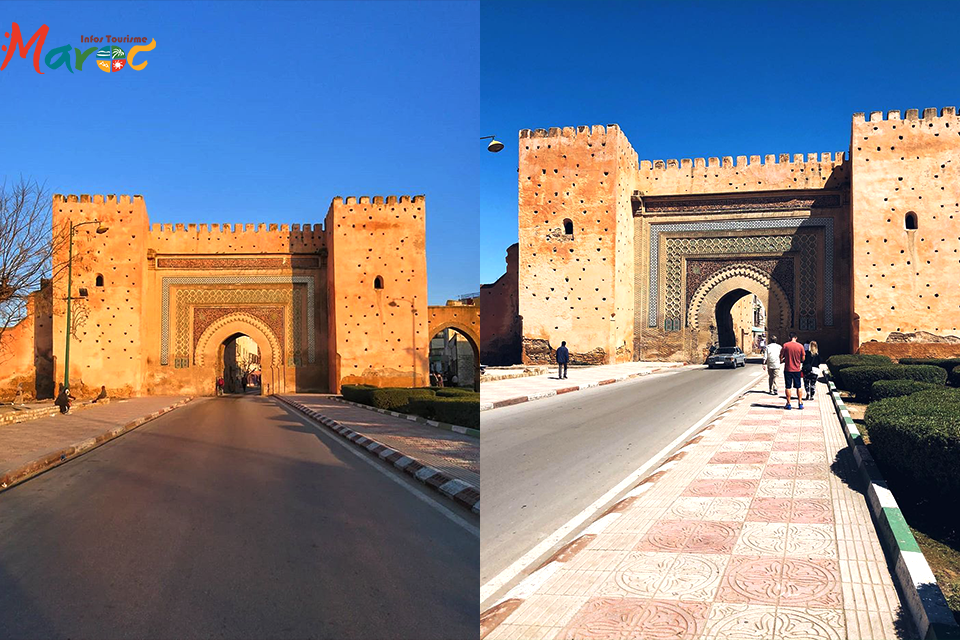 Bab El-Khemis is an imposing gate that was once the western entrance to the city of the Garden of Amber (Madinat Ar Riad Al Anbari) built in the 17th century by order of Moulay Ismail. It was at the time a beautiful city, but unfortunately was destroyed less than a century later by Moulay Abdellah, a successor of Moulay Ismail.
Today, it is home to a kind of flea market where you can find anything and everything: Beautiful wooden doors, 15-year-old computers, intricate vintage lamps or refrigerators.
Bab El Khemis is astonishing because of the abundance, diversity and low prices of the products found there. Wholesalers, craftsmen, antique dealers are here. Some exhibit their wares in their respective shops, others simply occupy any free place as simple street vendors, creating a special atmosphere that makes this public square one of the liveliest popular districts of Meknes. 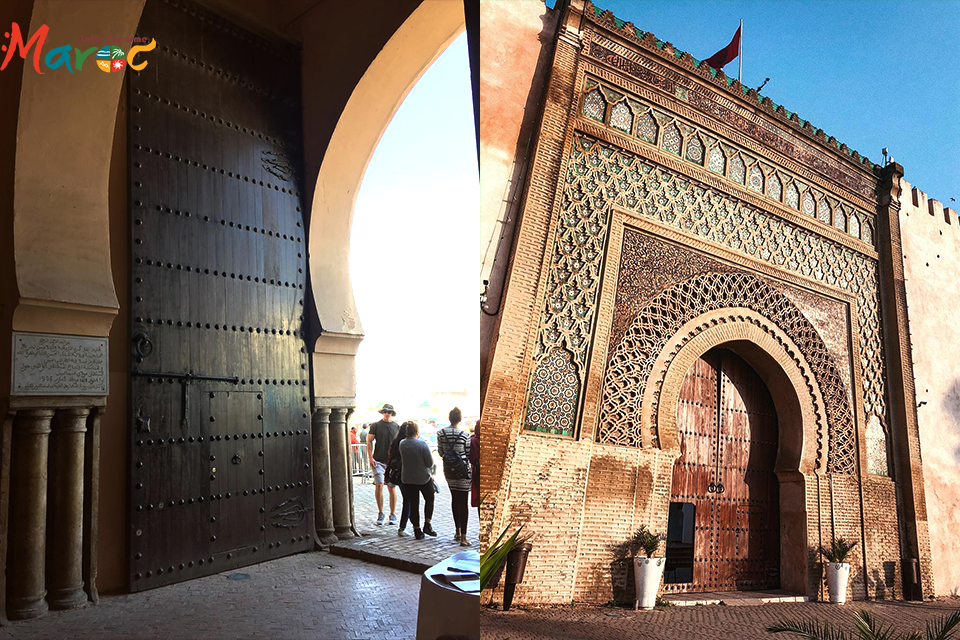 Bab Mansour is the gate (Bab means door) giving access to the medina. It is one of the most beautiful gates in the world and the most important in North Africa. It is on the Place El-Hedime.
Bab Mansour is famous all over the world. It bears the name of Mansour el Aleuj, 'Mansour the renegade', a Christian convert who was its architect during the reign of Moulay Ismael. It was completed in 1732.
The Bab El Mansour room now houses an art gallery. 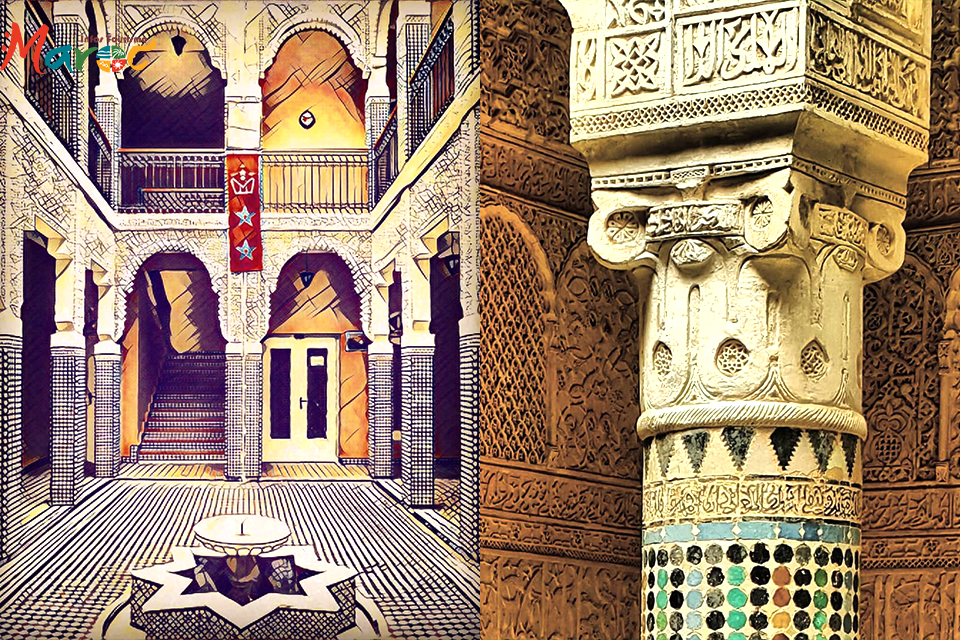 This is one of the oldest theological schools in the kingdom. The Bou Inania Madrassa of Meknes, built under the Merinid dynasty in the 14th century, is a true architectural jewel.
Built in the middle of the Meknes medina, the school bears the name of the man who commissioned its construction, Sultan Abu Inan Faris (1348-1358).
The Bou-Inania madrassa is real traditional architecture. The imam's place was dug into the wall. Open every day except public holidays from 9am to 12pm and from 3pm to 6.30pm. 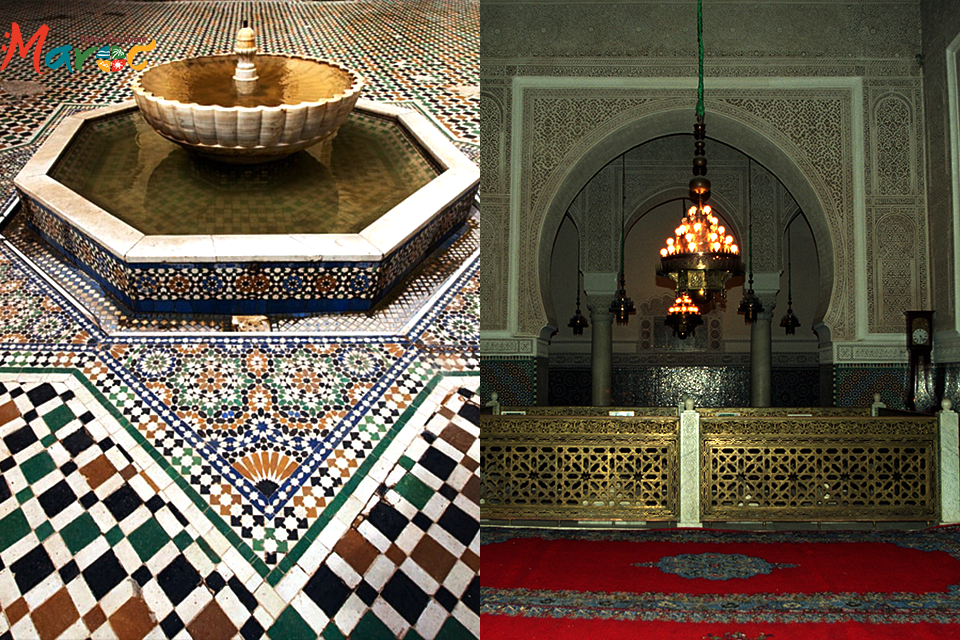 The mausoleum of Moulay Ismail was built in 1703. Access to the mausoleum is through a very elaborate door, decorated with interlacing and surmounted by a canopy of green tiles. This door is moreover mounted like a screen in front of the first Qoubba. A series of rooms and a courtyard with ablution facilities precede the sanctuary.
There is then an almost square room of 9.88m by 10m, the walls of which are lined with zellig to a height of 1.60m and a strip of carved plaster.
In the centre is a round marble basin and then stairs leading to the first courtyard which gives access to the cemetery reserved for the Alaouite family. Five staircases lead up to the third courtyard where there is a round basin and a mihrab. Twelve columns support its inner dome.
At the back of the room there is a poem by Mohammed V in memory of Moulay Ismail alongside a family tree of the Alaouite dynasty. This monument gives an impression of calm and serenity that blends very well with the image given by Meknes. 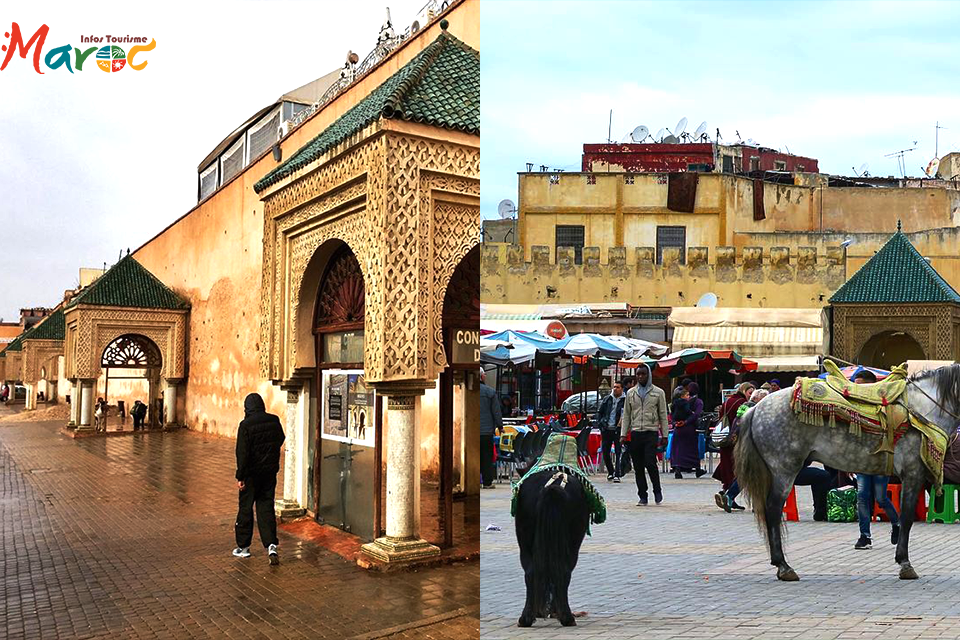 Bab El Hedim square is located in the centre of the ancient city. It stands between the medina, the mellah and the imperial city. The square is rectangular.
Before Moulay Ismail came to the city, a Kasbah was located here, but once the Bab (gate) was erected, the king ordered the Kasbah’s demolition and created a large square from which one could better admire the gate.
Originally used for royal announcements and public executions, it is a good place to sit and watch the world go by. 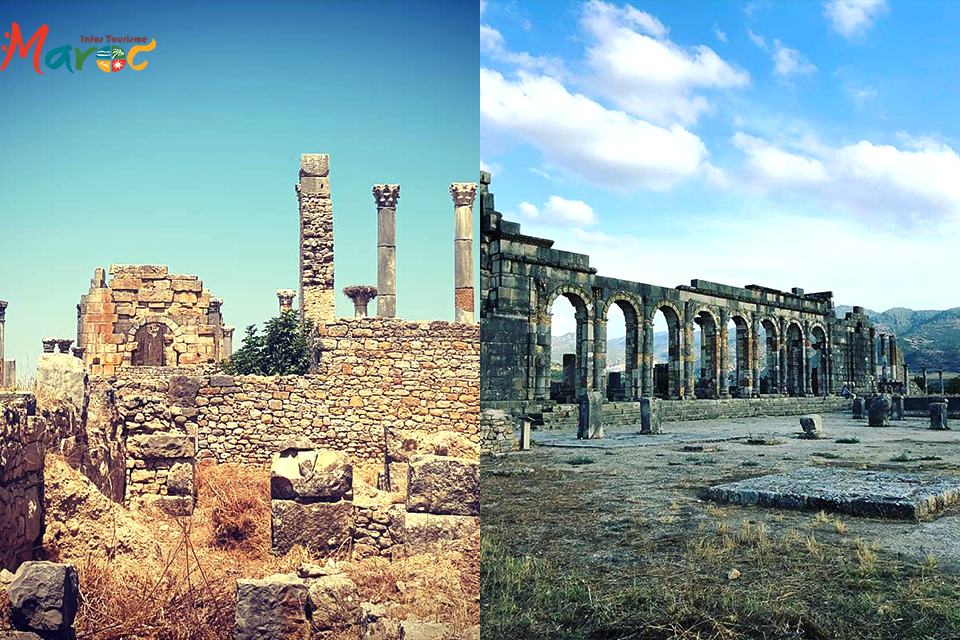 Volubilis is an ancient city of Morocco. The ruins of Volubilis are located about 30 km northwest of Meknes, Morocco.

These remains have been spared from contemporary urban development and have been excavated since the 1920s.