Places To Discover In Tangiers

Located on the Strait of Gibraltar that separates Africa from Europe, about 15 km from the Spanish coast, and on the edge of the Rif mountain range, it offers an exceptional view of the other side.
Tangiers has long been an important strategic location. With its two thousand five hundred years of existence, it has a population of 974,000 today and is one of the oldest cities in North Africa.
Its medina, Kasbah, bazaars and souks are among the most lively in the country, and its beaches are superb, about 7km long.
In the last century, Tangiers became one of the favourite places for the international jet set. An important seaside resort, Tangiers has varied hotel and tourist infrastructure, and a medina that attracts huge numbers of visitors.
At the entrance of the Medina, the Grand Socco is the most frequented place of the city. The square is bordered by the former residence of the Mendoub (representative of the Sultan) and its park.
The Mendoubia Park is a splendour with its giant banyan fig tree and its many 100-year old dragon trees. You can also see the Kasbah Museum, Cinematheque of Tangiers and the Caves of Hercules.
Tangiers has long been a land of welcome for many artists and intellectuals.
The second Moroccan economic centre after Casablanca, Tangiers's industrial activity is diversified: textile, chemical, mechanical, metallurgical and naval industries.
The infrastructure of the city of the Strait is important: a port managing the flow of goods and passengers (more than one million passengers per year) integrating a marina and a fishing port. 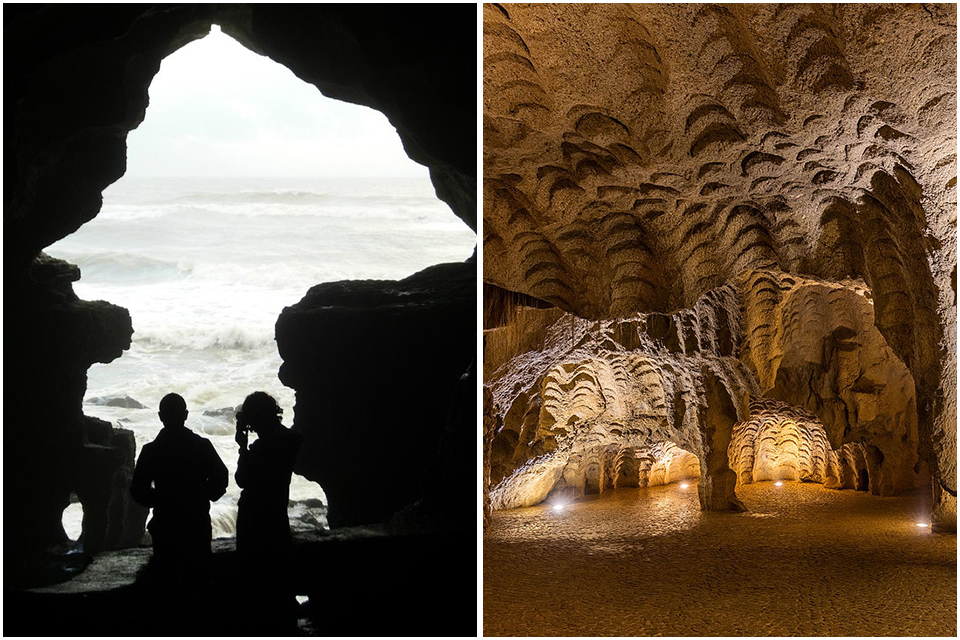 Legend has it that Hercules came to rest in this cave in Tangiers. It's a cave with a narrow entrance, dark inside and humid, where the light has only one passage: a magnificent slit overlooking the ocean. Whether myth or reality this is another story.
If you are passing through Tangiers take the time to go there to walk in the footsteps of Hercules and to venture inside this cave, hostile at first sight, but simply magnificent once inside.
The Cave is located under a large rock that now houses cafes and restaurants. It has jealously preserved the traces of Hercules: his footprints, his footprints, his bowl and all the traces of his passage.
Once inside the cave, nothing is better than a photograph in front of the opening overlooking the ocean to immortalise the moment, it has to be said that it is not every day that we follow in the footsteps of Hercules.
If you come here, it is mainly out of curiosity whether or not you believe in what the legend says. A visit to the cave of Hercules is really worth the detour.
Handicraft shops at the exit of the cave offer you many souvenir items, just to take a piece of the legend with you. Who knows? Maybe Hercules will bring you luck. 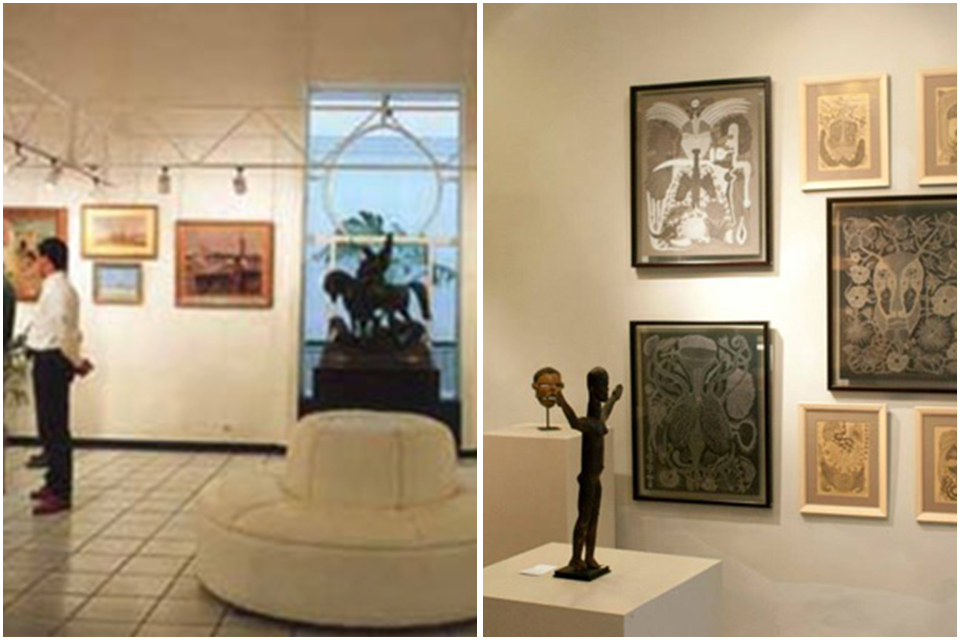 The Museum of Contemporary Art in Tangiers is the first of its kind in Morocco. Installed in a villa from the beginning of the 20th century, its mission is to preserve and disseminate contemporary Moroccan art. 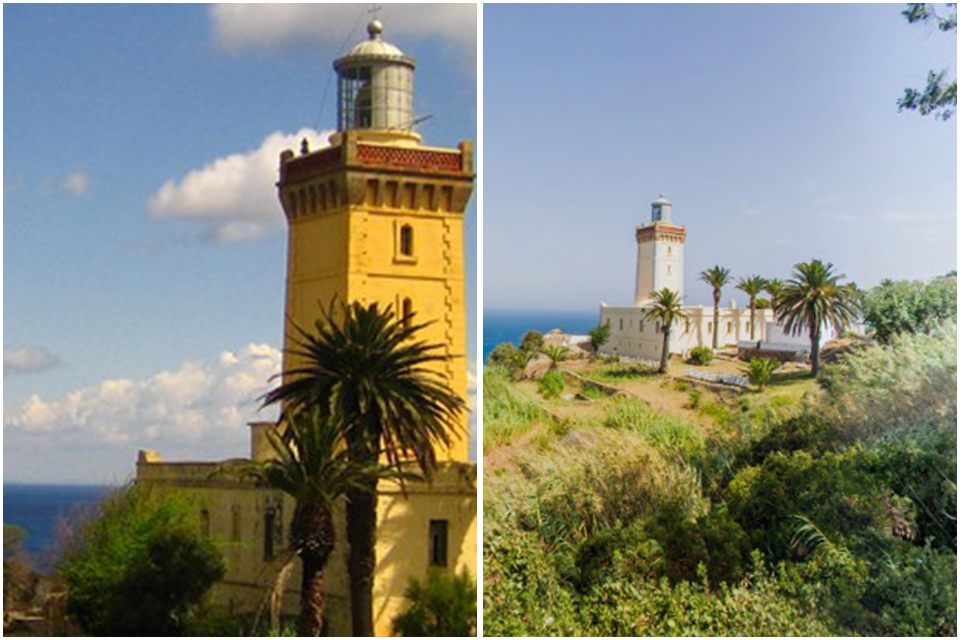 Cape Spartel is a place that charms and attracts all those who love beautiful views. Lovers come here to find tranquillity and romance, photographers find beautiful landscapes to immortalise, romantics find magnificent views to contemplate.
Cap Spartel also called Ras Spartel is located 14 kilometres west of Tangiers on the same road that leads to the Caves of Hercules.
This mythical place is home to a lighthouse dating back to October 15, 1864, which gives a plus to this area which already has its own charm.
This is where the Mediterranean and the Atlantic meet, you will not find a site like this anywhere else. This place is simply unique in the world.
As you enter the town you will see many parked cars, groups of young people and many families settled on the shore.
A festive atmosphere reigns here in summer and winter. The lighthouse of Cape Spartel is still active, but is closed to the public, no doubt to preserve it. It can only be viewed from afar and its inaccessibility gives it a kind of mystery.
Sit in one of the cafes overlooking the Cape and sip a glass of mint tea, gaze at the magnificent view of the sea in the distance. 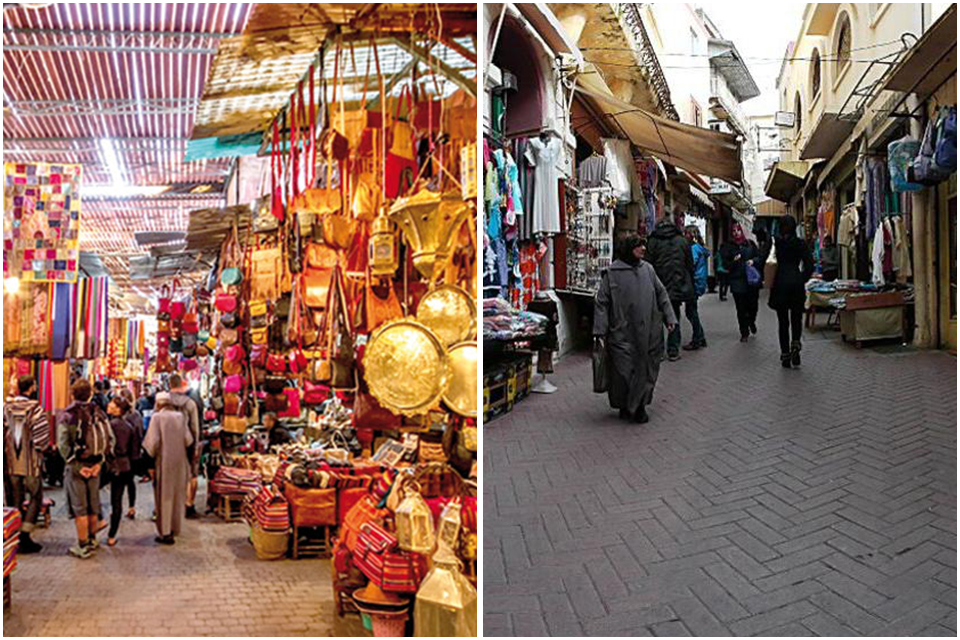 Tangiers the high, Tangiers the white, Tangiers the international, different appellations that have tried in vain to describe just part of the beauty and charm of this beautiful coastal city in northern Morocco.
Tangiers is full of places to visit, places to discover, cafes, restaurants, you will have all the ingredients to concoct a rich and varied stay.
He who says Morocco, says of course Medina, souk and crafts, Tangiers is no exception to this rule. Discover the souks of Tangiers and plunge into the authentic soul of the city.
Your visit will start at the Grand Socco, a vast square full of cafés, street vendors, women of the Rif with their multicoloured clothes and big hats, craftsmen's shops, in short a whole mix of smells and colours.
Cross the great arcade and you will find yourself in the heart of the medina of Tangiers. Once inside the medina, let yourself be guided by your footsteps.
The more you plunge into the heart of the souks, the narrower and more mysterious the alleys become. Continue your walk until you reach a small alley that climbs up a staircase called the alley of Sidi Hosni or the alley of the couturiers.
Here, don't forget to take a picture of the men winding threads of all colours. Then go up along Amrah to the door of the Kasbah, and there it will be a complete change of scenery.
Snake charmers, storytellers and musicians will make you live a moment worthy of the tale of a thousand and one nights.
And icing on the cake, by crossing the small door of the Kasbah (the door of Sidi Bouknadel), you will have in front of your eyes a beautiful panorama which stretches to Spain. 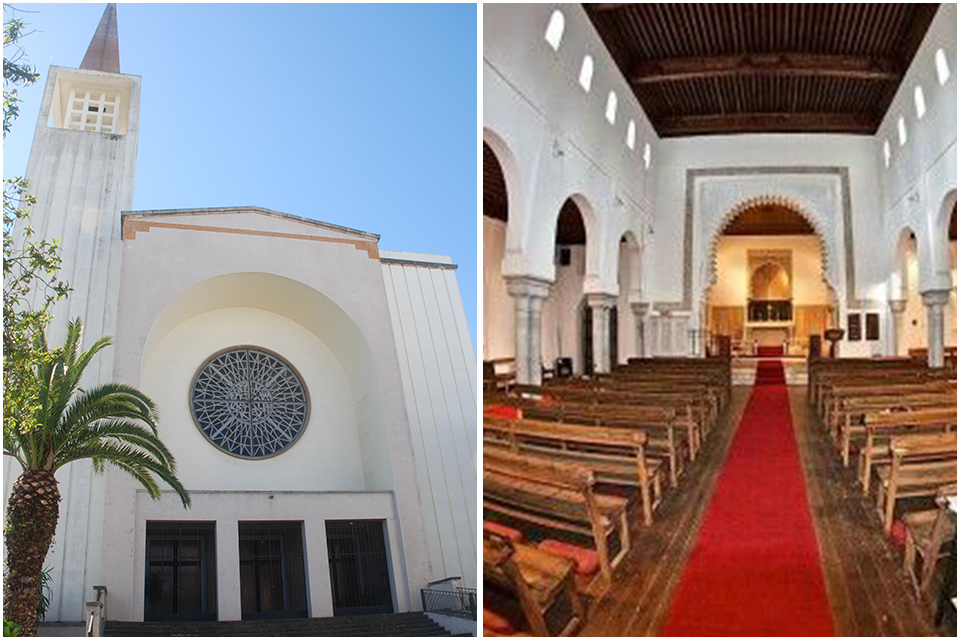 Saint Andrews Church is located in the heart of the old city of Tangiers. Visitors passing through would not expect to discover a 19th century Anglican church in the White City.

It was built in Moorish-Andalusian style.

A service is still celebrated in the presence of the Anglican faithful of the city or visitors to Tangiers.
A prayer in Arabic is engraved in one of the arcades above the church door. The Anglican cemetery of Tangiers and a lovely green garden adjoin Saint Andrews church. It is located on Rue d'Angleterre, above Grand Socco Square. 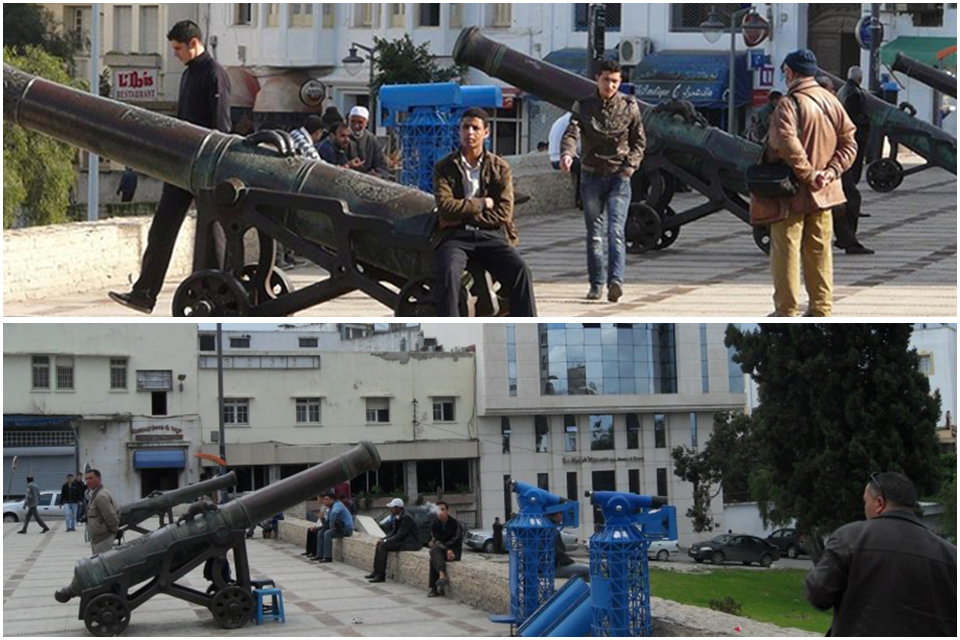 "Sour Al Magazine" is "the Terrace of the Lazy" and this small square offers a magnificent view over the strait and Spain. Numerous period cannons decorate this square bordered by a small low wall, on which, long ago, guys carrying merchandise used to take a quick break before reaching the souk. 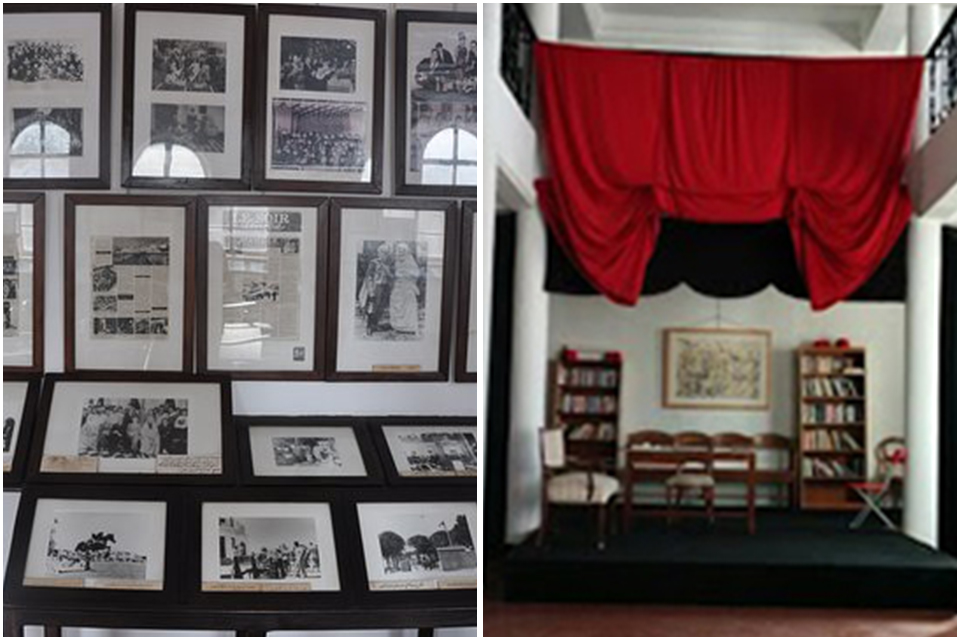 The Lorin Foundation Museum was inaugurated in one of the oldest synagogues in the city and presents various and varied collections, such as a collection of old photographs of Tangiers and paintings by young artists from the School of Arts.
The museum is located a few steps from the Place du 9 Avril 1947 and the Jardin de la Mendoubia, in the heart of the centre of the White City. 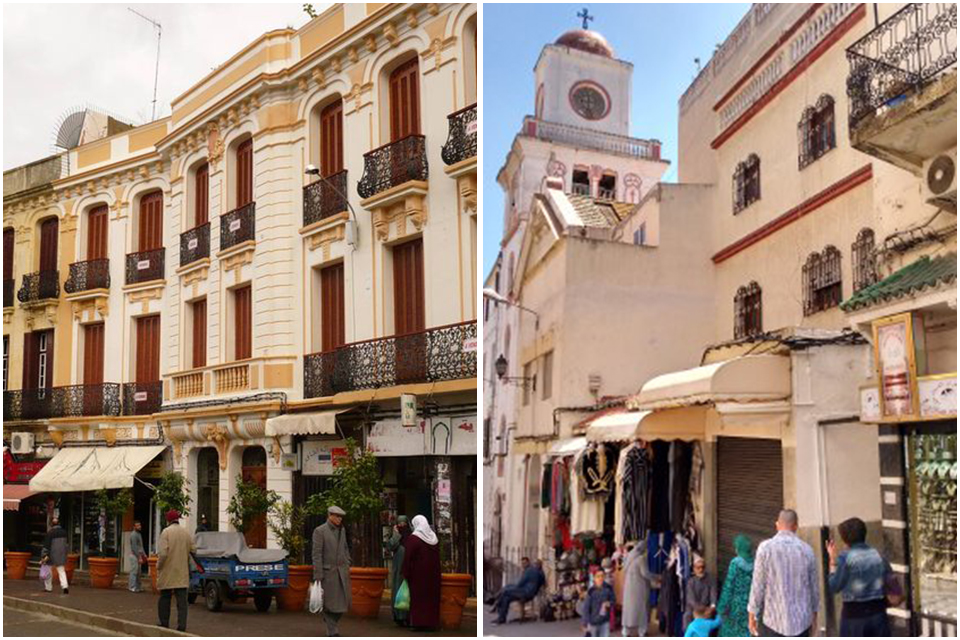 The Rue Siaghine in Tangiers is in the heart of the medina. It's one of the busiest arteries in the city. It was the street "des bijoutiers" then ""Catherine Street"" in homage to Catherine of Braganza who had offered the King of England the cities of Bombay and Tangiers.
It became the street "of the Jews", one of the highest concentration of Jews with one shop out of two becoming a bank or an import-export company.
A glorious past still present on the doorstep of the houses that have kept their names of yesteryear. 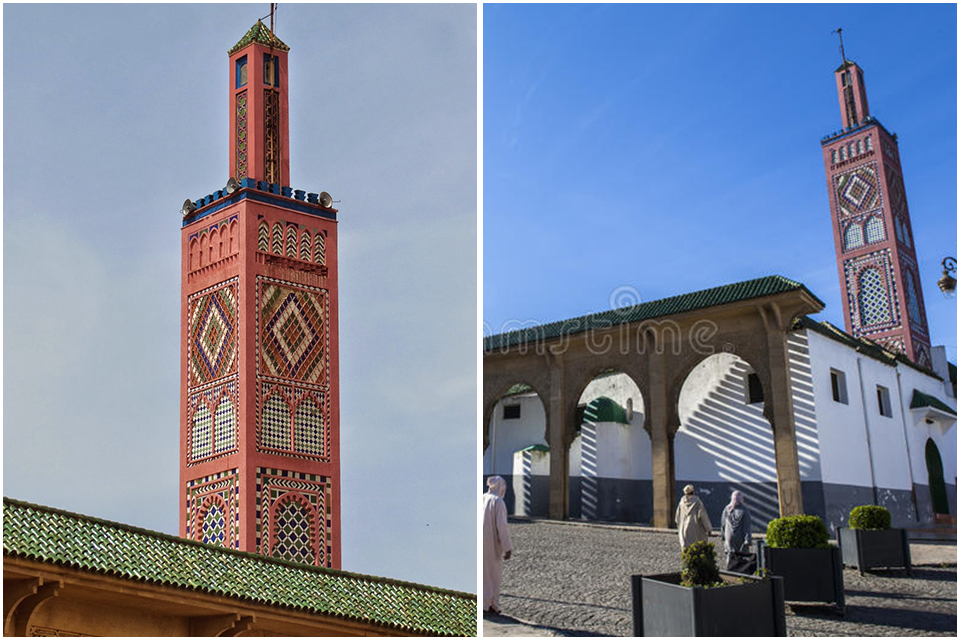 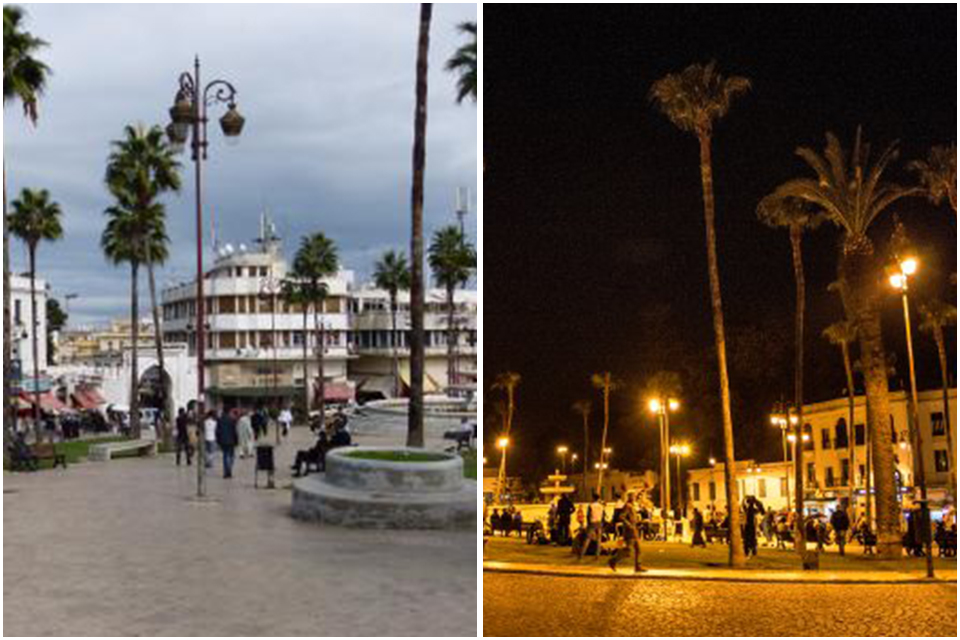 The Place du 9 Avril 1947 is one of the most important squares in the city. It symbolises the coming of King Mohamed V and his speech in the city, which at that time was under international domination.
The square is planted with trees and flowers and is one of the many green lungs of Tangiers. 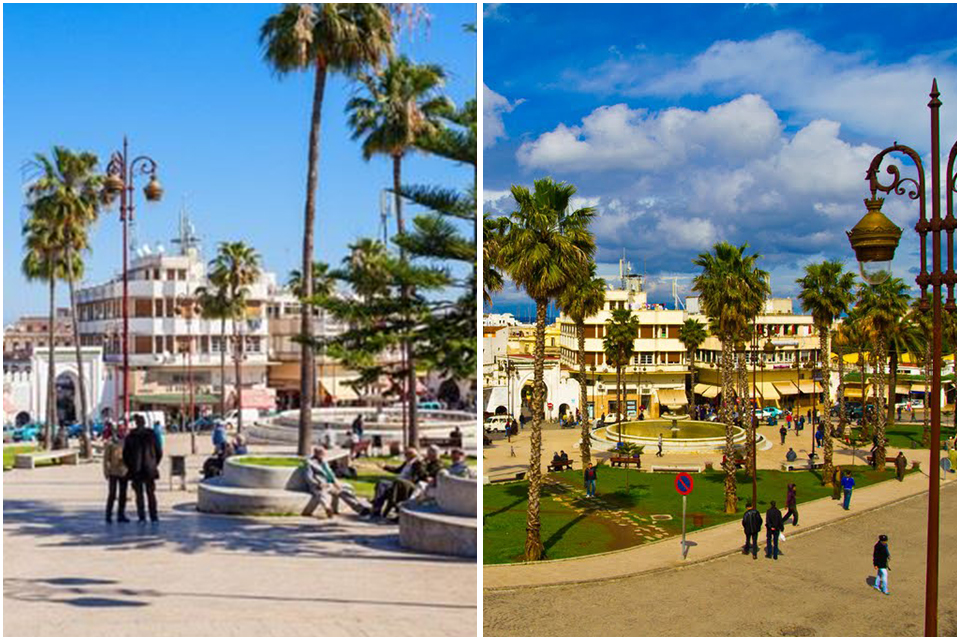 The Public Garden of the city of Tangiers is located near the Place Moulay Abdelaziz and the Badr Mosque.
The place is ideal for a romantic or family Sunday stroll.
Benches and flowerbeds as well as large areas of greenery are available to visitors for a moment of relaxation with the soft song of birds as a background. 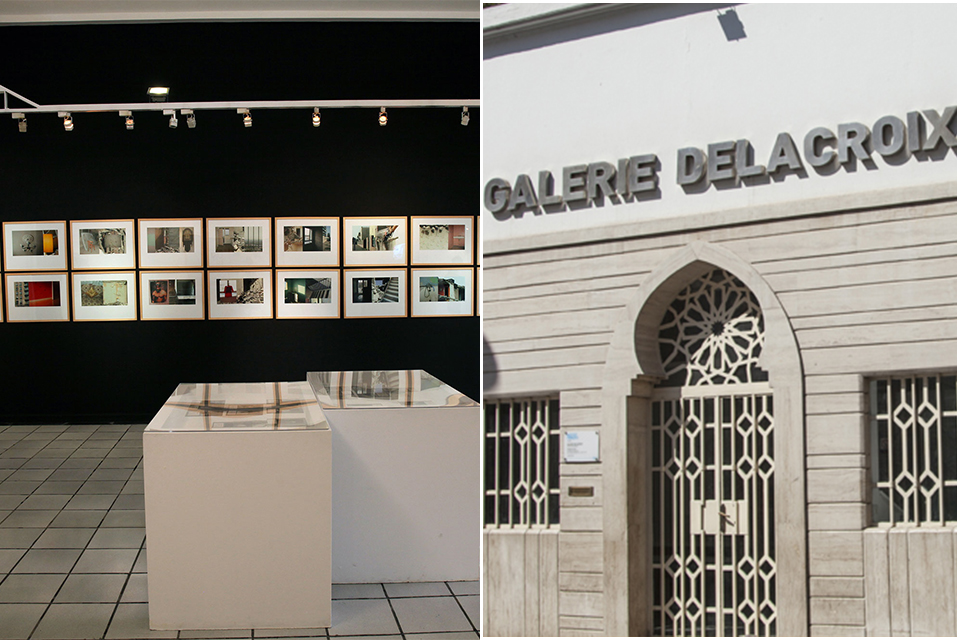 Galerie Delacroix was created in 1987 next to the French Consulate. The French Institute of Tangiers is the only one in the city to have a large exhibition hall of its own, outside its walls.
About ten events are initiated each year around works by various and varied artists, local or international, known or unknown.
The Delacroix gallery also regularly invites artists in residence for a few weeks from its engraving studio located in Tetouan. 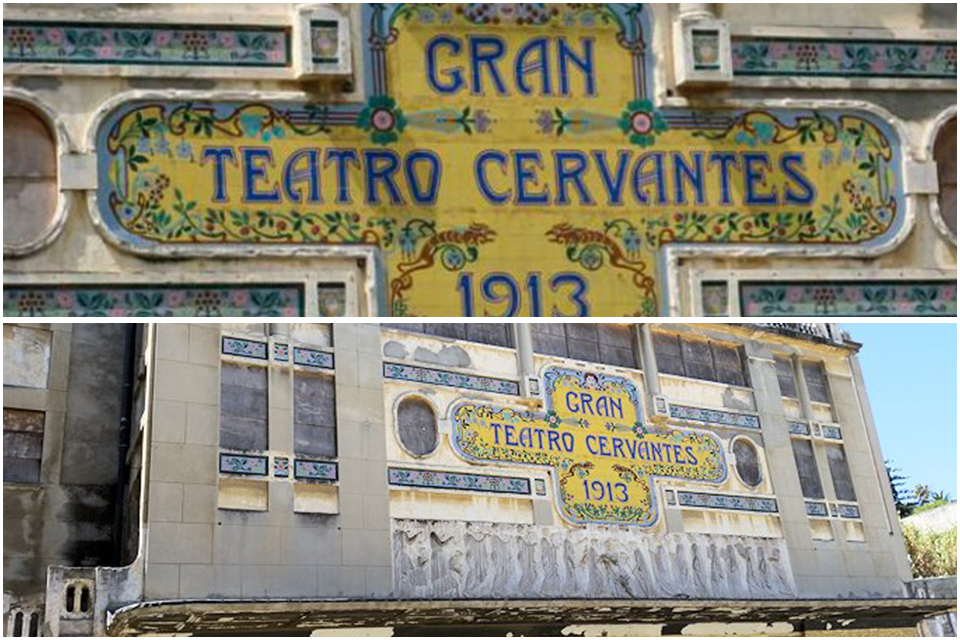 The Cervantes Theatre in Tangiers was opened in 1913. At the beginning of the 20th century, it was one of the best-known theatres in North Africa. Antonio Gallego and his wife were the owners of this theatre, they built it to bring a bit of their Spanish culture to Morocco, during the colonisation of the city.

It had the most efficient machinery and 1,400 seats that entranced visitors, locals or those just passing through town.

The Cervantes Theatre will always be remembered with its 1910's writing on the facade by those who went there.

It is located in the city centre of Tangiers, not far from the Regional Delegation of Tourism.