It's a place full of surprises! With its countless markets, gardens, palaces and mosques, you'll be amazed. Marrakech, also called the red city is the fourth largest city of the Kingdom after Casablanca, Fez and Tangiers with 928,850 inhabitants in 2014 and remains the tourist capital of the country. More than a city, Marrakech is a pearl polished by history and a taste for hospitality, knowing how to welcome its guests with open arms for centuries.
The city is subdivided into two distinct parts: the new (or modern) city, where there are many hotel complexes, luxury shops, banks, tea rooms and café terraces, and the medina or historic city (ten kilometres of walls). It is easy to imagine the caravanners loading their camels with food, tools and handicrafts.
The souks offer everything the traveller expects: colours, atmospheres, perfumes, smiling and welcoming faces. It is the city of Morocco that represents Moroccan tourism, even if other cities deserve to be as well known for what they can offer. Marrakech is hard to turn away from. 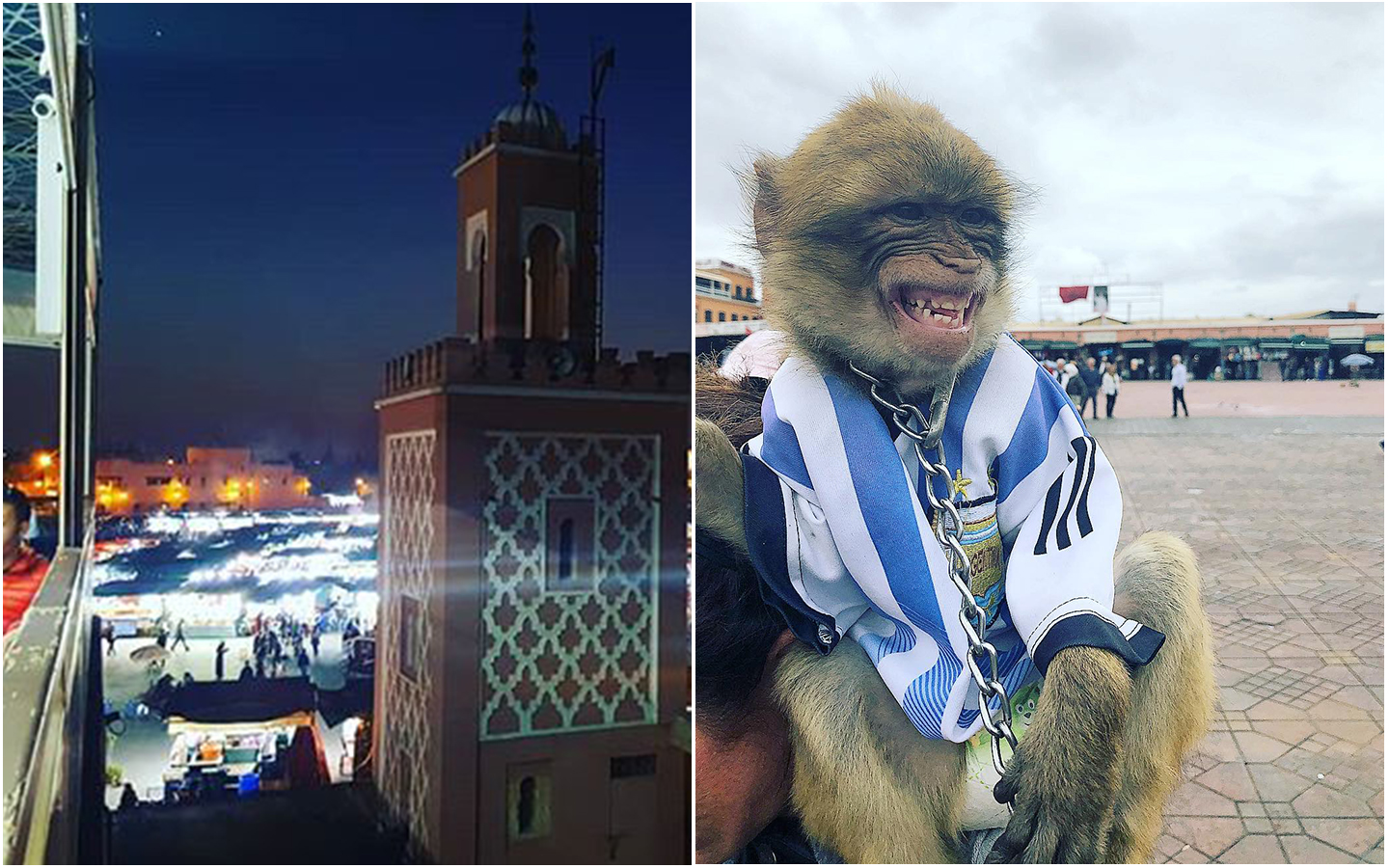 Located in the heart of the Medina, Djemaa-el-Fna square is both the geographical centre of Marrakech and the city's unmissable socio-cultural meeting place.
It is dominated by the minaret of the Quessabine mosque, between the souk and the minaret of Koutoubia.
Indeed, its name in Arabic means "assembly of the dead" and it was the place where criminals were executed and their heads nailed to the walls and exposed to the eyes of passers-by.
This is the way to reach the souks with its small streets lined with various small shops, public writers, marabouts, grigris sellers and even tooth pullers.
Around the square, you will have access to various extraordinary services such as clairvoyant consultations or magic recipes.
During the day, snake charmers, henna tattooists or monkey owners who offer photos with their animals rub shoulders with jugglers, musicians and acrobats.
They even organise amateur boxing matches there.
Don't hesitate to go up to one of the many roof terraces bordering the square to isolate yourself for a few moments from this bustling life, to taste “cornes de gazelle” accompanied by a mint tea.
One of the best times to admire the square from these ledges is when the sun starts to set, and the stalls are firing up their stoves to prepare the evening meal.
The intoxicating smoke, the tam-tams, and the glow of the lanterns that light up the stalls lend themselves very well to photography.
At night, the square is invaded by itinerant restaurants that offer delicious typical Moroccan dishes for very modest sums.
In the evenings, you can enjoy traditional and unpretentious meals at unbeatable prices.
This square alone represents the atmosphere, diversity and culture of Marrakech. 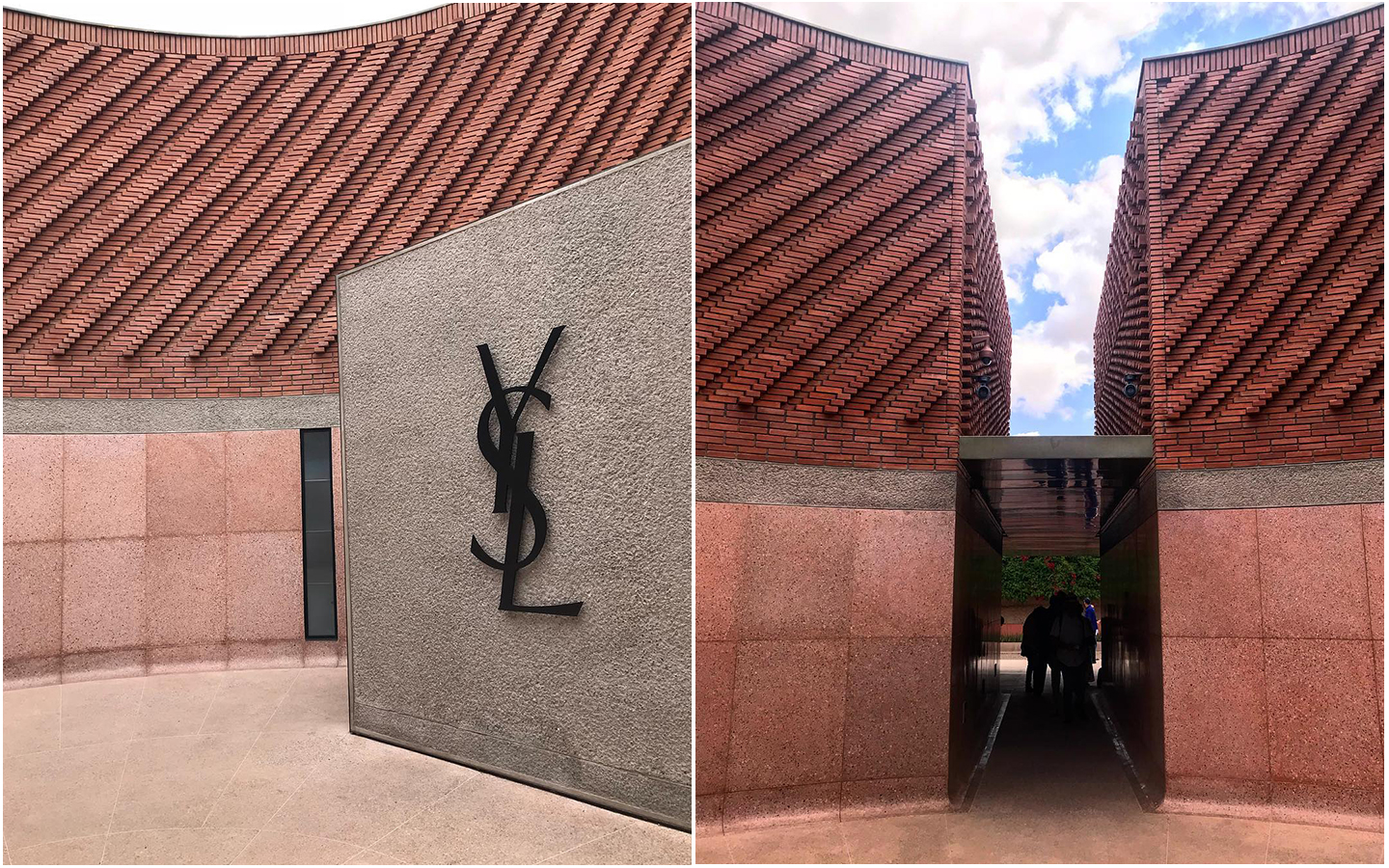 There are many museums in Marrakech but at the end of 2017, the Yves Saint Laurent Foundation opened a new museum in Marrakech dedicated to the work of the master.
At the same time as the redesign of the Parisian Foundation on Avenue Marceau, a new building designed by Olivier Marty and Karl Fournier, founders of Studio KO, with a surface area of 4000m² was created in Marrakech.
It is located in Rue Yves Saint Laurent, a few meters from the Jardin Majorelle. It’s a must see during your stay. 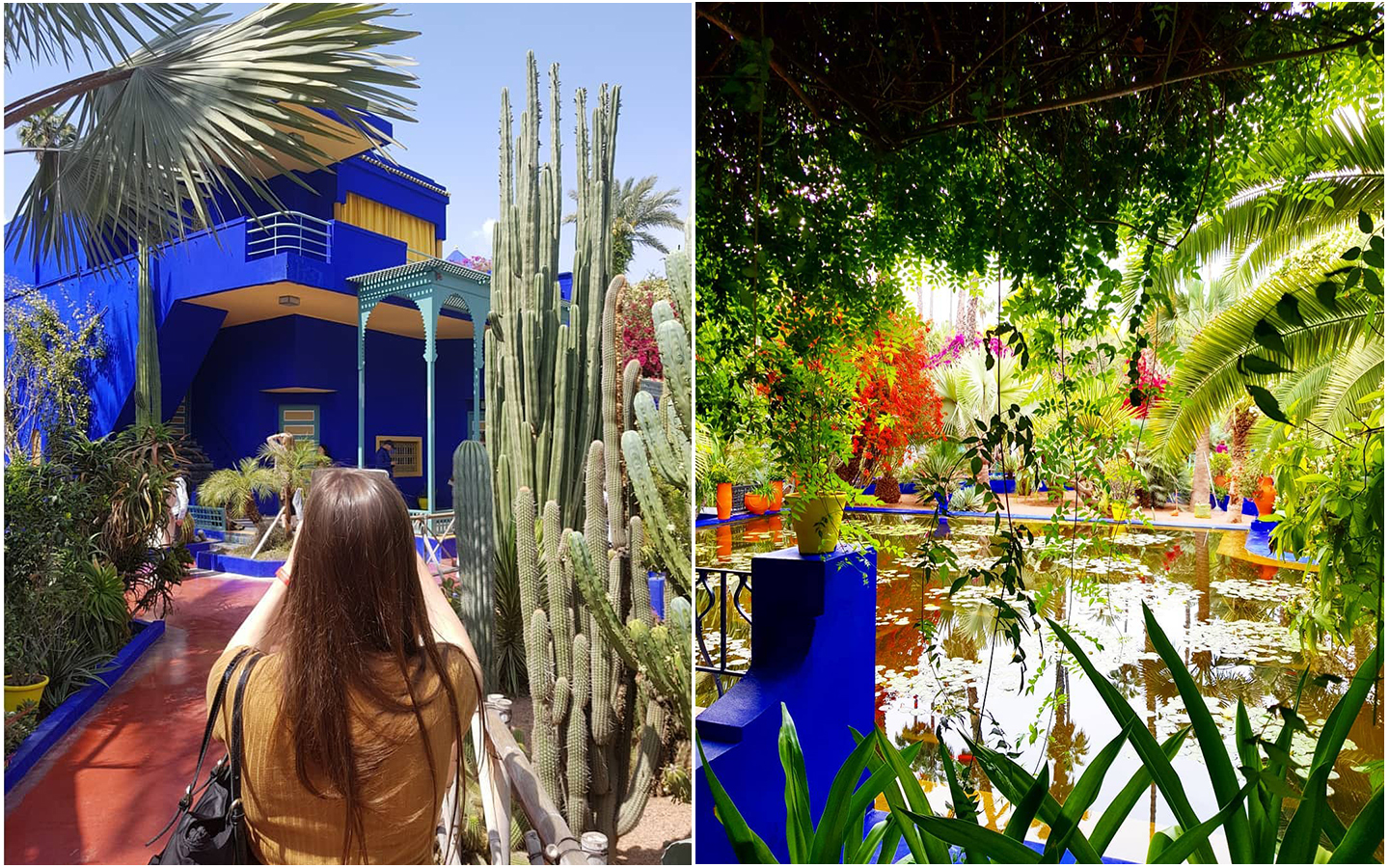 Probably the most beautiful garden in town. It will seduce nature and bird lovers of all kinds. The origin of this botanical garden goes back to Jacques Majorelle, a famous French painter of the beginning of the 20th century.
While discovering Marrakech, he fell under the spell of Morocco, its bright colours, Berber architecture, civilization and way of life.
He then decided to live in the "red city" and set up his botanical garden where he housed exotic plants, ponds and ceramic decorations.
The garden adopted the colour "Majorelle blue", which the artist created to express the depth and intensity of the ocean.
The botanical garden is considered by its creator as his main work, to which he devoted his whole life. It opened its doors to the public in 1947.
Today, the Majorelle Gardens are the property of Pierre Bergé and the foundation of Yves St Laurent who acquired this bit of paradise to protect it and ensure its durability.
This oriental garden is a must see to get away from the city and to enjoy the cooing of the birds and the bubbling water of the fountains. 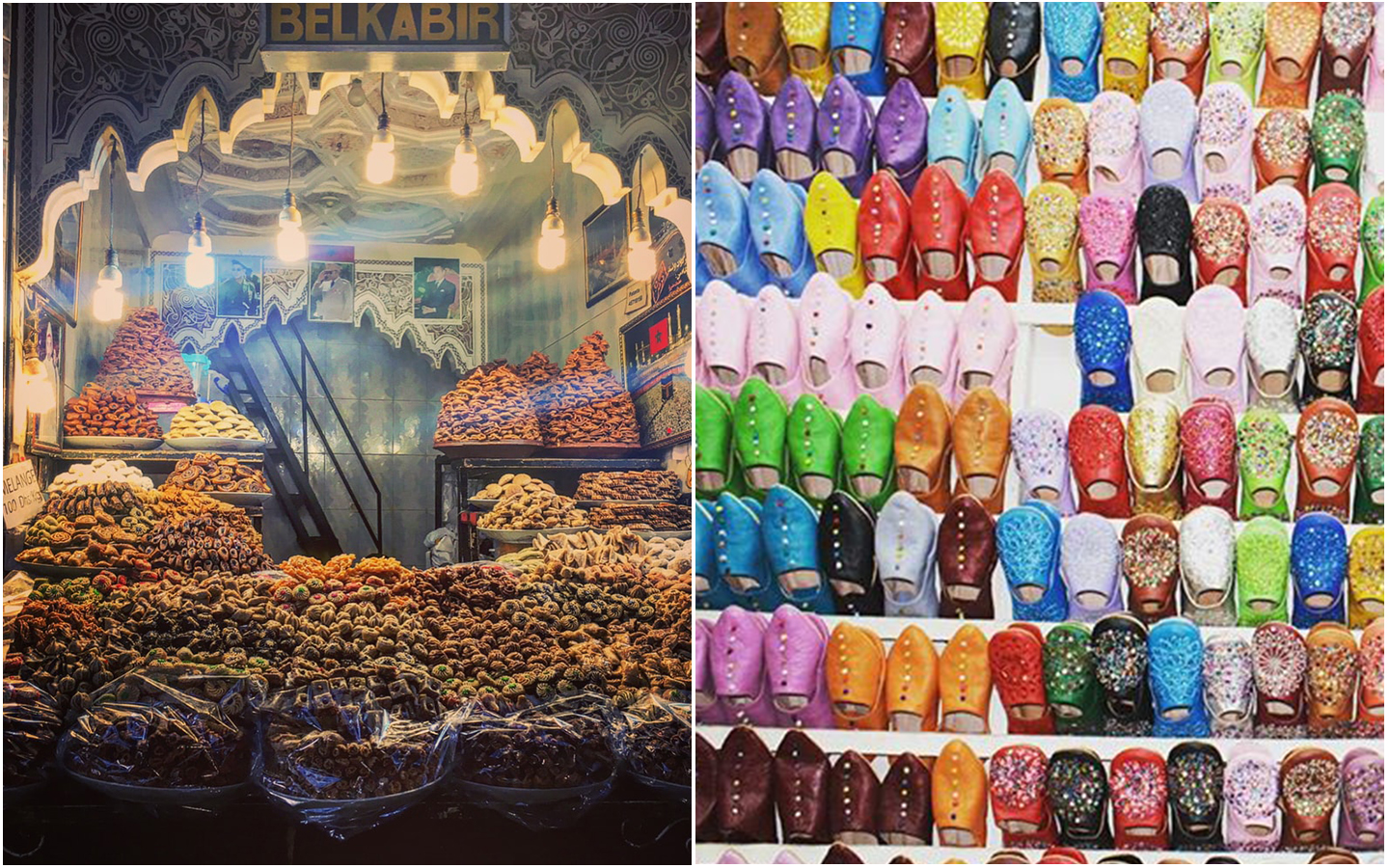 The souks of Marrakech are unique in the world by their organisation and size. They are a very rewarding experience for the visitor.
The souks are open from 8:30 am to 8 pm. They are organized by neighbourhood and by trade.
Each souk has its name, depending on the specialty, this can help a little: Ahiak: fabrics and clothing, Attarine: tin and groceries, Cherratine: leather, Chouari: basketry and wood, Dhabia: jewelers, Dlala: djellabas. El Kebir: leather goods. Eloustat: fabrics, wool, wooden cutlery, Fekharine: pottery, Haddaddine: blacksmiths and ironwork, Kassabine: basketry and spices, Les Tamis: wrought iron chandeliers and lamps, Moulay Ali: various, Nejjarine: carpenters. It’s a whole folklore to infiltrate, to discover the atmosphere of the Orient. 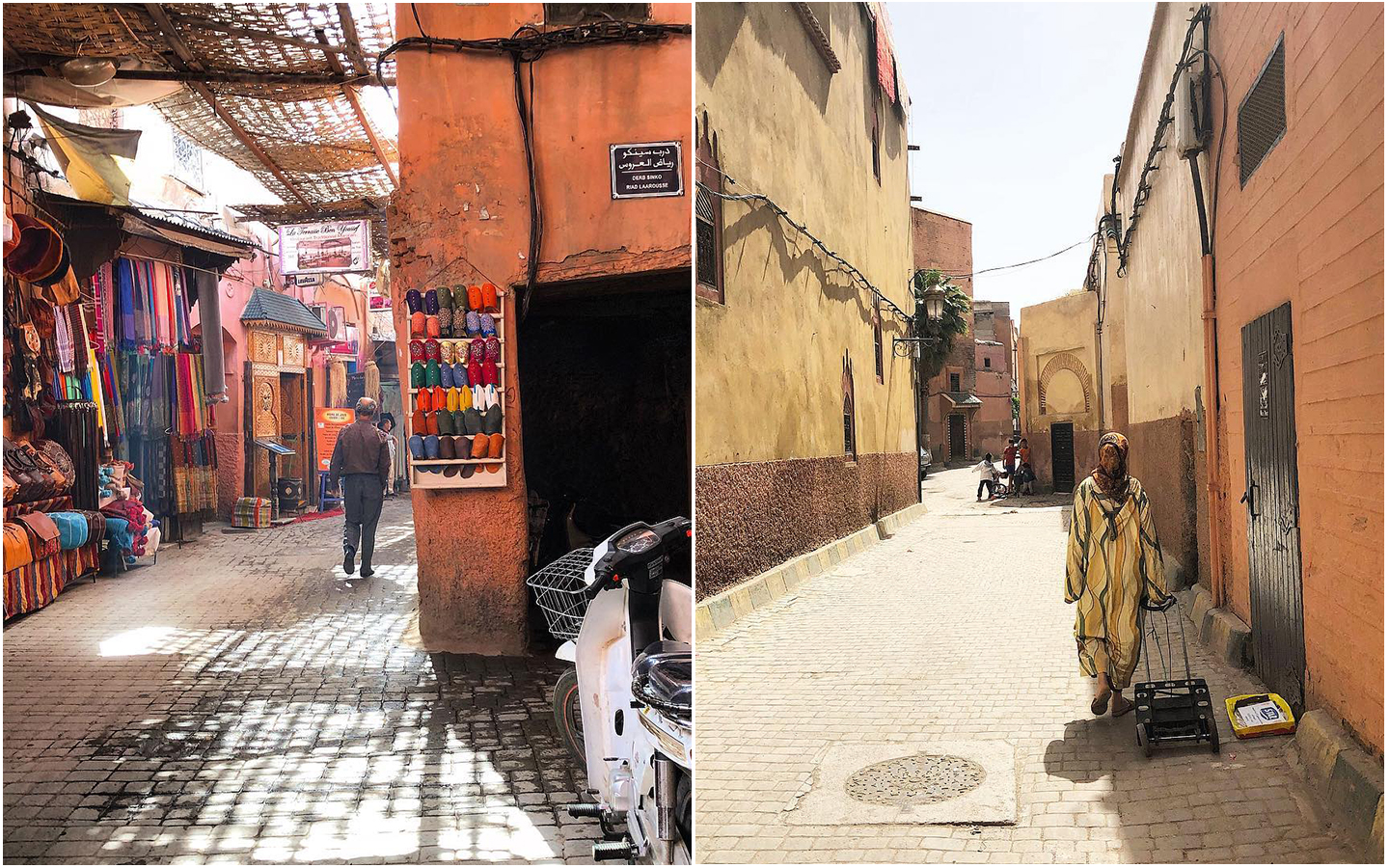 The medina is the historical centre of Marrakech, it dates from the 11th century, but it was destroyed and then rebuilt.
The alleys of the medina are narrow in the red city. Almost all the buildings, houses are ochre.
In the 12th century, a Kasbah was built to defend the city. The 8m high walls still surround the medina for almost 19 km.
The El Mansour Mosque, was built in the 12th century, during the reign of Sultan Yacoub El Mansour.
It was rebuilt in 1569, and renamed the Golden Apple Mosque, as the balls of the lantern would be made of gold. 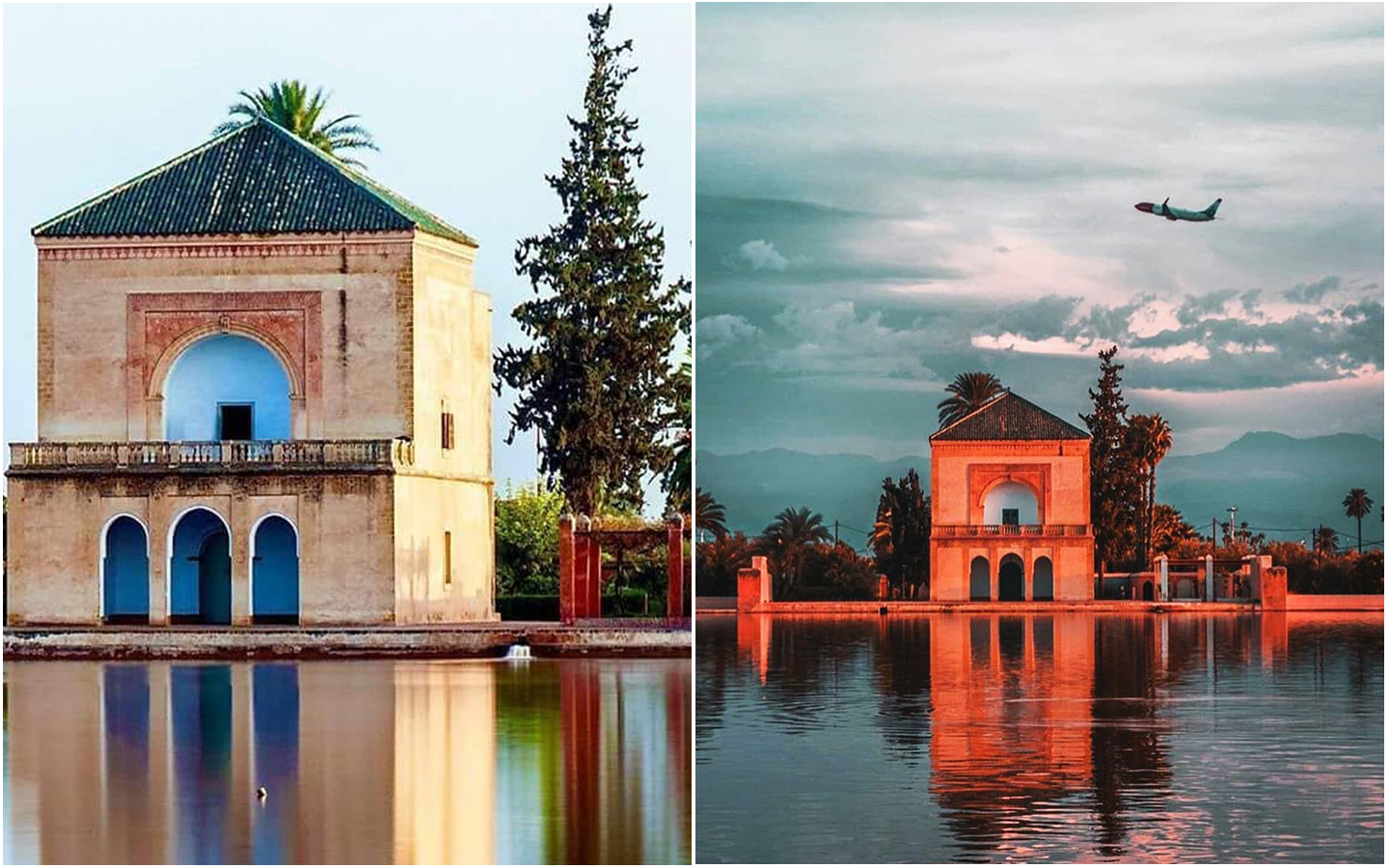 Located a few kilometres from Marrakech, the Menara is the most important olive grove of the city, extending over more than one hundred hectares.
At the centre of this garden is a lake that collects water from the mountains to irrigate crops.
Next to this expense of water built in the 12th century stands a square-shaped Saadian palace with a triangular roof, a former romantic residence of the sultans during the 19th century.
The place is ideal for walks. Cut off from the city and its hustle and bustle, visitors will appreciate coming to recharge their batteries in this corner of greenery. 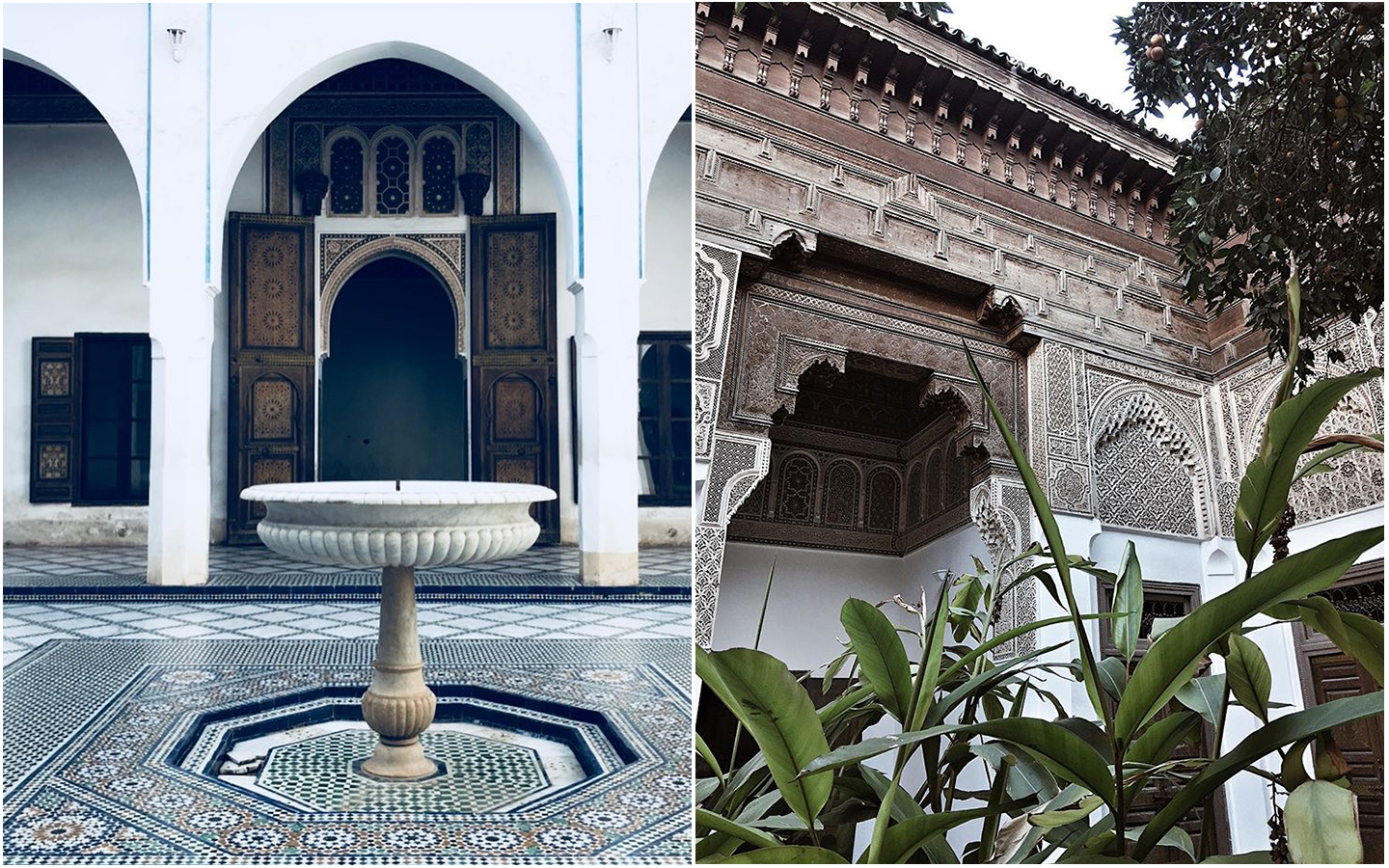 The Bahia Palace is not a ancient historical place like the other monuments in Marrakech. However, the site is known for the richness of its architecture.
Its construction is recent, 19th century, and was inspired by Arab and Andalusian styles. The foundations of the palace appeared in 1880 by order of the vizier Sidi Moussa, who ran the Moroccan kingdom.
He wanted to build a luxurious residence for the pleasure of one of his companions. He then offered her a palace with about 160 rooms.
This provides an explanation for the name of the monument meaning "palace of the beautiful". Around the building, visitors are able to stroll through the courtyards and gardens that used to distract its occupants.
Small anecdote: The construction period of the Bahia Palace (7 years) is at the origin of a famous Moroccan expression: "the Bahia is finally finished", used when a case remains unsolved for a long time ! 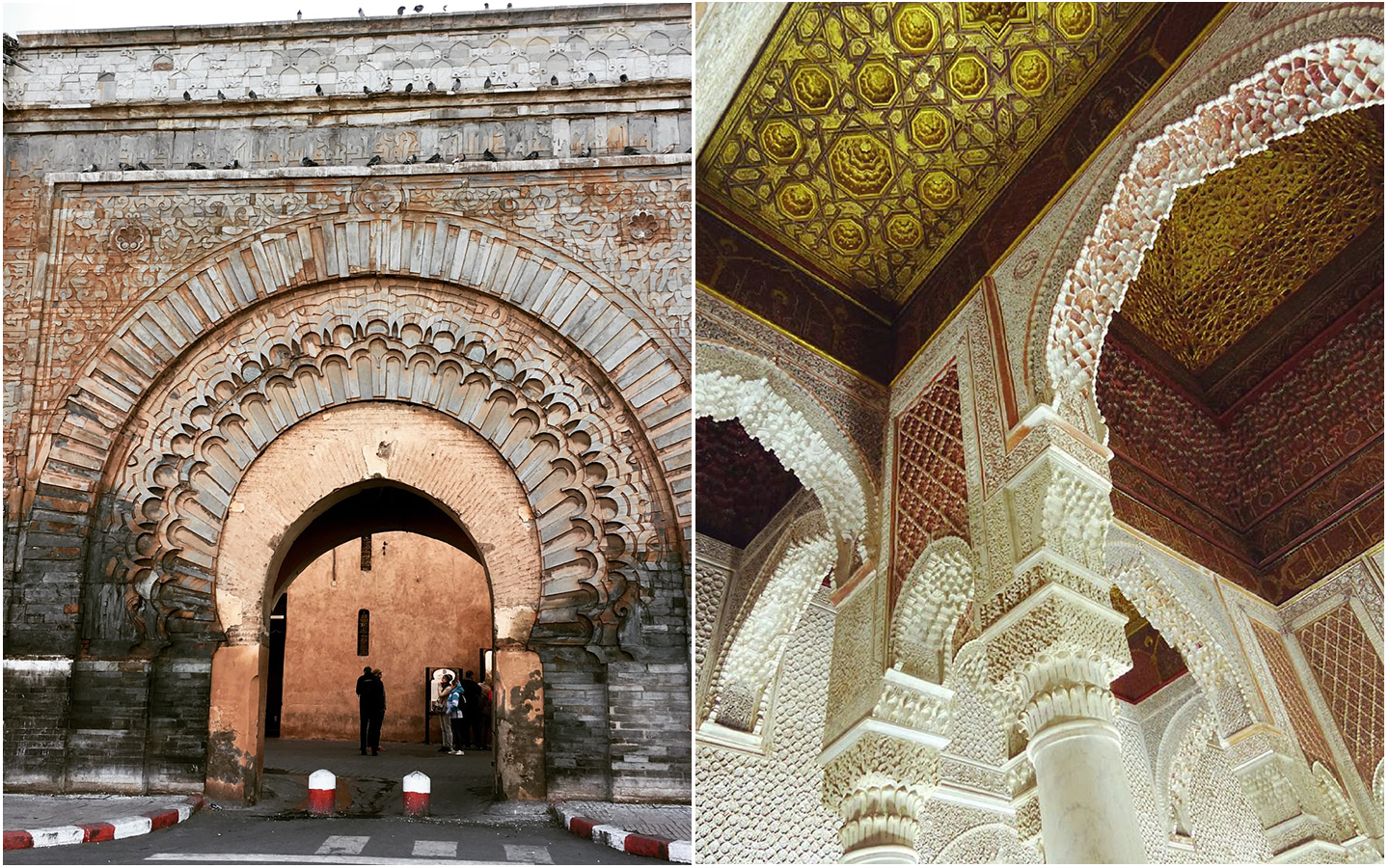 Considered one of the most important gateways to the medina of Marrakech, Bab Agnaou was built in the 13th century by the Almohads to protect access to the administrative and military district of the Kasbah.
Bab Agnau is composed of four arches and around the arches is a frieze which shows a verse from the Qur'an written in kufic script. This unique feature is one of the stand-out points of this door of Marrakech. 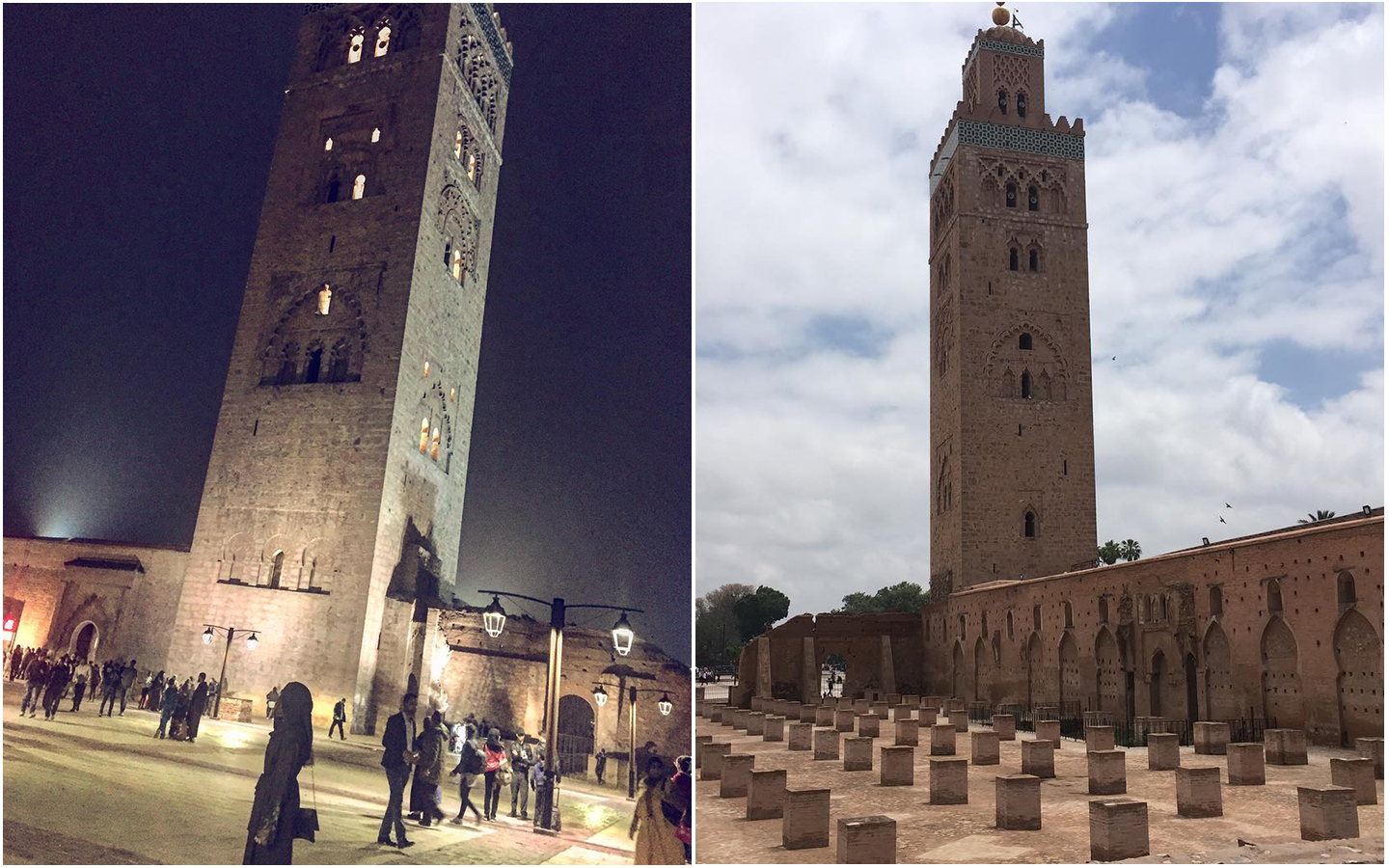 The Koutoubia Mosque is the largest mosque in Marrakech, Morocco. It is located in the district of the south-west medina of Marrakech.
The mosque is decorated with curved windows, a ceramic band, pointed merlons and decorative arches; it has a large square with gardens, and is lit at night.
With the Djemaa-el-Fna square, these two places are the recognisable symbols of Marrakech. 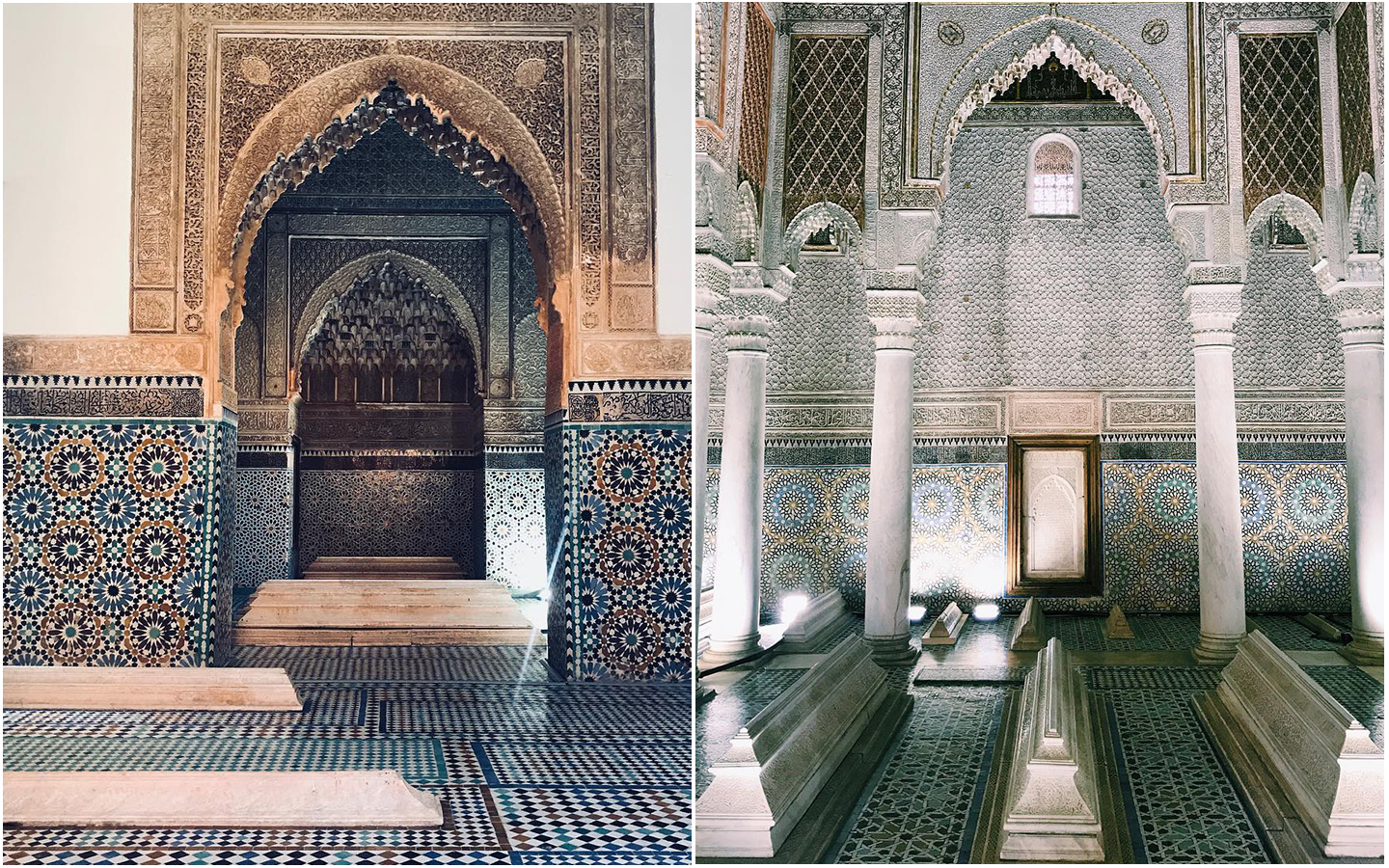 Enter the Saadian tombs and discover a rich history and breath-taking ornamentation! The foundations of these tombs date back to the 16th century, and the enlargement of this site was further developed according to the wishes of Sultan Ahmed al-Mansur Saadi.
The site became a royal necropolis in 1557 following the burial of the first Saadian prince.
Nevertheless, these monuments were only discovered in the contemporary era, around 1917. They were then passed on to to the Fine Arts departments for their restoration.
The mausoleum is home to some sixty Saadians, an Arab dynasty that ruled Morocco from 1524 to 1659 and took care to embellish the site throughout their sovereignty. The monument consists of a chapel and three funeral rooms.
The decoration of the three rooms is inspired by the Hispano-Moorish style.
In the courtyard of the mausoleum are grouped tombs of the Saadian soldiers near the necropolis garden. Guides are at your disposal for the visit of the tombs, it is however possible to make this discovery by yourself. 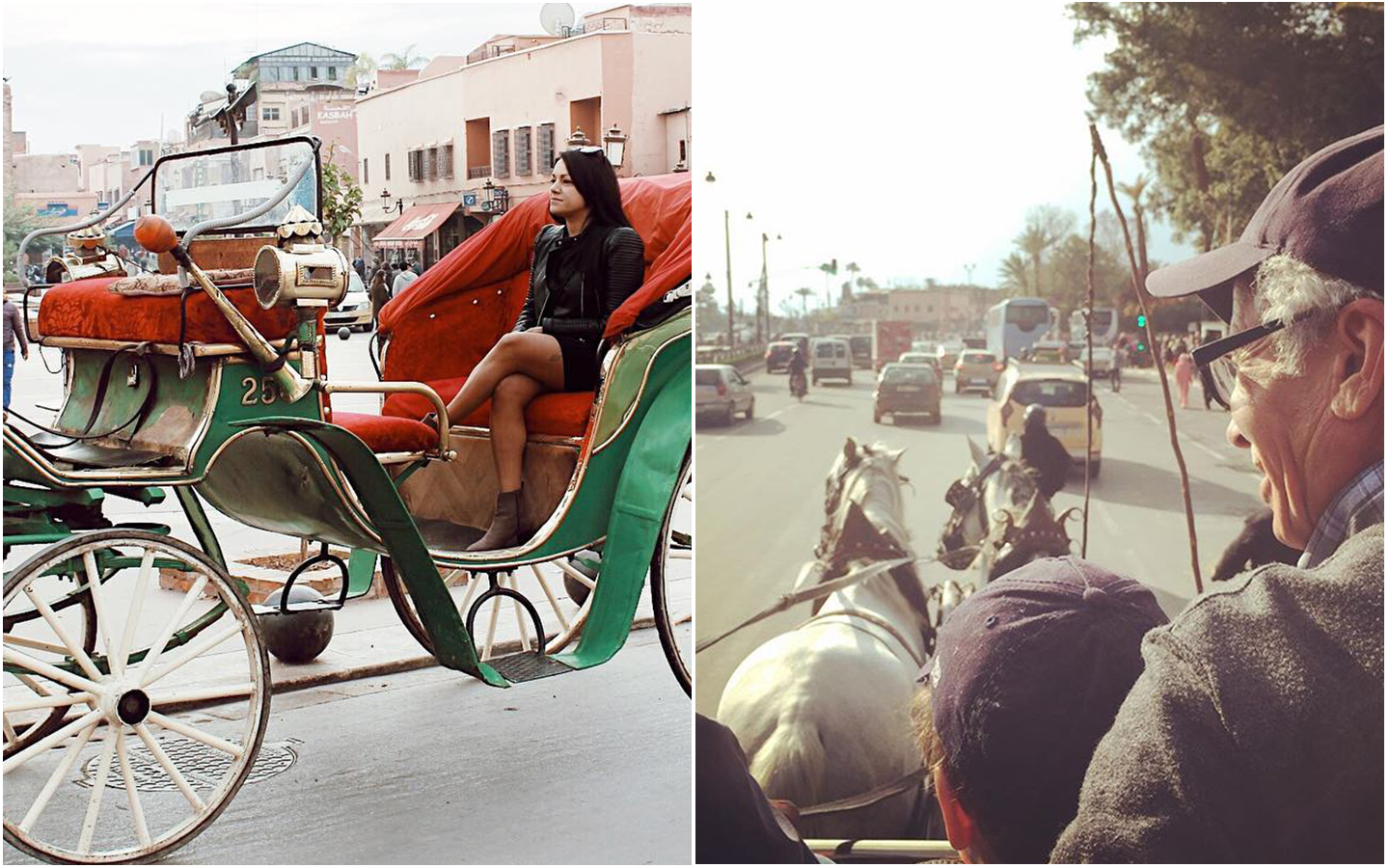 For more than 200 years, the horse-drawn carriage has been an essential means of transport in the streets of Marrakech.
Once inside the horse-drawn carriage, you will feel as if you are enveloped in a peaceful bubble, you will be able to recharge your batteries while admiring the landscape and the passers-by. Ask for the price of the journey before leaving so as not to get a nasty surprise at the end. 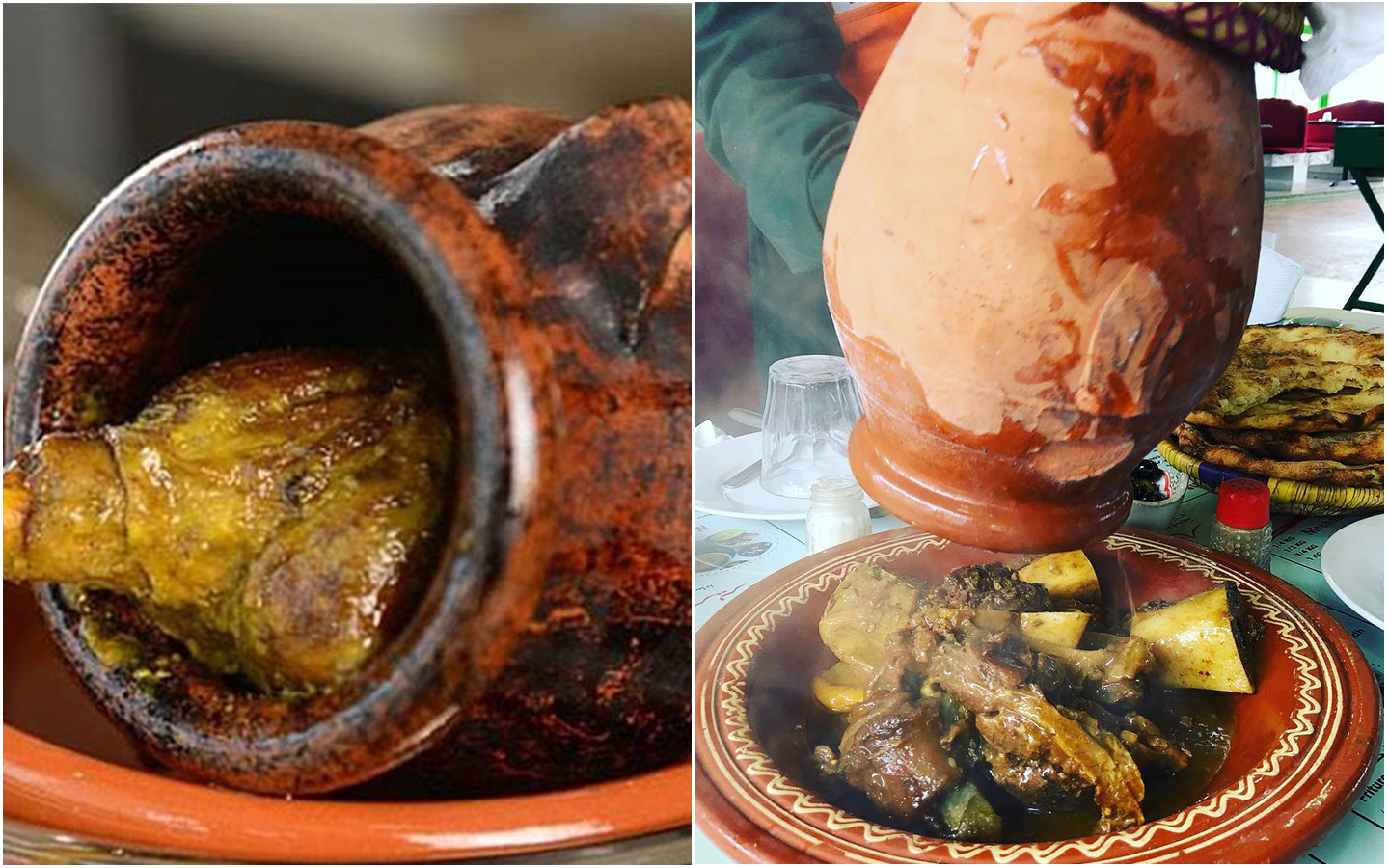