Morocco is a country where arboriculture plays an important role and it has many species of trees.
Morocco, as a country through which people and fauna transit, has experienced and still experiences plant species introductions. Whether voluntarily (introduction) or accidentally (seeds brought in mixed with grains, by ocean currents, winds, birds or travellers), these trees, which have since "colonised" Morocco, have been able to adapt to climatic and land conditions and have become well integrated into the natural landscape of the Kingdom. 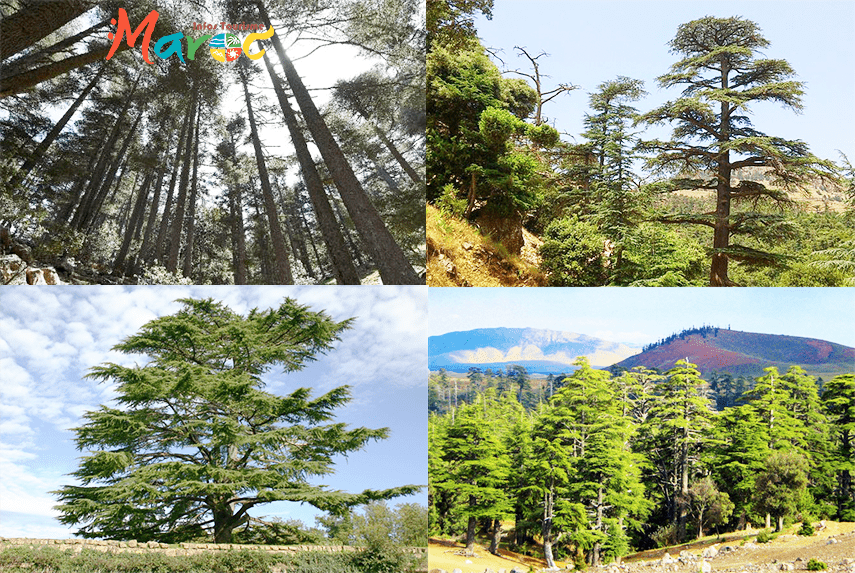 On 134,000 hectares, Morocco has the largest cedar plantation in the Mediterranean basin.
The "Cedrus atlantica" is little known compared to its Lebanese cousin, the "Cedrus libani" which grows on 2,000 hectares in Lebanon, the "land of the Cedars".
In Morocco, the cedar is considered a "national treasure" because it is both a tourist attraction and a tree whose wood is highly prized by cabinetmakers. A request for classification as a "biosphere reserve" and "world heritage" is under consideration.
Near Azrou, in the heart of the Middle Atlas Mountains where the largest areas are recorded, the "cedar Gouraud", 42m high and 900 years old, symbolises both the majesty and fragility of the species. This rare specimen bears the name of a French officer from the time of the protectorate. 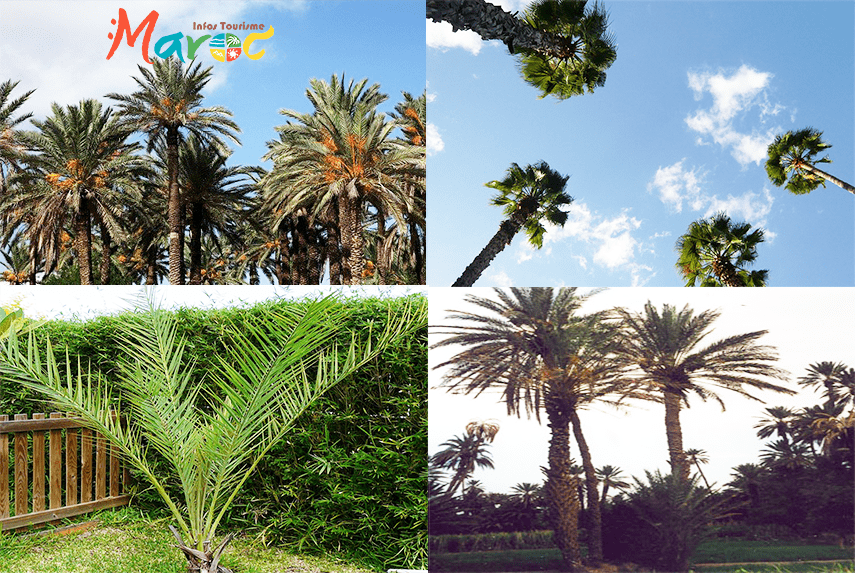 The palm tree is an element irremediably linked to the vegetation that decorates Moroccan gardens. It is enough to take a tour through the luxurious residences of private individuals or certain hotel gardens to realize the pride of place that this tree takes in any Moroccan green space.
In the south of the country, the oases along the Draa Valley were historically the first traces of civilization in which caravanners from the desert arrived at the time. In addition to being spaces for trade, oases were also places for cultural exchange.
Palms have indeed an essential place in the natural balance of palm groves. They provide shade and coolness to the fruit trees, which themselves shelter the ground-level plants.
In the face of desertification, working in the oases has become complicated and the situation of the inhabitants has gradually deteriorated. Palms are no longer profitable enough for their dates so they now occupy a decorative place in gardens. 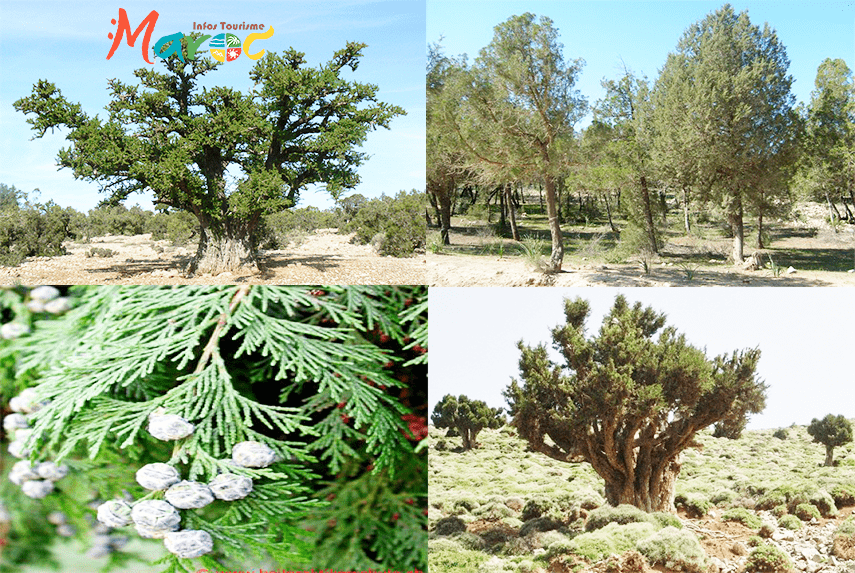 These grow at heights ranging from sea level to 1,800m above sea level in a semi-arid Mediterranean climate.
They are found in Morocco, Algeria, Tunisia and more rarely in Spain and Malta. As far as North Africa is concerned, the sandarac tree or Barbary thuja forests cover a total area of 1 million hectares, of which 600,000 ha are in Morocco.
There are also small, dense areas in the Debbouz area at altitudes above 500 metres, as well as in the Adouz area. Their wood is fashioned into wooden tables, ornaments and boxes in Essaouira in particular and is famous for exuding a pleasant scent. 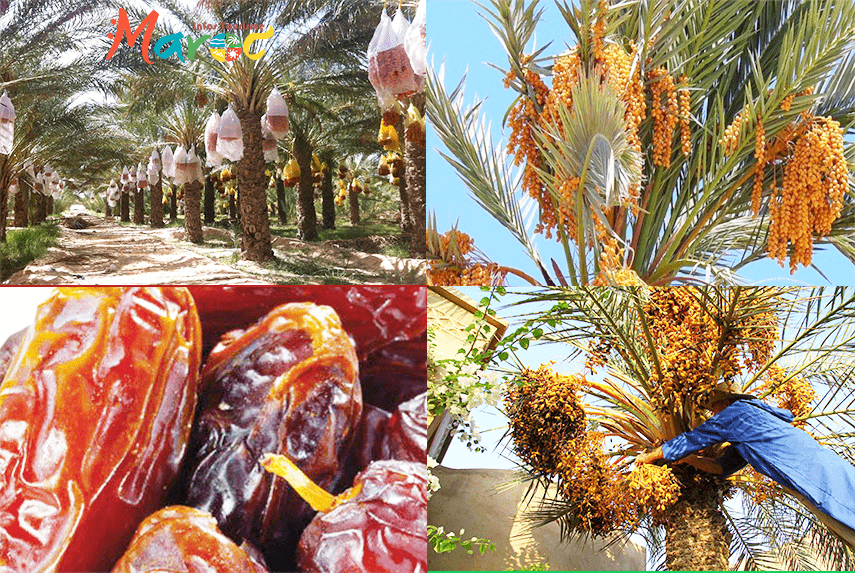 The current average area of date palms corresponds to 48,000 ha with nearly 4.8 million date palm trees of which nearly 41% are productive.
The production areas are mainly located along the Ziz and Draa valleys.
The sector contributes to up to 60% of agricultural incomes for 1 million inhabitants There is a multitude of varieties cultivated such as Medjoul, Boufeggous, Bouskri and Jihel but with a predominance of khalts (unidentified varieties). 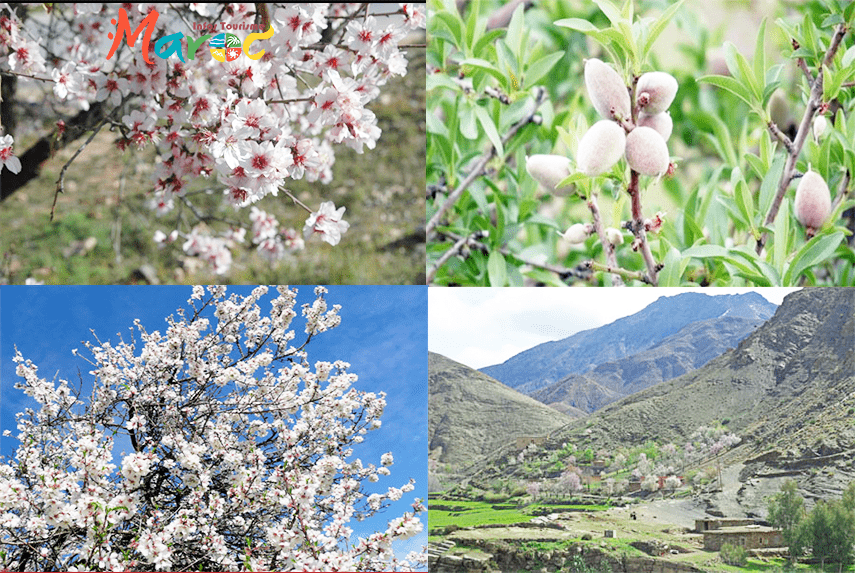 The almond tree in Morocco is the second most important tree species after the olive tree. It occupies 73% of the total area of rosacea.
Half of the almond trees (six million) are seedlings. They are located mainly along the valleys of the main rivers in the south of the country and in some mountain areas.
Hardy varieties were chosen to allow the selection of trees that would do well individually. The other half of the trees are cultivated intensively and semi-intensively in regular plantations and as part of soil protection and restoration. 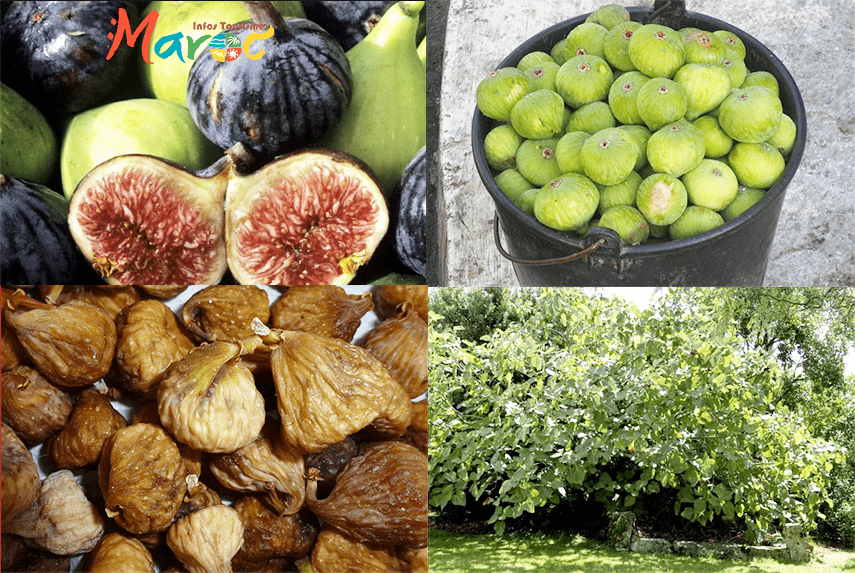 The fig tree occupies a total area of 46,000 hectares (ha), or 5% of Morocco's arboreal heritage. Domestic production is estimated at 57,000 tonnes, with an average yield of 1.2 tonnes/ha. Cultivation is mainly located in mountainous areas, on poor, slaty and marly soil in the Rif and in Chefchaouen or calcareous soils. It is found on terrain that is often rugged and needs to receive very little care.
The five main production areas are: Taounate (22,230 ha), Chefchaouen (7,050 ha), Al Hoceima (5,000 ha), Ouazzane (3,150 ha), Tetouan (2,000 ha). The other plantations are distributed between Taza, Nador, Essaouira, El Jadida and Safi. However, fig cultivation is declining and is often replaced by cereals. 3 species can be recognized by the colour of their fruits and their harvest times. 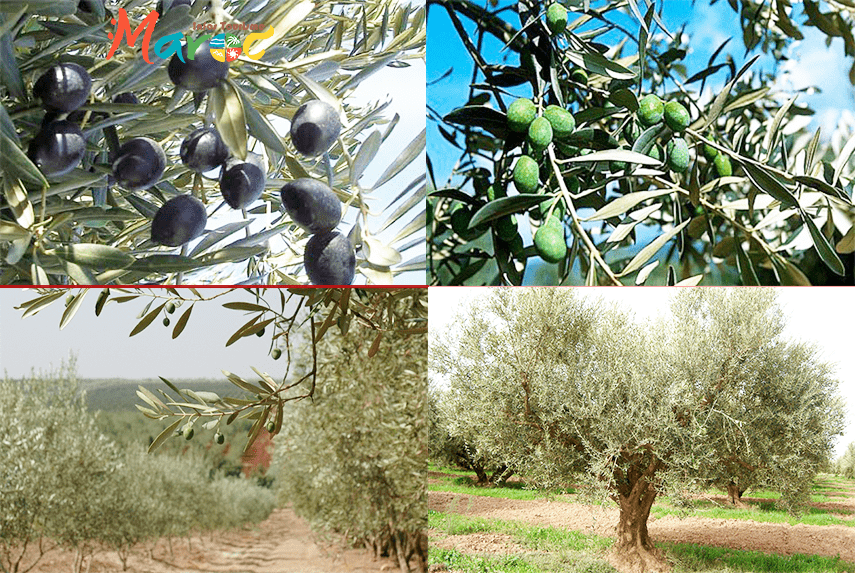 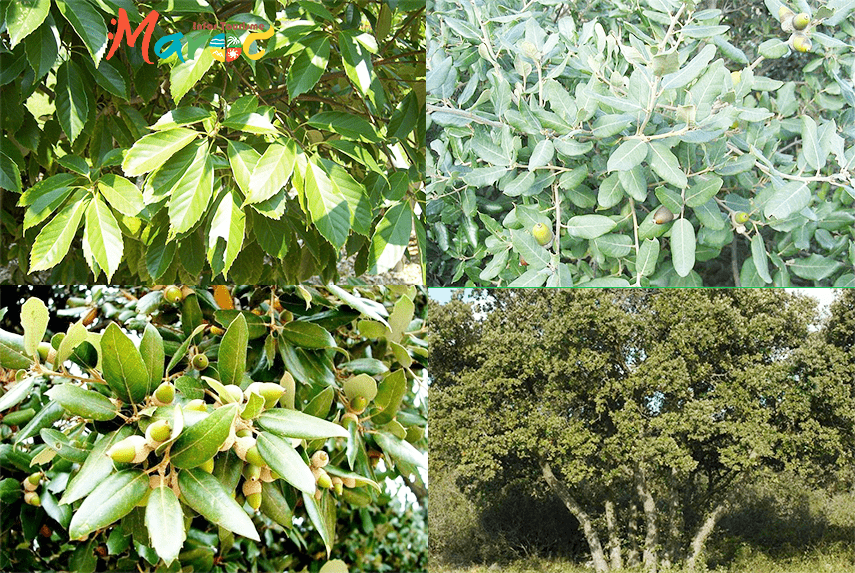 In Morocco, the holm oak is the premier forest species by its surface area (1,415,201 ha) and for its production of firewood. Moreover, its ecological and socio-economic roles are very important everywhere. Present in all non-arid regions of the country, it is described as "the living cement that connects the forest massifs".
Its altitudinal range is between 300m and 2,700m. Normally, it occupies an intermediate position between the eastern white cedar at the base and the cedar or thuriferous juniper at the top, but it can sometimes form the upper limit of forest vegetation, as is the case in the High Atlas (Seksaoua), where thuriferous trees are absent.
Holm oak is widespread in humid and sub-humid, locally semi-arid, temperate, cool and cold bioclimates, on all types of substrates. Its stands are very heterogeneous, but pure green oak trees are not rare. Because of its ecological adaptability, its resistance to damage and its great dynamism, it is ubiquitous in the daily life of foresters, farmers and rural populations.

Small in size, the cork oak rarely exceeds 20 metres. It is a typically Mediterranean species. This tree can live for 150 to 200 years, some have reached 800 years and extend 20m to 25m in height (the tallest having reached 43m).

Consider these magnificent living beings at their true value. A hundred-year-old tree carries a very strong symbolism with it and above all testifies to the fragility of life. It can be cut down in a few seconds despite overcoming the many requirements needed to survive its first years, but it can transcend the ages if it is lucky enough to be spared. 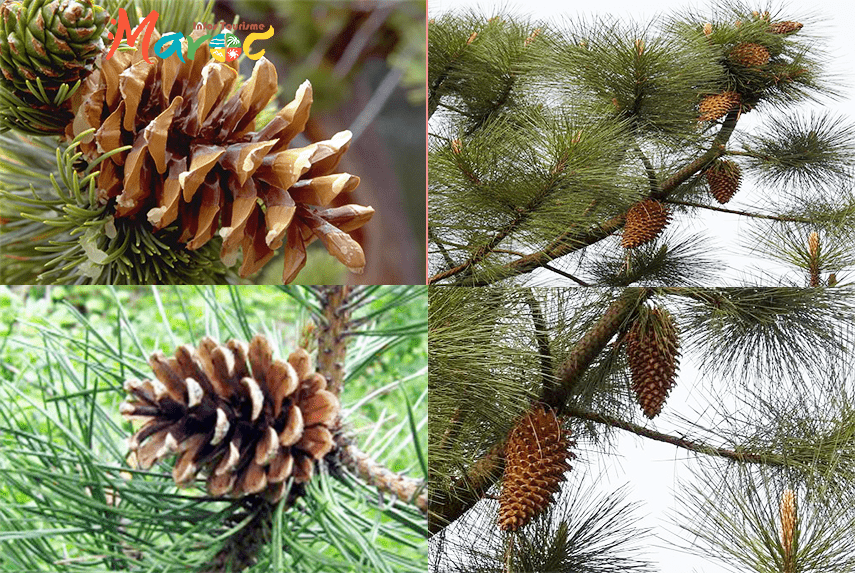 The genus Pinus is represented in Morocco by three species, the Aleppo Pine; the Maritime Pine with two subspecies, moghrebiana which is endemic to Morocco and iberica which is found mainly in Spain; and the Black Pine of Morocco. 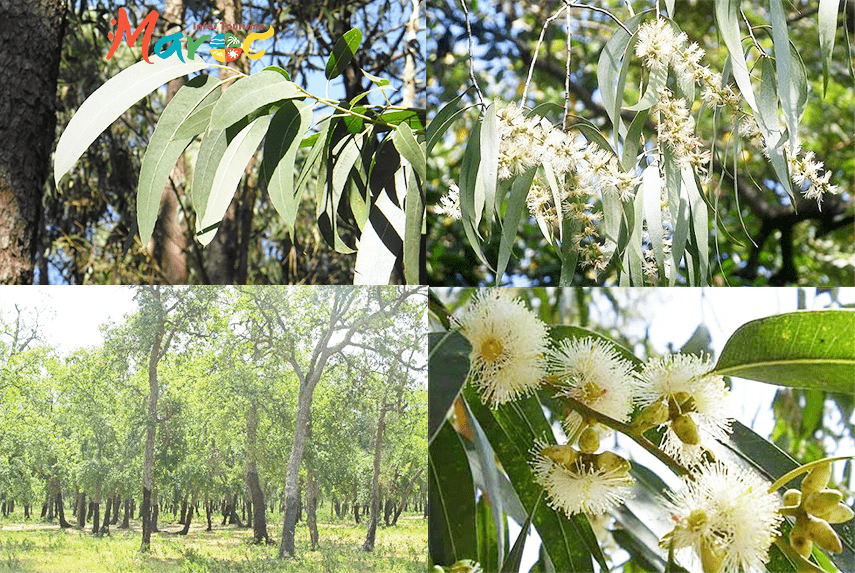 Eucalyptus trees belong to the family Myrtaceae, which is represented in North Africa by the common myrtle (Myrtuscommunis), a widespread shrub. Their natural area is the Australian continent where they form an extremely important genus containing nearly six hundred species or varieties.
Eucalyptus has been introduced to every other continent and in particular to North Africa where it is part of the landscape along with the main natural species.
Plantations have been established throughout the national territory, particularly on the Atlantic coast and in the plains. The most important plantations were established in the Gharb and in the Mamora wastelands, which led to the installation of the Sidi Yahia cellulose factory in the Gharb.
Most Eucalyptus trees are extremely robust and their physiological vigour and powerful root competition allow them to gradually dominate and out-compete other species that are anywhere near them. They are also characterized by their remarkable adaptability, both from a climatic and soil point of view. 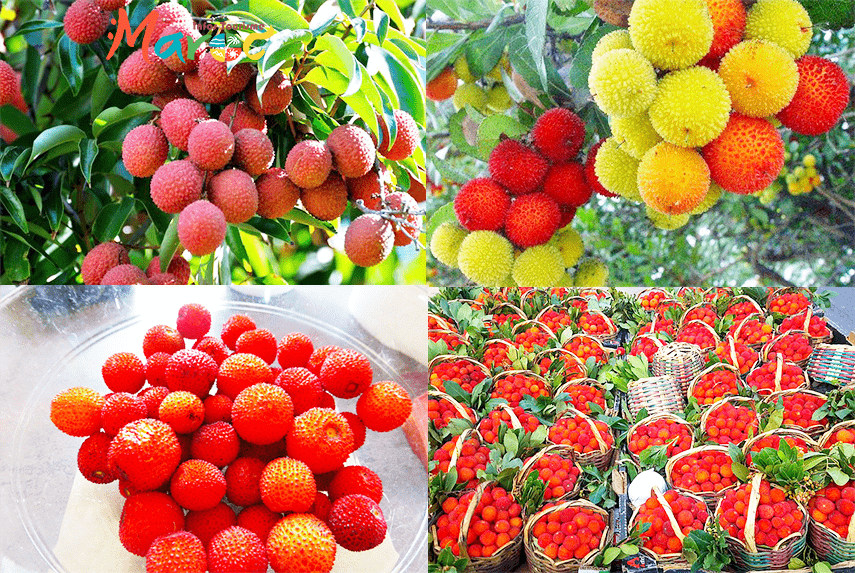 The arbutus tree or arbutus unedo is a species of shrubs and small trees of the Ericaceae family.
Native to the Mediterranean basin, this tree is widespread in Corsica and the South of France.
It is also present in Spain, Morocco and Algeria, where its fruit called arbutus is highly appreciated. The round, fleshy and red fruit of this tree is also called "Chinese strawberry".
This tree, sometimes nicknamed the "strawberry tree", is one of the few to bear fruit in winter, which makes it a beautiful decorative garden tree and allows bees to produce medicinal honey. 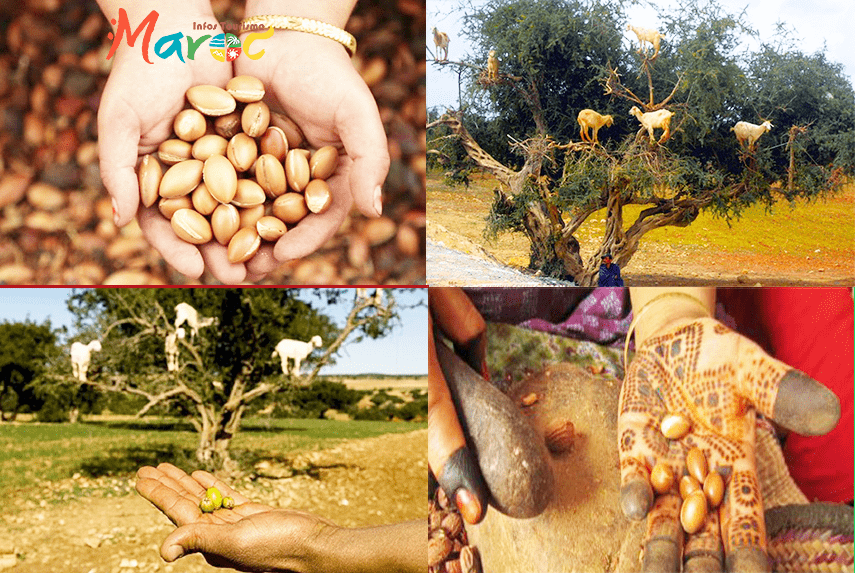 The argan tree is a small tree endemic to Morocco, mainly present in the Souss plain in the arid south-west of the country. The argan tree takes its name from the Berber "argân", but is also sometimes called the olive tree of Morocco, the iron tree or even the goat tree. Indeed, the latter are particularly fond of its leaves and fruits and are wont to climb them, despite the thorns on its branches. Argan oil is extracted from the argan nuts, a true Moroccan green gold, which is listed as a UNESCO heritage crop.